Walking in the Spirit: My Esoteric Journey while on ATS

posted on Jul, 16 2014 @ 01:57 PM
link
I do not know the right way to explain this, but I do know that there are many on this forum that are on a path searching for the truth of all matters. To the extent that any of this information is helpful in your journey, I'll do my best to remain explain and draw a distinction between the material and spiritual. Many of those that religions called prophets or gods often when speaking to people, spoke of having wisdom to hear the words that were being conveyed, because people naturally tend to interpret language in a material sense, but in actuality these prophets spoke of spiritual wisdom embedded in materialized stories and concepts.

I started on this forum years ago. I've been through the gambit of each and every conspiracy theory out there. I joined this forum because I was experiencing some sort of questioning that I am quite sure most people go through in their early adult years. That is, the world we were told existed, the reasons and justifications for the structures of our society, all began to come into conflict with the reality of the what really was occurring. In a sense, the lie I had been told was dissolving and if all was a lie or deception, then where was the truth. So the conspiracies began. I delved deep into the abyss of conspiracy world.

I remember first coming to think that there was this new world order, some group trying to control the whole world. I literally had heart beat fluctuations as my mind tried to envision how anyone could be so wicked and how in the world we could all be so oblivious. I went down the alien path, learning of alien abductions and alien creation. I learned of the growing earth theories, the holes to the inner world at the North pole. 9/11 conspiracies and political corruption, involvement of media in some crazy plan to control and herd the population. I believed some things, discarded others, fought for my opinion, opposed others. I became a conservative, a libertarian, and then a social libertarian. I learned that in our attempt to label ourselves, most of us have differing ideas of what each label actually means. Thus, the idea of labels lost its hold on me.

In my real life, during this period of time, everything I had tried to do seem to fall apart, and the economy didn't help. Forces beyond my ability to control often got into the way, and some of those forces were people with their own agenda conflicting with my own. The world around me was changing rapidly, too fast to even keep up. People it seemed changed overnight to something unrecognizable from just a few years earlier. The nastiness of people seem to be getting out of hand and often on ATS I would need to take breaks as there were those so bent on asserting their opinions of matters that they ridiculed others to get their point across.

I explored spiritual subjects and conspiracies related to such topics. I read about the new agers that they were demons, and it was the new one world religion that would spread all over earth. Often the people spreading this message used horrific graphics of demons and sadistic symbols in their videos and posts to strike fear into others. I learned and explored topics relating to the mark of the beast, read about the FEMA death camps (btw, why aren't they using these for the flood of illegal immigrants?), and questioned various other topics related to the same.

At the end of it all...I've come to realize that all of it--every experience and every bit of information you come across is there for a reason. And yet at the same time it’s all bull#, because it doesn’t matter. It doesn’t matter that there is a conspiracy to control the world, I’m quite sure there is. It doesn’t matter whether there are aliens or not. It doesn’t matter whether there is a hole to the inner earth at the North pole, or that a chip will be implanted in your skin to monitor your every move. It doesn’t matter that the politicians in office are spending our money like they don’t have to pay it back. The fact is all of us will one-day perish from this world, and none of this matters. But all of this is important. The fact that you question your reality is the important part. Whether you believe it or not does not matter, nor does it matter that you will ever figure it out. The trick is to continue to question and stay informed, focusing not on whether a conspiracy is true but whether you will be shackled and base your decisions and life on this.

And this leads me to the walking in the spirit part. You have two choices in this world as I see it. Be influence by the spiritual or material worlds. Very simply if you walk in the spirit your motivations are influenced by the spiritual. If you walk in the material world your motivations for every act is influenced by the material. Some might conjecture that all acts are motivated by the material, but I’ve found that this is only true where your motivation lays. If you walk around desiring nothing but peace on earth, and let’s assume this is the only thought in your head, then it would follow that all of your actions would exude peaceful tendencies. Thus if you desire wealth, your actions in this world will be motived by the dollar bill and you will thus act accordingly. This distinction is what I believe Jesus referred to as you can’t serve two masters. You cannot serve the material world, at the same time serve spiritual desires. Although it is possible for two people to give money to charity, one motivated by doing a good deed because others would approve, and the other motivated by their desire to help another person because they desire such.

Now before any critics attempt to jump on their high horse, I believe all of us walk in the spirit to some extent. Some more than others, and to varying degrees. Enlightenment or Gnosis as some have called it, in my experience is simply the understanding and realization, in which a person really “gets it” and they can distinguish between material and spiritual motivations. They begin to master walking in the spiritual path. There is nothing mystical about it, but it does require “faith” of the unseeable. Walking in the spirit removes your ego, as you are no longer attached to this material worlds expectations; rather, you follow your spiritual purpose.

The beauty of it all is that when a person gets to a point that they embrace the spiritual and reject the material is that you truly become free from the deception of this world. Deception and lies (some would say are the tools of the "devil", that is just a concept) are the tools which place our spirit in bondage to this material world. Only when we shed these, throw your clothes at your feet and trample them like children would, being unashamed by your past transgressions, knowing you have been freed from a life shackled to this world, then a person will let the light from within them shine. As Jesus said, “Let your light so shine before men, that they may see your good works and glorify your Father in heaven” (Matthew 5:16)

I now firmly believe that we are the answer to all the problems in this world. It starts by recognizing each of us is on a spiritual path to redemption and only when we forgive ourselves, can we forgive our neighbor. 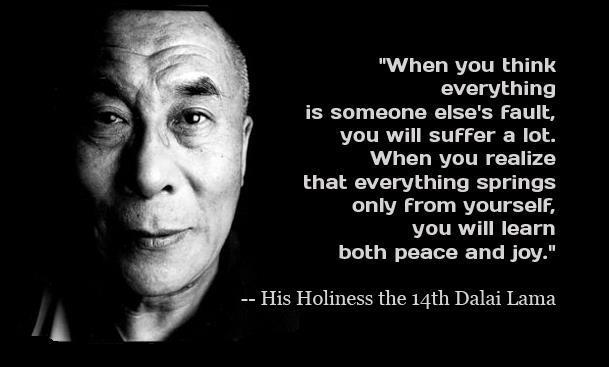 I have nothing else to add.

You are absolutely right. Once you realize you are eternal spirit you break free from this evil world and know that it will get better and that the grass is in fact greener on the other side of the fence.

posted on Jul, 16 2014 @ 02:48 PM
link
Personally I think, there's a way to find a good balance between the spiritual and the so called materialistic world, you spoke of.

Anyway. Nice Post and some pretty good (in)sight of yours .

He who does not expect the unexpected will not find it, since it is trackless and unexplored. - Heraclitus

I'm right there with ya, great stuff.

One thought I might add is that the physical world isn't opposed to the spiritual, its the false structures of mankind, the beast system that is the problem. I say this for some reading, because it is easy to debase your body, or have negative body image without proper differentiation between physical world and the matrix of society. It can lead to what I believe are unhealthy thought processes about yourself.

This is true, and I did a horrible job explaining this difference. Once you are in the spirit, the physical world simply holds no sway over your plight. The physical world just "is", and there is no "sin" within it. Rather, it was our warped perception of it previous to our understanding of the difference.

The story of Adam and Eve in the Bible reflects this perfectly to me. Eve ate of the fruit of knowledge. Before this Adam and Eve ran naked in the Garden of Eden never judging the other of any actions they did. It was a perfect state of affairs, everything was perfect within us. The ability to be oneself without condition without splitting reality into good or bad, we just were. But when we decided to assign right from wrong, we split reality in a sense creating conditions and a false reality that need not exist. The story of Adam and Eve in my opinion was an explanation for how we took a fall, and where we went wrong. Getting back to a perfect state of being requires us to enjoy the physical world while walking in the spiritual aspects of ourselves. Judge not, forgiveness (because everything we do is part of our assent back to a spiritual life), love, all aspects of which every major religion preaches, yet taught in material/physical terms.

Thanks for your contribution.

I agree; you totally "get it".

When a person experiences the flora and fauna of the other sides, that person often realizes it, at the very least, just as important as our corporeally-shared realities.

No matter the path, religion, or philosophy a person holds, that realization almost always leads to a will of altruism and peace. Once you know that your material standing in this universe is only a small part of what makes "life", it's very difficult to keep striving for greedy endeavors and competitive edge. Harmony becomes much more lucrative.