Immigration protesters and activists face off in Arizona

ORACLE, Ariz. -- Protesters carrying "Return to Sender" and "Go home non-Yankees" signs faced off with immigrant rights activists Tuesday in a small Arizona town after a sheriff said a bus filled with Central American children was on its way.

The rallies demonstrated the deep divide of the immigration debate as groups on both sides -- and in similar numbers -- showed up in Oracle to speak out on the issue.

It turned heated at times, with shouting matches and a group of mariachi musicians getting shoved before the skirmishes were quelled. At one point, protesters temporarily blocked off a bus on the road before realizing it was just a school bus carrying children from a YMCA.

The protests came as the government released new numbers that show how many immigrant families and children have been pouring into the country in recent months. The Border Patrol says 55,420 family members have been caught at the border from October through the end of June, a nearly 500 percent increase from the same period in the previous year. The number includes adults apprehended with their young children, and most of them were caught in the Rio Grande Valley in Texas. In addition, the Border Patrol says 57,525 unaccompanied children have been apprehended through the end of June.


I have a feeling that this whole debacle is about to get very nasty nation wide.

Immigration protesters and activists face off in Arizona 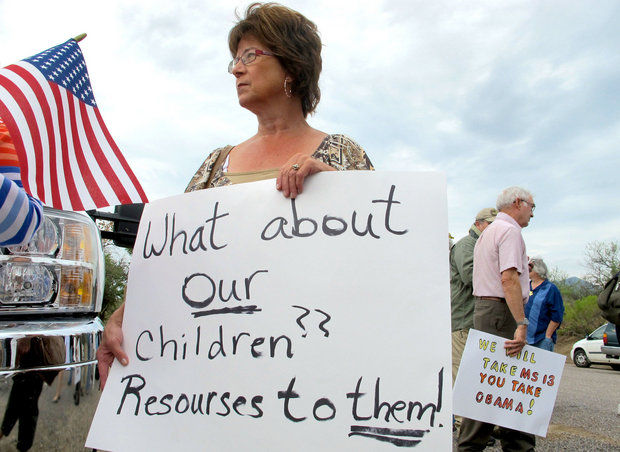 A lot of these folks bring illnesses along with them.

Seriously TB is back in a big way. Polio is a worry too--- in fact most of those things we'd pretty much got a handle do to our healthcare systems and inoculations ... are surging again...

what are you gonna do... there here now and we have to deal with the problem one way or another

posted on Jul, 16 2014 @ 12:36 PM
link
This is rapidly dividing Americans, pro and con immigration. Looks like a very suspiciously convenient "perfect storm" that could very well usher in martial law and the UN.
edit on 16-7-2014 by LrdRedhawk because: Making the grammar nazi's happy

posted on Jul, 16 2014 @ 12:37 PM
link
They need to go...period. They are not citizens. We have people in this country who could use the housing/resources we are giving to people who are not even a US citizen. This whole mess is just wrong. We are the only country that allows this kind of crap to happen. This is not a left/right issue. This is an American issue. If these people can make it here, imagine how many terrorists can make it here. But according to DHS, we have to be groped and scanned because all of the terrorists are trying to board airplanes. Hey DHS, how about moving your operation to a place where it is actually needed!!

It is not. Everybody loves The Children. Everybody wants every child on the planet to be safe and secure. That is not the issue. What this administration and his "behind-the-scenes-agenda-makers" are doing is using these kids as human shields to accomplish a more sinister plot, imo.

Anybody that thinks the Progressives are all about "helping" and "fairness" and "leveling the playing field" ---words they use to pull at the emotional heartstrings --- is sadly mistaken.

Research these non-profits that receive these HUGE government grants and contracts related to inner city programs, urban revitalization initiatives. Poverty is Big Business. Research their Board of Directors and the companies and institutions that they are associated with---especially that. Research the politicians involved with them and see how they are benefiting monetarily. (Think Valerie Jarrett and her housing project involvement.)

I have said it before, and I'll say it again at the risk of being poo-pooed. The Progressive wing of the Democratic Party, if not the Democratic Party itself, absolutely needs poverty-stricken people and crime-ridden neighborhoods to use as excuses to issue billions of dollars worth of grants (translated TAX PAYER $$$$) to feed the companies and organizations that build and service this segment. Think about it. Over the decades hundreds of billions of dollars have gone into these initiatives and programs with little to show for it other than slick websites, lavish charity balls, and people behind the contracts and grants getting wealthy.

Oh, yeah....they do just enough "boxing gym building" and other "after-school-programs" to say they are helping. But, why are these neighborhoods still cesspools of crime and poverty?

The UN and marshal law will never be able to contain the looming civil war in America.

LOL...oops, maybe you should, too. jk

The UN and marshal law will never be able to contain the looming civil war in America.

I think the correct spelling is "martial" law....

Granted. I'm not the one holding a sign in public for the country to see.

What in the world does spelling have to do with this thread?

You were the one that spelled martial wrong lol. Hence why I did without thinking about it. But my point is if you're going to hold a sign in public as the lady pictured spell check it! Nothing wrong with making spelling errors but holding a sign in public makes one think to double and triple check. It just looks silly and affects credibility.


Just prior to the presidential election of 2008, Dr. Stanley Kurtz, Senior Fellow at the Ethics and Public Policy Center, wrote an op-ed published in the Wall Street Journal in which he observed that then-Democrat presidential candidate Sen. Barack Obama’s “most important executive experience” was heading up the Chicago Annenberg Challenge (CAC), an education foundation that was the invention of Bill Ayers, founder of the Weather Underground in the 1960s. Obama led the CAC from 1995 to 1999 and remained on the board until 2001. The foundation funneled more than $100 million into community organizations and radical education activists.

Oh, yeah~~wink wink~~ It's all about the children.

"The Cloward–Piven strategy is a political strategy outlined in 1966 by American sociologists and political activists Richard Cloward and Frances Fox Piven that called for overloading the U.S. public welfare system in order to precipitate a crisis..."