That was easy to google.

I see they are a dot org.

History of Nearby Bottle Hollow

Located near Fort Duchesne, Utah, and about 150 miles from Salt Lake City is Bottle Hollow and the SkinWalker Ranch. In 1970 a reservoir was built and covering about 420 acres making Bottle Hollow one of a kind – a premiere resort built on an Indian reservation.

The motel and convention center at Bottle Hollow was built with federal money to help the Northern Ute Tribe with economic diversity and provide jobs for tribal members. The resort was an attractive oasis in the eastern Utah desert. A sparkling swimming pool was the perfect site for fashion shows in the early 1980s. In the summer, Bottle Hollow Resort was also home to a popular local community dinner theater and numerous high school reunions.The dramatic decline of the oil boom in the Uintah Basin in the late 1980s, also brought the eventual abandonment of the Bottle Hollow Resort by the Ute Tribe.

In the late 1800’s, congress designated seven thousand acres of the Ute land as public domain and inadvertently exempted that acreage from any official control or law enforcement. As a result many salons and brothels sprang up with outlaws, miners and soldiers from Fort Duchesne being among customers that visited.

In the evenings as the soldiers returned to the fort drunken they often passed by a ravine in which they would throw their empty whisky bottles. So many bottles were thrown in that it eventually earned the name Bottle Hollow. Bottle Hollow is now covered mostly by water from the reservoir.

The Utes believe that the lake is inhabited by several large aquatic snakes with the first serpent sightings dating back just after the area was filled as a reservoir. Eyewitness claim that they have seen on occasion things crawling around from the marina all the way down to the end of the reservoir. According to tribal police officers an inordinate number of drowning cases have occurred in the reservoir.

One case of a drowning investigated by police is that of a woman and her male friend that were swimming at night. Witnesses on the beach heard the woman screamed that something in the water had grabbed her and was pulling her under. Her male companion dove under the water and claimed that he encountered a huge, black snake and attempted to free the woman from it. The woman was eventually pulled to the surface but did not survive the ordeal. There are also accounts of strange lights entering and leaving the water. Another report mentions a bluish light exiting the water and then disappearing over the SkinWalker ridge. It does appear that such reports were taken seriously by tribal police.

The SkinWalker ranch is located nearby and seems to have some link to Bottle Hollow. The SkinWalker ranch was a hot spot for paranormal and UFO activity with the local area experiencing cattle mutilations. It is believed by some Ute Indians that a SkinWalker is responsible for all of the bizarre activity that goes on. They believe the SkinWalker to be a shape shifter.The Natural Institute for Discovery Science conducted an in depth investigation of the Gorman ranch (SkinWalker ranch) in the 1990’s.

originally posted by: lovebeck
This is a very interesting doc. I watched it last year.

Quantum physics and ZP energy is a reality. It would make the world a much better place if "they" ever let those who have the smarts develop it for the masses. S&F for posting!


Anyone who has the smarts to do that can do it. Nobody will stop them. Apart from physics, in all probability. Physics doesn't like free lunches.

There are no black helicopters trying to stop the free energy brigade. They have been going for decades and it's obviously lucrative because they are still managing to attract gullible "investors".

If you could create free energy from nothing, you would do it and sell it. You wouldn't spend years doing round after round of venture capital investment.

It is believed by some Ute Indians that a SkinWalker is responsible for all of the bizarre activity that goes on.

In some Native American legends, a skin-walker is a person with the supernatural ability to turn into any animal he or she desires. To be able to transform, legend sometimes requires that the skin-walker wears a pelt of the animal, though this is not always considered necessary.

Similar lore can be found in cultures throughout the world and is often referred to as shapeshifting by anthropologists.

The Natural Institute for Discovery Science conducted an in depth investigation of the Gorman ranch (SkinWalker ranch) in the 1990’s. 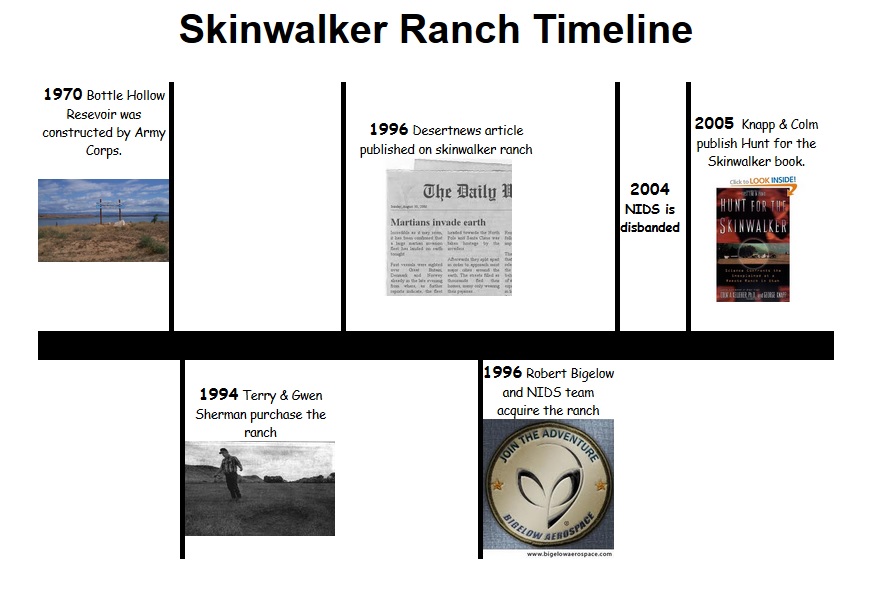 Where does "Gorman" come in?

Old power verse new power, with the old winning over the new. 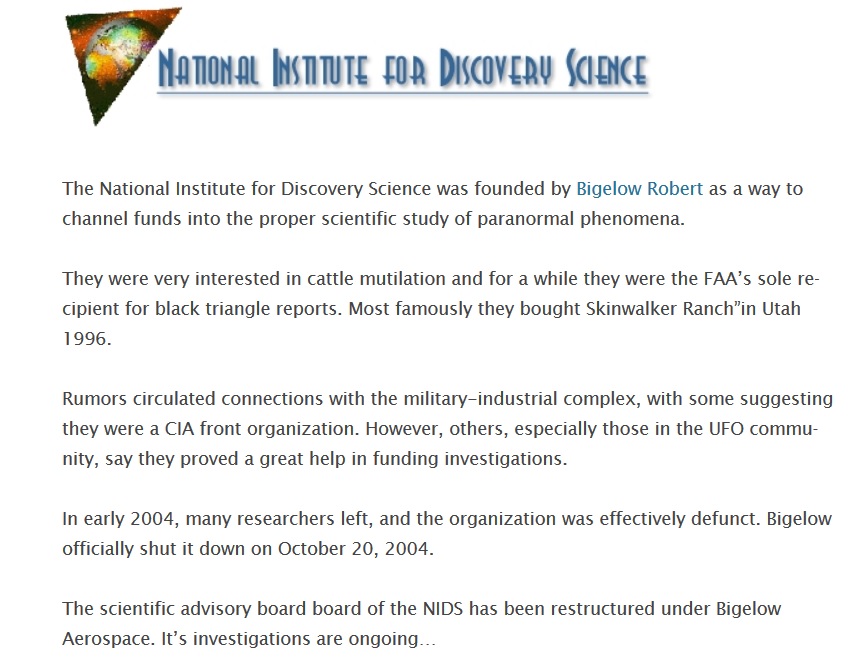 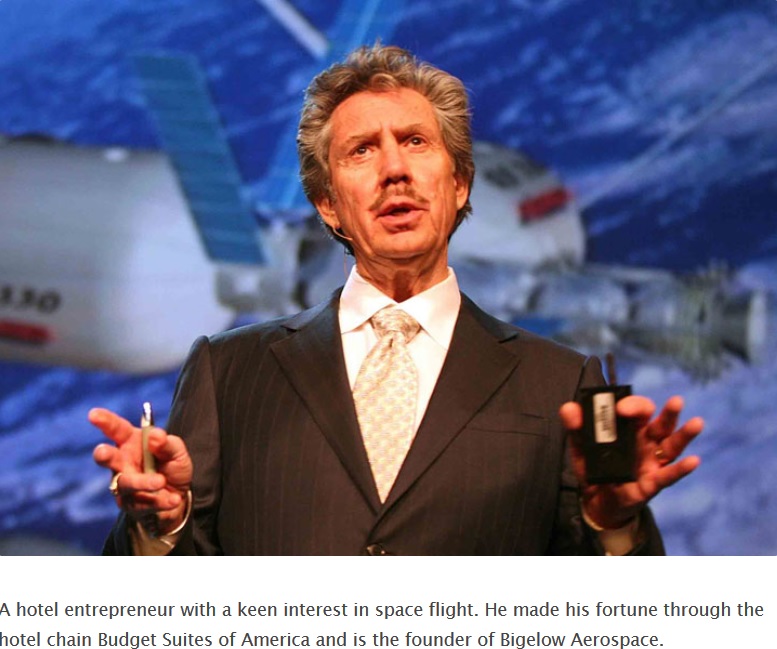 You linked to my OP.

I'm not sure what you mean.

posted on Jul, 17 2014 @ 08:05 AM
link
For the record, anyone who went to scad and "died suspiciously" means they OD'ed and their parents had the reports sealed.

a reply to: Mary Rose

posted on Jul, 17 2014 @ 08:05 AM
link
So, "the scientific advisory board of the NIDS has been restructured under Bigelow Aerospace."

I searched their website but I don't see any info about their scientific advisory board.

They seem to be comparing themselves to NASA:

Unlike NASA's Mission Control Center in Houston, Texas, Bigelow Aerospace's Mission Control consists of a small team of engineers with various backgrounds that are each responsible for the broad operation of all systems on each vehicle. Each controller is responsible for vehicle command and control, data acquisition, vision/imagery operations, ground station operations, and the development and testing of future Bigelow Aerospace modules, among other duties.

From the other thread, the 2 page PDF toxicology report: Link

originally posted by: Mary Rose
a reply to: Xcathdra

You linked to my OP.

I'm not sure what you mean.

in your op you quoted this from signalfire -


his toxicology report indicates that he was poisoned with an odd array of heavy metals including uranium and thorium.

The cause of death was heavy metal poisoning, specifically Uranium and Thorium.

Uranium is used for nuclear energy production. Thorium is the "suppressed" energy technology that could theoretically run a car for 10 years of constant use. It can be used to replace nuclear power plants, specifically uranium, with Thorium, which does not give off the harmful side effects of nuclear uranium power plants.

So we have an individual who is pushing for zero point energy, which could possibly lead to the end of power companies and their monopolies, opening the door for free / extremely cheap energy for all - a position Tesla was also pushing.

His theory was if one could provide the world with equal, cheap / free, energy it could raise the quality of life for all instead of just the countries who had the money to invest in traditional (at the time anyway) energy infrastructure.

anyways, just a person observation. It just seems to be coming across as a warning that the old school group seeking profits will win out over new techs by removing the individuals pushing the new tech.

By any chance, have you done any research or do you have any idea how assassinations (right word?) like that are carried out?

Although I haven't researched all that extensively on where the name of the ranch originates from, it would of course be perfectly logical they adapted the name from the nearby Ute's. I don't believe however there is any connection to the Ute tribe and the ranch itself other than the name. As for the woo woo that seems to go on there, Jacque Vallee was on the NIDS scientific advisory board. And Col. John Alexander the promoter of "non-lethal" warfare and very much into the woo woo..

This is a screenshot:

First, please clarify which post you are actually responding to.

During the roundtable to discuss this video, Mark McCandlish said:

Well, in the beginning, I was convinced that the entire basis of this propulsion system was the Biefeld-Brown Effect, which would be encapsulated in the capacitor array that was on the bottom of the craft.

But as time went on and I began to realize that the central column inside the structure was tapping into this zero point energy that is responsible for mass and inertia, G-forces, and things like that . . .

At that point, Jesse Fritsch starting shaking his head and then commenting to Henrik:

First, do you remember that?

And second, do you have an opinion on what was said?

posted on Jul, 17 2014 @ 01:48 PM
link
Steven Greer and the Disclosure Project? Yeah, more crap from the outer-toilet of the internet/humanity. Nothing but third-party stories, lies, scammers and claims that have been discredited.
edit on 17-7-2014 by LogicalRazor because: (no reason given)

Generally, I agree with you... Greer is a demented, corrupt huckster (IMO) ... however just because he was instrumental in gathering that group , doesn't discount the entire group... classic Baby and Bathwater scenario there...

But it is too bad, as even if he amasses good info, most will discount it ...now.

Those high-priced "wish real hard and contact ET" and the moth = ET pic did him in for me.

ETA and anyone else think McCandlish and Streiber are long lost twins (or the same disinfo agent ...heh)?

. . . classic Baby and Bathwater scenario there...

You are a wise person.

There is also the testimony of the Citizen Hearing on Disclosure (2013). Perhaps check out some videos?

Each witness should be evaluated separately and objectively.

I am of the opinion that we're all morally obligated to put in some time researching this stuff.

ETA and anyone else think McCandlish and Streiber are long lost twins (or the same disinfo agent ...heh)?