It is also the only site where gomphotheres have been found in association with human hunting.

A tip from a rancher in Mexico’s Sonoran Desert has led to an unexpected find: an ancient encampment where members of the Clovis culture hunted an elephant-like animal never before seen in North America’s archaeological record.

More importantly, the camp turned up a host of exquisite stone points and bone ornaments, with organic material dated to 13,400 years ago, making it one of the oldest and southernmost Clovis sites yet found on the continent.


Archaeologists were tipped off in 2007 to unusual bones eroding out of a cut bank some 200 kilometers south of the Arizona border, at a site given the ominous name El Fin del Mundo, or The End of the World.

There they found the remains of two animals that initially proved difficult to identify.


“At first, just based on the size of the bone, we thought maybe it was a bison, because the extinct bison were a little bigger than our modern bison,” said University of Arizona archaeologist Vance Holliday, in a press statement.


After uncovering the distinctive jawbone and teeth of one of the specimens, they realized they had found gomphotheres, odd-looking, long-jawed ancestors of modern elephants once thought to have vanished from North America before humans arrived.


Much older gomphothere specimens had been found elsewhere in North America, Holliday said, and Clovis hunters were known to have stalked their evolutionary cousins, the mammoths and mastodons. But this is the first evidence that humans shared the continent with, and hunted, gomphotheres.


“This is the first archaeological gomphothere found in North America, and it’s the only one known,” Holliday said, before ticking off the many firsts marked by the find.

Evidence of the creatures’ fatal encounter with humans includes four large stone points, all crafted in the characteristic fluted Clovis style, found in situ among the animals’ remains.


Three more points were found within two meters of the animals — including one striking projectile fashioned out of crystal clear quartz — along with stone flakes, two small carved bone ornaments, and burned bones. 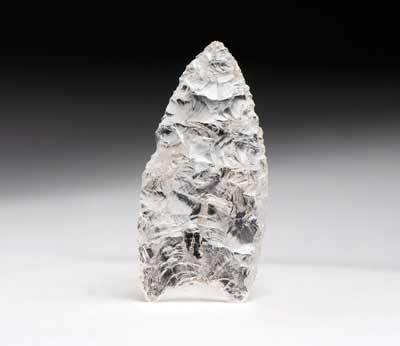 Punkinworks, hey can you provide a link to the Witt site? Or by the Witt site do you mean the Aubrey site found by Benjamin Witt?

posted on Jul, 15 2014 @ 12:57 PM
link
a reply to: HansluneHans,
There is next to nothing on the web about the Fresno county ca Witt site., other than the study of paleo fishes that I linked to in another thread. You really enjoyed that paper, if you need another link to the pdf I'll send.
There have been several digs at the Witt in the last 50 years but none of the literature has made it past the hosting institutions libraries.

posted on Jul, 15 2014 @ 02:37 PM
link
a reply to: Hanslune
Hans,
Here is the link to the ancient fish paper that has some info and dating of the Witt site in California.
At one point I was able to find a preliminary field report of a dig in the early nineties, but lost the bookmark when comp failed, and haven't been able to relocate it

Very cool find - at first thought the Clovis point pictured was a modern glass example but it actually is a prehistoric Quartz blade from the site in question. That is some serious freaking cave-bling. I wonder if any traces of mastic/glues or binding have been found on it as it looks exceptionally clean. Perhaps it was never hafted and served another purpose. Outstanding!

posted on Jul, 15 2014 @ 04:01 PM
link
a reply to: skalla
Hi skalla,
Isnt that quartz piece stunning, I don't know if that item had any binding materials on it, but other points found out here in the west have had a variety of binding materials.
Clovis points found in the califonia coast range have been found with traces of bitumen, and in the great basin a variety of pine saps were used.
One article I've read mentioned that the points with bitumen used no cordage, just tar to hold the point.
After reading Stanford and Bradleys"Across Atlantic Ice", I'm ove the opinion that only the smaller Clovis points were actually spear points and the very large and delicate blades were butchering tools and razors, for shaving hair from the carcass. Hair could be used fir rope or cordage or for insulation.

Quite possibly, i've seen some (amongst many many others) that Tim Rast of Elfshot fame made, hafted and bound in rawhide that were awesome, but i've no idea personally about real finds that indicate whether they were hafted and how.

Of course the fluting lends so easily to hafting in a split/notched shaft and with the retaining pressure this would produce, along with glues that also act as fillers no doubt binding could be regarded as overkill. When retouching edges a binding on a blade is actually a PITA, whereas glue can be melted or prised off, the blade removed and retouched - then the glue re-melted back on and bingo you are ready to go. I've tried retouching blades that are still hafted and it's a pretty impractical process. Pine glue is great in it's re-usability and i believe that Birch tar shares this quality.
It may also be that the flutes simply became a cultural tradition, and while modern knappers take quite some time to perfect the process with various punches and jigs it's surely much simpler when you are raised in the tradition.

posted on Jul, 15 2014 @ 07:04 PM
link
a reply to: skalla
With respect to Clovis and related points, and the fact that there have been several kill sites that produced points that would have been still lodged in the carcass, I belive that some points may not have been fixed at all to the fore shaft. So you wedge a point into a tapered split socket, and the fluting holds it centered. When the point strikes the point stays in the animal.
I've also started think that the beveled bone rods found at Clovis sites are actually spear points.
I've come to this conclusion from a native California myths, in one myth of the first war, the mountain people are fighting the valley people. Eagle is chief of one group and turtle is chief of the other. While the battle rages, eagles stone points shatter on turtles shell. Coyote fashions a point from a leg bone and the bone point pierces the shell.
One thing I have found to be interesting from this story, is that at the Gault site , turtle was the preferred food.


Isn't it, though? And I'm told that quartz is just such a pig to work. I found 3/4 of a point on a late woodland site a while back, and even that was a thing of beauty.

posted on Jul, 15 2014 @ 11:17 PM
link
a reply to: JohnnyCanuck
Hey johnnyc,
The use of difficult yet attractive materials seems to be a hallmark of Clovis and solutrean cultures, On a side note an aquaintence found several calcite arrow heads in Utah that were spectacular examples of stone work

I've not seen the bone rods - i dont know much at all about Archaeology in the New World, but i've made quite a few bone items myself, needles, chisels, various points and blades and they are scary sharp point-wise. I'm getting a pretty comprehensive tool kit together (slowly) and have bevelled bone pieces for use as splitting wedges for bow making and they work a treat.

I've not seen the bone rods - i dont know much at all about Archaeology in the New World, but i've made quite a few bone items myself, needles, chisels, various points and blades and they are scary sharp point-wise. I'm getting a pretty comprehensive tool kit together (slowly) and have bevelled bone pieces for use as splitting wedges for bow making and they work a treat.


Skalla,
I found a nifty little article on Clovis bone and ivory tools.


Bone and ivory artifacts that have one beveled end and one pointed end have been found in kill sites, in direct association with the front limb of a mammoth at Blackwater Draw, and in campsites. Tip breaks on some of these also suggest that they were used as projectile points. Bone projectile points with demonstrated manufacture technology have also been recovered from the following time period, after the extinction of mammoth, (Frison and Craig 1982: 162-165). Some of these have distinctive breaks, interpreted as resulting from impact (Figure 9a). Even though these are associated with a bison kill/campsite, it is believed that they would not have been effective for killing bison (Frison and Zeimens 1980: 231-237).