Mary Anne Grady-Flores, a 58 year-old woman from Ithaca, NY was sentenced to one year in jail on July 10th after violating an Order of Protection issued after her participation in multiple anti-drone protests at Hancock Air Base in DeWitt, NY. In addition to her one year jail sentence, Mrs. Grady-Flores was fined $1000, a $205 court surcharge and a $50 fee to have her DNA collected.

Mrs. Grady-Flores first ran afoul of the law in October of 2012, when eleven members of the group, Upstate Coalition to Ground the Drones and End the Wars (UCGDEW) were arrested by Onondaga County Sheriff's deputies for trespassing and disorderly conduct after they blocked the entrances to the base with traffic cones and signs. 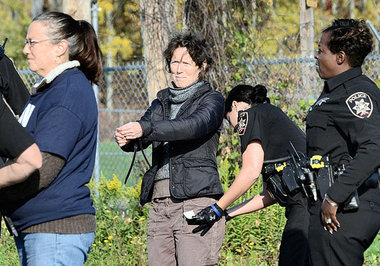 After the protesters blocking the gates were arrested and loaded into a black van, other peaceful protesters, holding signs on the side of the road, left the area after they were ordered to disperse under threat of arrest. 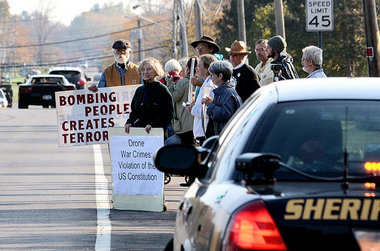 Following her arrest, a protection order was issued which forbid Mrs. Grady-Flores from going near Col. Earl Evans, mission support commander of operations for the 174th Attack Wing of the NY Air National Guard which flies General Atomics MQ-9 Reapers in missions over Afghanistan.

Ironically, in this second incident, Mrs. Grady-Flores was present to videotape the protests and according to her sister, Ellen Grady, was unaware that in doing so, she was still in violation of the protection order.

The following excerpts are from Popular Resistance (their italics, my bold):

Mary Anne began her sentencing statement with, “Your honor, a series of judicial perversions brings me here before you tonight.” She concluded that the “final perversion is the reversal of who is the real victim here: the commander of a military base whose drones kill innocent people halfway around the world, or those innocent people themselves who are the real ones in need of protection from the terror of US drone attacks?”


Even though the pre-sentencing report recommended no jail time, Judge Gideon sentenced Mary Anne to the maximum of a year in prison. As he imposed his sentence, the judge referred to his previous Hancock decision. He had stated then and insinuated now, “This has got to stop.”

A year in jail for violating a BS "protection order" issued to stop citizens from conducting nonviolent protests against the drone program? I find this to be deeply disturbing and completely unacceptable. How long did it take for laws to be passed so that similar orders could be issued to protect real victims of domestic abuse and stalking and now it's being used to silence peaceful demonstrations?

Regardless of your views on the drone program, this travesty should be of great concern to everyone.

The Popular Resistance source includes information for contacting local groups and Mary Ann's sister, Ellen Grady, should anyone want to inquire about how to help.

Popular Resistance
Syracuse Post-Standard
Boing Boing
Ars Technica
edit on 2014-7-13 by theantediluvian because: (no reason given)

posted on Jul, 13 2014 @ 06:03 PM
link
It appears she (and the others by proxy) accomplished what they meant to do: draw attention to themselves/cause. Some would view getting arrested for protesting as a badge of honor...
edit on 13-7-2014 by LadySkadi because: (no reason given)

originally posted by: theantediluvian
A year in jail for violating a BS "protection order" issued to stop citizens from conducting nonviolent protests against the drone program? I find this to be deeply disturbing and completely unacceptable. How long did it take for laws to be passed so that similar orders could be issued to protect real victims of domestic abuse and stalking and now it's being used to silence peaceful demonstrations?

The problem with that is you can't cherry pick when to enforce a law like ignoring a protective order.
Right or wrong one was legally put in place against her so she should have respected it.

posted on Jul, 13 2014 @ 06:18 PM
link
Blocking access to anything on a "lesser" protest is not the way to go.
But in any protest, governments should be careful with how they handle their detentions and crowd control. Protests are about momentum, and when unfair detentions and excessive use of force are applied, the demonstrations gain momentum and the protest motives becomes those two factors. This is when things escalate.

originally posted by: loam
Maybe if it had just stopped with the signs, the arrests might not have happened.

But a year in jail? A YEAR?

I have several issues here. The first being that the judge used an Order of Protection to keep her away. Protection from what? This doesn't seem to comport with the purpose of this type of order AT ALL. Secondly, to make an example of this woman, the judge gave her the maximum sentence despite a pre-trial recommendation (I assume by the prosecutor) for no jail. Lastly, by convicting her of a Penal Law misdemeanor, they charged her $50 to harvest and catalog her DNA. This is a problem I have with NY in particular since it's the first state to enact an "all-crimes DNA" law.


These most recent incidents were not the only times Grady-Flores was involved in anti-drone protests in central New York. In 2011, she was part of the "Hancock 38," a group which was apprehended for protests at the air force base. According to Democracy Now (hearing transcript), those protests concerned the MQ-9 Reaper drones being flown remotely over Afghanistan from Syracuse since late 2009. The video below shows Grady-Flores making reference to that experience while testifying in DeWitt earlier this year in regards to the October 2012 incident.
Grandma repeatedly protested drones at base, now faces a year in jail


and apparently they have been going to the Commanders house and protesting that's why the order was given.

now i'm no lawyer, but my understanding of Orders of Protection / restraining orders, say that you are not to go within so many feet of said person no matter where he is. i don't buy that she didn't know that. i also think that to be repeat offender she got off easy.

posted on Jul, 13 2014 @ 07:13 PM
link
a reply to: theantediluvian
I don't know how people protesting abortion get away with all that they do to women, trespassing on hospital property with picket signs, blocking entrances to clinics and setting up the trucks with the graphic depictions of fetus in the garbage, and their rights are protected? This woman does the same to protest something she believes is wrong ,and all of a sudden freedom of speech is not a protected right any longer? Kind of a double standard isn't it? Didn't the Supreme Court just go over this?
edit on 13-7-2014 by Loveaduck because: (no reason given)


well it seems this was the third time she was arrested.
she was also arrested in 2011 according to this article.

I missed that when I was putting together the OP. Here's a link.

List of names of the arrested adapted by Ed Kinane from the april 23, 2011
Syracuse Post-Standard, p. A-7 and according to the Onondaga County Sheriff's office:

If I see any group of people with as much accumulated life experience as these folks, taking to the streets to be heard, I'm definitely going to listen to what they have to say.

and apparently they have been going to the Commanders house and protesting that's why the order was given.

Actually, no I think the driveway bit was quoted as a snide reference to the entrance to the base ("his driveway").
edit on 2014-7-13 by theantediluvian because: (no reason given)


On another note it's sorta refreshing to see older generations protesting against something that they rightly belive is wrong.

yes you are correct, Col. Evans requested the order and the judge granted it.

also there seems to be another reason why she got a year.

A pre-sentence investigation report conducted by the Onondaga County Probation Department suggested Grady-Flores' sentence be a conditional discharge, a suggestion that Gideon stated to be "devoid of any appropriate substance which to intelligently base its conclusion," noting that Grady-Flores has twice refused to pay fines and surcharges imposed by the court. Noting that he saw incarceration as the only option to send a message, Gideon said a conditional discharge or probation would only allow Grady-Flores to "thumb her nose at the law once again."
Hancock Air Base drone protester sentenced to 1 year in jail

and here in this link is the request and the order.
174th Attack Wing has order of protection from anti-drone peace activists

scroll down to the bottom and the request and order are there.
if you read the notice, it plainly states that 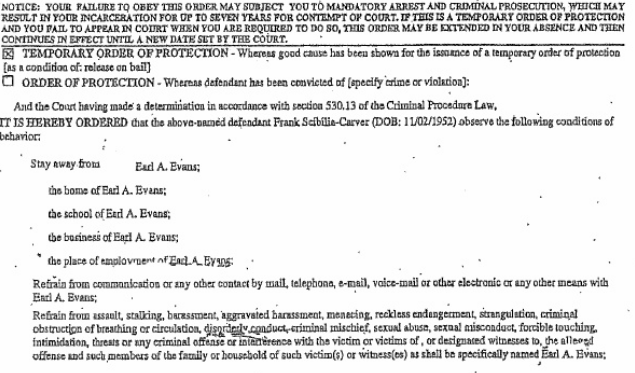 as i said she can't say she didn't know, and that refusing to pay fines will land you in jail.

My ex got a two year PFA order against me for less...
It's the money.

You cant fight the courts when they all play golf and swirl cocktails together after hours...

I hope they brought a couple of MRAPS for this bunch. Bean bag bullets and tazers just to be sure. How do handle a 91 year old without breaking something and incurring a law suit?

posted on Jul, 14 2014 @ 11:25 AM
link
Drastic US Policy calls for drastic protest. These types of protest deliberately break the law to gain attention to a cause. A year is harsh and I morally support her and this cause, she knew what was going to happen good on her for doing it anyway.