Barraco Barner and the Idiocracy 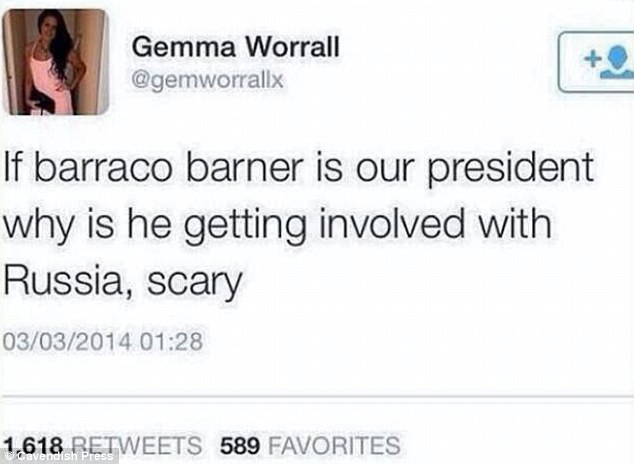 First of all, lady, his name is Barack Obama, not Barraco Barner. Secondly, he is not the head of the UK, David Cameron is. Thirdly, why is it "scary" to you that he might be speaking to Russia?

To me this little tweet speaks volumes about the state of education and state of mind of our world. There is always one level of ignorance lower to trump what you thought was ignorant.

How do people get this oblivious to the world around them? I don't believe it happens by birth. Could it be engineered? An actual conspiracy of deliberate dumbing-down of educational and intelligence standards? Dumbing down is found across all sexes, races, classes. And you wonder: Why? How? What happened here? Who is in charge of our education and what are they doing?

edit on 2014 by Skyfloating because: (no reason given)

Stop the planet, I wanna get off!
I came to the conclusion a long time ago that this is social engineering on a grand scale, to deliberately dumb down the population as far as possible. Pulp TV, the cult of "celebrity", endless trashy "reality" TV shows with plastic people (more Celebs in the making), it's endless, and all brought to us by the same Media companies that operate both the TV channels and "News" channels. People sit and watch this crap and the marketing people urge them on at every opportunity.
Of course, it also makes it easier for manipulation of the masses when it comes to propaganda. It seems the government (many of them in fact) want us to lap up everything they, or the controlled mass media say, and look only at what we are being fed by them. No context, no historical background, just the here and now, and their bias applied, in order to build the desired response.

Nevertheless, you'd think people would be a little more savvy, but I guess if your life revolves around meaningless trash on the TV and media, then the brain suffers from lack of real stimulation and critical thinking.

I'm pretty sure idiocy is as old as the hills. Unfortunately now it can be shared globally by social media. The village idiot can be heard from far, far away.

In terms of education, well I think getting rid of apprenticeships has been detrimental. Instead everyone is encouraged to stay on at school, when maybe they would be better placed learning - and being really good at -a decent trade.

Is it a conspiracy? Hmm. I would need to see some evidence that dumbing down was really happening, before I could attempt to answer that. It's maybe a case of 'empty vessels make the most noise' - those with the least to say seem to like inane platforms like Twitter.

posted on Jun, 6 2014 @ 05:37 AM
link
It's early, I just remembered today's date and the profound significance of June 6th to America, Europe and the entire free world.

posted on Jun, 6 2014 @ 05:38 AM
link
tbh she is still kinda an idiot but the Barraco Barner is what auto correct does if you try to type his name in (not sure if this just uk or if it would work worldwild) it was in our paper about it the phone company checking the auto correct after this went viral

originally posted by: Honkwoo1486
tbh she is still kinda an idiot but the Barraco Barner is what auto correct does if you try to type his name in

I tried and it doesn't give me that. If anything it might give you the first name. I don't know. Either way, its amazing.

The fact of ignorance is one thing, but everyone having to add their views to a situation without any knowledge of it is what really gets me. The Internet has turned anyone into a journalist.

originally posted by: Leonidas
It's early, I just remembered today's date and the profound significance of June 6th to America, Europe and the entire free world.

The lady in the OP...what would her stance on WWII be?

posted on Jun, 6 2014 @ 09:28 AM
link
I was also amazed at how many people who had never heard of a place called Ukraine a few years ago, suddenly became experts on the country in the last months.

posted on Jun, 6 2014 @ 09:46 AM
link
Excellent example of why I don't ever use social media like that. Educated, intelligent great ideas don't go viral and gain such attention nearly as quickly as someone's dumb tweet. What's worse, is a reporter actually went out to her house and interviewed her and her family and made this an actual news story.

There have always been dumb people. It's just that cyber space makes it ridiculously easy for them to let the world know just how dumb they are.

Know those thoughts you have in your head in the middle of the night? Yeah, please stop tweeting them. LOL

posted on Jun, 6 2014 @ 11:28 AM
link
I'm proud to say that I worked on the set of "Idiocracy." The catering was superb. There was some hilarious material that didn't make the final cut because of legal issues.
The stupidity of some people is truly staggering at times.
I'm working in a metal shop. I told a guy to take a six foot piece of material, make two cuts, and give me three 2 foot pieces. He looks at me like I'm stupid and says "How are you going to get three pieces out of two cuts?" He wasn't joking.

originally posted by: CoherentlyConfused
a reporter actually went out to her house and interviewed her and her family and made this an actual news story.

originally posted by: skunkape23
"How are you going to get three pieces out of two cuts?" He wasn't joking.

Being a frequent flyer, I get the stupidest questions from airport staff...in situations where it causes a whole lot of inconvenience.

Once a flight attendant wouldnt let me on an airplane because I couldnt provide my U.S. address (I have a U.S. passport but dont live in the US, something the flight attendant didnt understand). I asked to speak to his superior. His superior apologized to me and actually EXPLAINED to his employee that not all people carrying a US Passport live in the U.S.

Not hard to believe this happened actually.


There have always been dumb people. It's just that cyber space makes it ridiculously easy for them to let the world know just how dumb they are.

The internet has become their showcase and they are often proud of it.