A military aircraft has crashed in the Imperial Valley.

According to MCAS Miramar, which is working to gather information on what happened, the aircraft is a Harrier that was stationed at MCAS Yuma.
MCAS Miramar, 3rdMAW @MCASMiramarCA

A military aircraft has crashed in the Imperial Valley.

Looks like a harrier went down, hit one house and the fire is possibly threatening 2 more.
No word on fatalities yet, and the pilot did eject out.

Bummer that it went into a house, hopefully no one was inside. 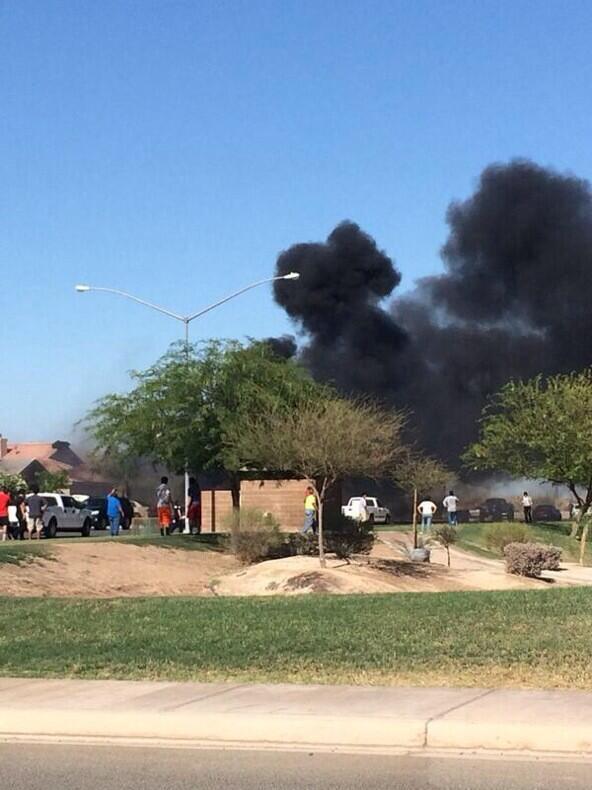 The Harrier has always been a bit of a widowmaker since it was created. It's been doing well lately, but this makes two crashes in the last few months.

Hopefully everyone on the ground is ok.

posted on Jun, 4 2014 @ 08:02 PM
link
Can you imagine one of them coming through your roof? Yikes! I think I'd fear the armament those things carry above all else.

We had an FB-111 go down out of Pease when we were there. It went through an entire apartment building end to end. Fortunately it was an hour or so before the school kids got home.

The chances that it was carrying any ordnance is pretty slim considering where it was flying.


Someone is fixing to get paid ...

posted on Jun, 4 2014 @ 11:44 PM
link
The aircraft was from MCAS Yuma, in Arizona. It's the second Harrier to crash from that base in just under a month. Another aircraft went down near Gila Bend May 9th. The pilot in that crash was able to eject safely as well.

Authorities in this crash are reporting no injuries on the ground. The pilot was taken to the hospital for observation, which is standard in ejections. It puts a lot of trauma on your spine when you eject, and pilots who do usually spend a day or two in the hospital.

I remember those. The one that hit the apartments lost an engine on takeoff and IIRC had problems with the other one.

posted on Jun, 5 2014 @ 12:48 AM
link
It was all over the news. This is life when you live in Hampton roads. You're always in someones flight path. We're surrounded by bases.I live right outside Langley air force base. The jets fly over my house night and day.

The chances that it was carrying any ordnance is pretty slim considering where it was flying.

you have the Chocolate Mountain Aerial Gunnery Range near by so planes can be armed.
www.chocolatemountainrenewal.com...

It's a chance you take anywhere in the US with the amount of air travel overhead. There are thousands of flights a day, counting general aviation, business aviation, and commercial flights. Something like 5,000 flights an hour are going overhead.

I always wondered what happened when that occurs. Do they just leave it? Its not the most advanced aircraft but it has to be carrying sensitive systems that others countries would love to get so as to test their capabilities.

Do they drop mines? Recover it? Leave it?

Has another country ever tried to recover one of our sunk birds? Did they?

It all depends on how deep it is. They'll usually try to recover at least some of it, as part of the accident investigation if they can. Sometimes it's too deep for them to recover any of it.

originally posted by: Zaphod58
About 10pm last night an F-18E attempting to land on the USS Carl Vincent went into the water off the California coast.

I personally think 2 military jets going down in So CA within 24 hours of each other is very odd.

posted on Jun, 6 2014 @ 11:51 AM
link
a reply to: Char-Lee
Harriers are getting old and you will see the number of accidents like this go up. The Brits have retired or sold theirs to the USMC for parts. I'm guessing that Harrier crashes will continue until the USMC gets their F35's. As for the F18, any night carrier operations is hazardous in the best of conditions. God only knows what went wrong and I hope the crew is OK. Just because they ejected doesn't mean they are unhurt.

The popping that is being heard in the video might be tires exploding from the heat.