posted on Jun, 4 2014 @ 05:41 AM
link
Here are some very curious artifacts of bronze age Tepe Sialk in Iran, i try to consider what their purpose might have been and they suggest to me they may have been large battery lamps similar to the Baghdad batteries but on a much larger scale, they suggest lamps to me because of the decorative cut-out pattern seen at the top, rather like pumpkin lamps. 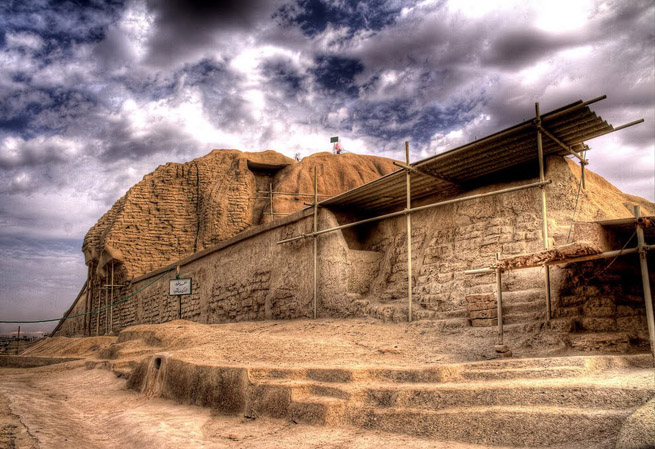 Tepe Sialk is the oldest of the Iranian ziggurat city states that rose contempoary with Sumerian civilization, their distinctive grid pattern design motif carried through to the 1st millenium, the large jars are decorated with this and they could in terms of the faded decoration be from any part of that extensive history. 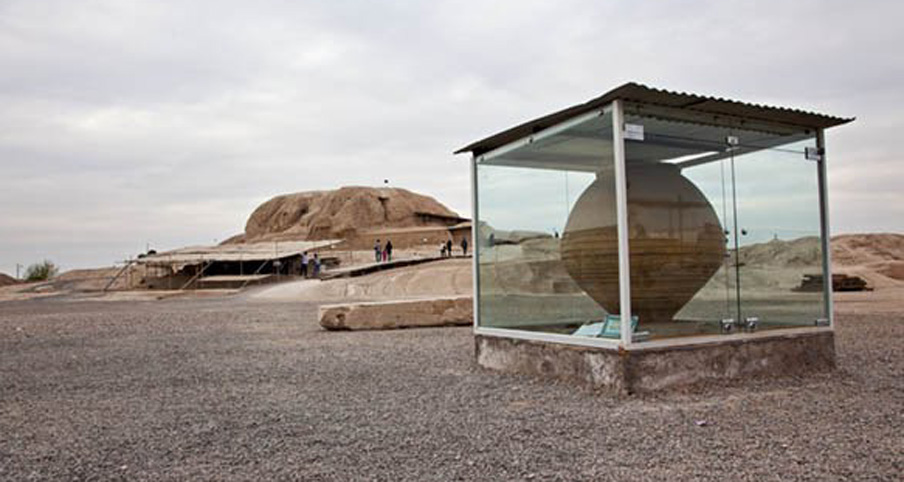 As can be seen they could make very large and impressive storage jars and one sits proudly at the perimeter of the archaeological site, but it is these below which i came across here on an Iranian site without explanation which are interesting me here, looks like they've been found and dumped in some yard. 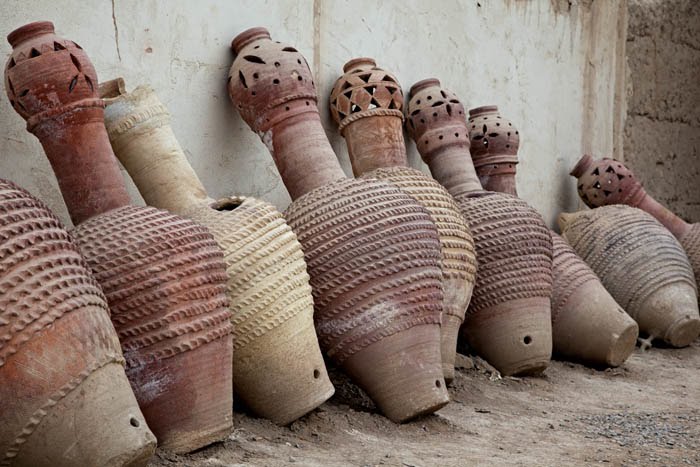 There may be a simple and known explanation for them and it just escapes me, but i was researching the grid patterns of Tepe Sialk anyway as they are a cosmological motif were the surface of the Earth is represented as a grid. 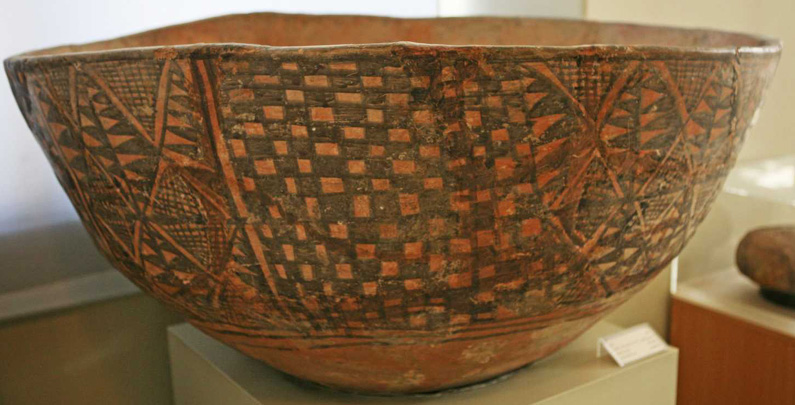 In some examples the context in which the grid is seen is similar to were an architectural portal would be seen in Jiroft motifs also from early Iran, those often with diagonal grid cross hatching. 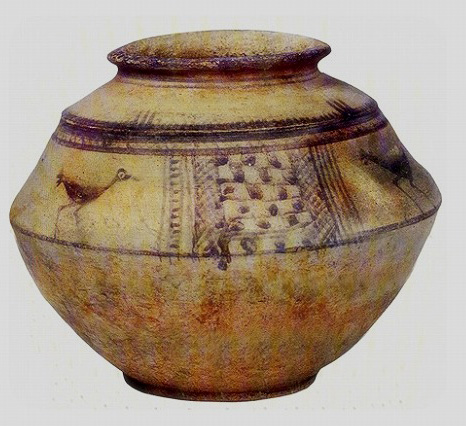 But anyway in and of themselves those large jars are something of a curiousity and well worth looking it, and i'm open to any more sensible explanations for what they were used for other than my own 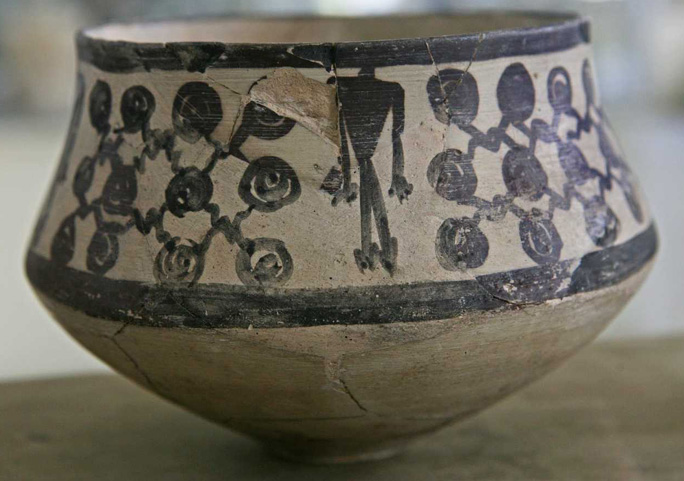 Looking at the picture it's difficult to say if the very top is metallic like the Baghdad battery, hard to see why they would bother with a top there given the cut-outs beneath as it wouldn't help contain anything. 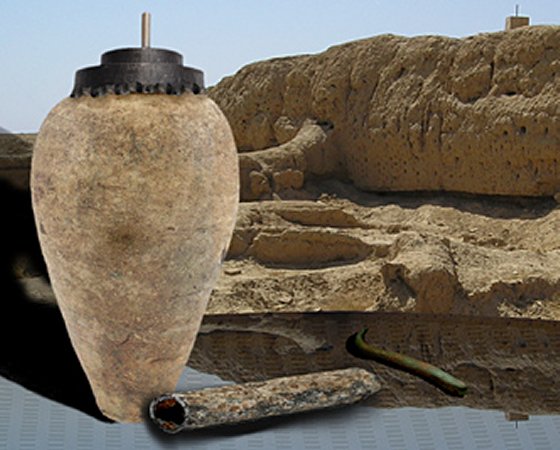 Beautiful pics S&F. The first thing that came to my mind was the jars were used as heaters. The very small hole at the bottom is where the flame is added to the fuel inside. Once the flame is going more fuel can be added by the large hole on the upper side. The top is where the exhaust and smoke will exit one the large hole is plugged.. Without seeing the inside of the jars it would be very hard to tell..

I have seen heaters much like those on a smaller scale in central and South America but the intake hole at the bottom was larger.. Anyway take it for what it is worth


You have any pictures of those...?

I can only see the bung holes at the bottom being for liquid drainage, heat applied through them doesn't seem practical given overall scale.

During the two millennia preceding the advent of the ﬁrst proto-state entities at the end of the fourth millennium b.c., pottery vases were not used merely as containers. By means of the richness of the composite painted decorations, with their geometric or naturalistic themes, the surfaces of the vessels were transformed into a symbolic and representational system. They were projected inside the community as bearers of coded information.


In the many villages on the strips of irrigable soil around the large eastern Iranian deserts between the end of the sixth and the beginning of the fourth millennia b.c. the complex patterns covering almost the entire surface of bowls and jars became an instrument for representing and transmitting an ideological heritage common to very large areas. It is thus to be expected that, despite the size of the areas involved, this transformation helped for a long time to maintain a substantial cultural homogeneity in the production of such ordinary instrumental goods. This dual nature of pottery products was shared by the earliest agrarian societies to be found in the whole of western Asia. With the rise of social stratiﬁcation in the fourth millennium b.c., pottery lost this symbolic and representational function, replaced by more expandable information processors, up to
and including the universal medium of writing. Meanwhile, painted decoration became increasingly cursive and schematic until it ultimately disappeared. Inversely, in the whole of eastern Iran painted decoration persisted

We have something like that in my neck of the woods, called a Chimenea

That was the first impression that sprang to mind when I initially saw the third photo in the op.

Though I'm not certain, as the hole at the bottom is awfully small on the ones in the photo.

Something new to wonder about. Star and flag.
edit on 4-6-2014 by DustbowlDebutante because: Crappy link...grrr...


My mom has one of these but hers is made of some sort of clay or pottery type stuff. I noticed they say in the link I gave that their are made of metal. I have never seen one made of metal here.

I guess the ones in the op could feasibly be have been heaters, although it seems to me they would have been more useful as a heat source if they had a bigger hole on the front bottom like the chimeneas I have seen.
edit on 4-6-2014 by DustbowlDebutante because: Add stuff

Yes that's generally why i was looking at examples of Tepe Sialk ceramics and came across these but i don't think it's referring there specifically to the large jars, examples from museums around the world don't have examples of these as far as i've found, the curious examples look to have been found quite recently seeing as they are simply in some yard.

Drunkeness requires the tap hole at the bottom.

Initial stages of fermentation would normally have been carried out in a large vat with easy access for stirring i would have thought, when wine is then put into storage for further fermenting the container is normally closed occasionally allowing to breath, those jars don't seem suitable for either purpose, but certainly it looks like liquid could be poured in below the level of the neck were possibly damaged stopper holes are seen on a couple of examples, and then drained out through the bottom, but this could of course have also applied to battery acidic.


a reply to: Silcone Synapse


Oil lamps are small scale though, i'm sure there's a reason large oil lamps aren't desirable or people would have made them, one reason perhaps being if something on that scale fell over it would have blown the town up...

I'm sure though they will have been one sort of lamp or another and that their most likely function was being placed on the ziggurat to illuminate it at night, which i've fancied they did for some time due to the Sumerian descriptions.


E-melem-huc (House of terrifying radiance) exuding great awesomeness, Ec-mah (Magnificent shrine), to which princely divine powers were sent from heaven, storehouse of Enlil founded for the primeval divine powers, worthy of nobility, lifting your head in princeship, counsellor of E-kur, pillar of the surroundings, your house ...... the platform with heaven

E-mu-mah (House with a magnificent name), rising mountain of heaven, your holy sides and your great foundation are most precious. Interior full with princely divine powers, a beaming light which shines

The tibetans use yak butter to fuel their lamps even today-most are smallish,but they do have large ones in sort of barrel shaped clay jars which they use outside temples and stuff.The large capacity allows for them to burn all night without being refilled.
Maybe the items in the OP were that size for a similar reason?
But like you said,pretty dangerous if they get knocked over.

Could be not very well designed outside oil lamps, they'd be better i'd have thought with shallow but wide filled storage capacity areas, that way the oil level doesn't go down quickly as in small lamps and they don't get knocked over, but still if found in the storage room of a ziggurat still a major find i'd have thought as they'd have been placed around it and would confirm this aspect from the texts, that they were illuminated by night, would still be cool if they were battery operated


Ok. Maybe they were used as water fountains in gardens.


Sialk, and the entire area around it, is thought to have first originated as a result of the pristine large water sources nearby that still run today. 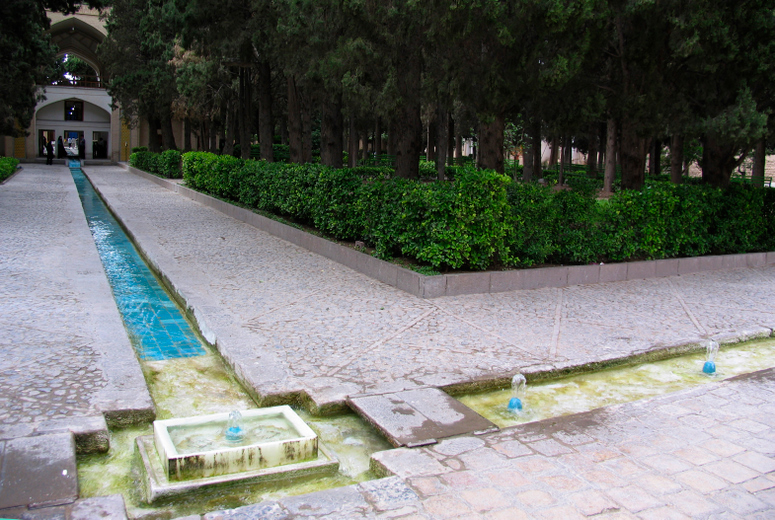 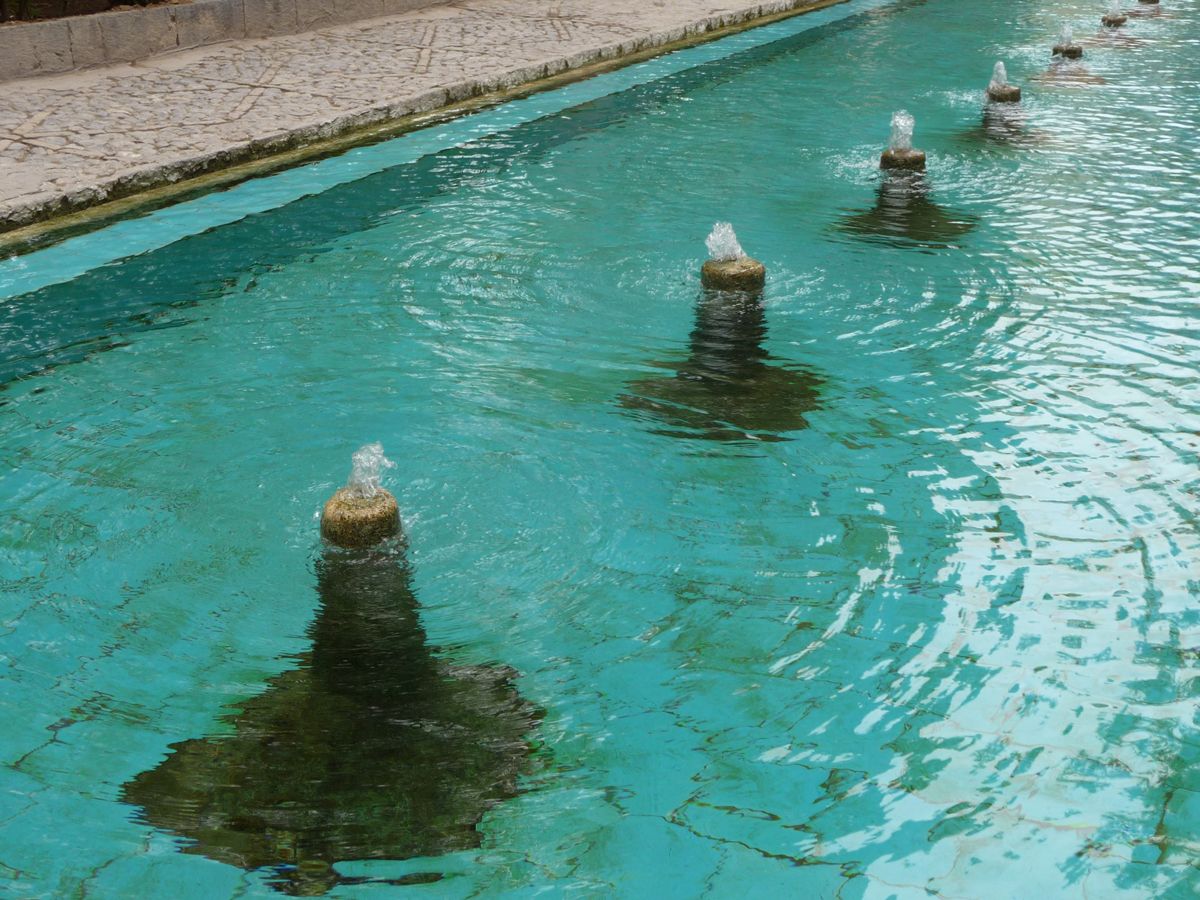 Persian gardens may originate as early as 4000 BCE. Decorated pottery of that time displays the typical cross plan of the Persian garden.

During the reign of the Sassanids (third to seventh century CE), and under the influence of Zoroastrianism, water in art grew increasingly important. This trend manifested itself in garden design, with greater emphasis on fountains and ponds in gardens

It is interesting the relationship between ziggurats, water features and formal gardens from the greater region, the Hanging Gardens of Babylon being the most famous example of course, but most Sumerian cities had complex internal canal systems.


I can't see the jars here as functional water features though, it looks like they've found in connection with the ziggurat and were most likely lamps of some sort placed upon it or around, like in a MMORPG, ignite the lights placed at the four corners of the ziggurat to activate the portal sort of thing

It is interesting the relationship between ziggurats, water features and formal gardens from the greater region, the Hanging Gardens of Babylon being the most famous example of course, but most Sumerian cities had complex internal canal systems.


I can't see the jars here as functional water features though, it looks like they've found in connection with the ziggurat and were most likely lamps of some sort placed upon it or around, like in a MMORPG, ignite the lights placed at the four corners of the ziggurat to activate the portal sort of thing


Interesting premise as the Baghdad batteries have always fascinated me and are to me still unsatisfyingly explained by mainstream archeology.

However...if there are portals.
Still think there is a reason those portals are closed and should remain so. But then I look around and wonder what is going to change this stagnant status quo, so throw open the gates! lol

Without change something inside us sleeps...