posted on Jun, 2 2014 @ 02:02 PM
link
Yes, that's right. Australia did it and they did it with a Volcano. 'It' would be the first mass extinction event, according to Curtin University Researchers....

Fred Jourdan from Curtin's Department of Applied Geology, along with colleagues from several Australian and international institutions, used radioactive dating techniques to precisely measure the age of the eruptions of the Kalkarindji volcanic province -- where lavas covered an area of more than 2 million square kilometres in the Northern Territory and Western Australia.

Dr Jourdan and his team were able to prove the volcanic province occurred at the same time as the Early-Middle Cambrian extinction from 510-511 million years ago -- the first extinction to wipe out complex multicellular life.

"It has been well-documented that this extinction, which eradicated 50 per cent of species, was related to climatic changes and depletion of oxygen in the oceans, but the exact mechanism causing these changes was not known, until now," Dr Jourdan said.

Okay Australia, what did the world ever do to ya? I admit, it would require a time machine even Einstein would cook his noodle imagining to get Pics to prove this one, but it seems to have been a real planetary whammy!

"Not only were we able to demonstrate that the Kalkarindji volcanic province was emplaced at the exact same time as the Cambrian extinction, but were also able to measure a depletion of sulphur dioxide from the province's volcanic rocks -- which indicates sulphur was released into the atmosphere during the eruptions.

"As a modern comparison, when the small volcano Pinatubo erupted in 1991, the resulting discharge of sulphur dioxide decreased the average global temperatures by a few tenths of a degree for a few years following the eruption.

Happy reading and who knows when the next one pops, eh?


Okay Australia, what did the world ever do to ya? I admit, it would require a time machine even Einstein would cook his noodle imagining to get Pics to prove this one, but it seems to have been a real planetary whammy!


We're doing it again only with Bar Be Ques and beer nowadays. Mass extinction but then we wake up next morning and try again.

G, day again I posted the above on what I will in future call the panadol.
yep I am braking in a samsung tablet and panadol is a pain killer.
this infernal machine is both a pain and a killer.
l had to edit the above as I forgot to add a few letters here and there. Would have been ok if I was a kiwi. They dont use the vowels lol have a good day mate. Hmm. After thought. Panadol =pain killer. =slow working dope. Bugga I might jjust fill the bill.
I am goig back to my laptop
oorro mate. Pronto

My Destroyers!!! Leave them out of this conversation. Last one sunk on a lava flow. (Scarpa I think).

Lava Tunnels. Yes the landscape is ancient. The oldest land so I've read inclusive of that "map o' Tassie" place.

G, day cobber. Yep it might have been safer parked in one of those tunnel or on the river torrens Lol
cant rememer the name of the place where those tunnels are.
If u can think of the place maybe give rabbit a headsup so he can look it up
oorro mate

The tunnels are at Undara, and are seriously humungus.

Also, when you look at topographic maps through that area you'll see heaps of extinct volcanoes, there are literally sh!tloads of them.

ETA: The link below is a fairly comprehensive list of Australian Volcanoes and Cinder Cones, except NT & WA. As you'll see there is quite a few.

The river class destroyer "Torrens" is gone. Look up it's demise.

A good example of a small ancient volcano of which you can climb to the top, (Not you Pronto with yer bung toe) is at Pidgeon House Mountain.

The hillside has eroded away leaving the volvanic plug (bung?). Climb ladders to the top for the view. West of Ulladulla.

I like it after looking at the pics. I'm going there. Cheers myselfaswell. I am well too.

G, day mate. To say I am gobbed smacked would be an understatement.
SO many so very many and so large. The one at rocky 3000k size.
ques would that make it larger than the yellowstone in the US
I am trying to use this bloody panadol again. Glutton for punishment.
thanks for the info, really interesting
pronto

G, day Bally mate. Negative. Its called survival training, you get to piggyback me to the top.
I say again piggyback not bloody firemans carry lol:cheers
PS TO RABBIT im off to do some rabbit shootig/trapping tomorrow you like to tag along mate

Easy to tag along RAB. He's limpin. Don't walk in front either. He's got a ferret with only one eye but its deadly to bunnies.

Too easy mate. Well worth the trip. There are other volcanic things to look at on the way there. Lake Barrine & Lake Eacham spring to mind.

Also you have Innot Hot Springs, not really that far from Undara.

Mmmmmm nice and warm in winter

Fairdinkum the list goes on, Check out the Cillagoe Caves

Spot on mate. Why go anywhere else in the world when you have these places to visit. Great pics. Pidgeon House Mountain - South Coast NSW. Pretty place.
Bally 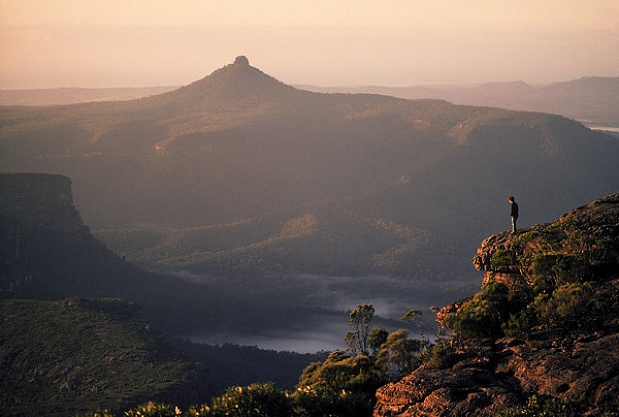 Sorry, forgot to add the pic. Nice place in Australia. Walked all round it and the top a couple of times. Great fishing and camping.

Would lava flow tunnels stay intact for over 500 Million years?

Could mean there have been a series of mega eruptions in that area over the course of history that caused these tunnels to form after this Cambrian biggie.

Sorry MrX. Dunno the answer to that. I've never seen them let alone understand their age. I'm more south. Perhaps ask whoever mentioned them in the topic. I just like the countryside. I know its quite ancient with a myriad of surprises.