Crikey! I got Married..

page: 1
33
<<   2 >>
log in
join
share:
skalla
+15 more
posted on Jun, 2 2014 @ 05:16 AM
link
It felt somewhat self indulgent to post this at first, but considering some of the threads i read in this forum from time to time, perhaps this can provide some encouragement to others who, like me never thought of marriage/commitment as a sensible thing to do, or indeed a realistic option...

Last week i was lucky enough to marry a totally awesome woman who to be fair must be a little cracked in the head as i'm bloody hard work at times to say the least.

It's something that for a few years we really never thought would happen - we live some distance (an hour and a half or so via car) from one another; i have a son (living just over half the time with his Mother, local to me) whose locale i would never move away from; she has a great job that she adores (even further from my home) that i would never seek to discourage her from and these seemed to block us from ever living together.

So of course, we could not bring our lives any closer together, and would be destined only to see each other alternate weekends and whatever other time we could shoe-horn into our schedules, sniff.

But we eventually decided that the above was a load of stinky bollocks and who needs to use everyone else's template for loving bliss anyway? It's about ourselves, and our love and commitment, nuts to what society holds as the norm.

So rather than wait forever for the winds to change and for the time to be "right" (whatever that means)....


We eloped to St Lucia (thanks to the mother in law) and only took immediate family with us... in fact the whole thing was a total secret outside of this group (bar one confidante each) to avoid all the politics of where, when, who and why that goes with the whole organising of such an event and i'm flumping delighted that we made that choice. We live some fair distance apart and also have friends and family spread all over the place so the logistics, politics (and costs for some potential guests) would have been considerable.. instead they got a nice surprise and an invite to one of a few post wedding parties in their neck of the woods. Total organising time came to a handful of hours, praise be to the gods!

So a pic of the happy couple: 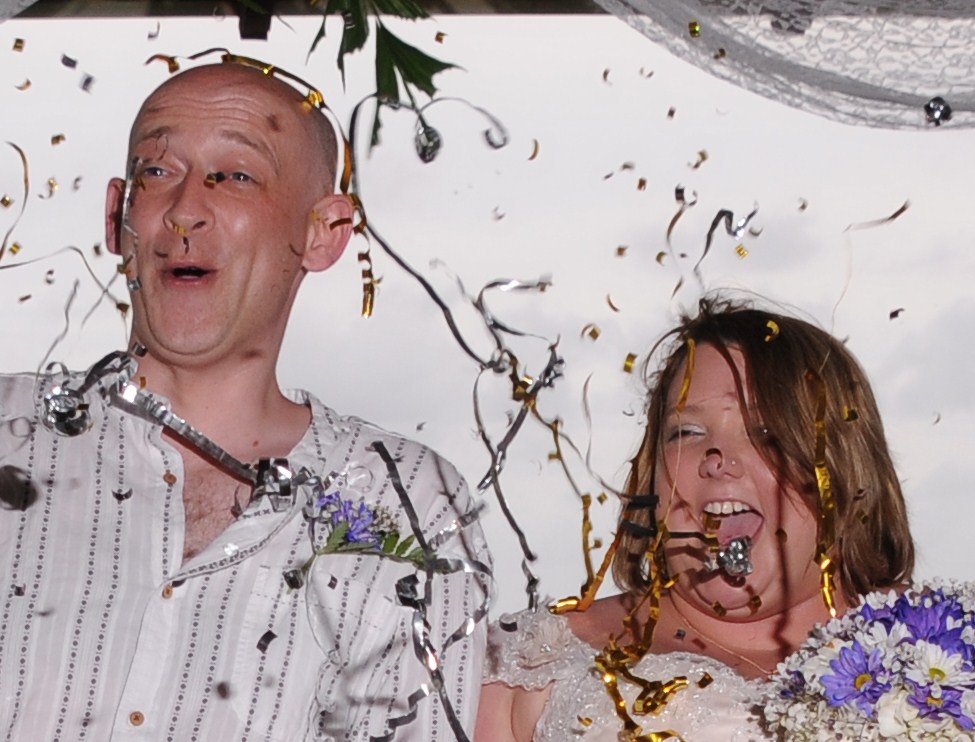 We also met on the internet, shock horror.

I'd never really considered marriage before (i'm 41 btw), and saw it as totally unnecessary as an enlightened citizen of outer space and so forth, but i came to realise that this was rather selfish of me, as my honey came to desire a ceremony of commitment more and more. How could i deny her this? After all, i want her for keeps too.

So, the moral of the story? Don't wait around, or be concerned about how others do things - seize the day and do it your own way (and that means both of you)

You should never have to worry about what is right for other people. It's what is right for you two that matter, and I am glad you both realized it. Besides... With the divorce rate being what it is, not a whole lot of folks have the right to go around and give other folks advice on what they should do to be happily married.

What works for one married couple doesn't necessarily work for every married couple. Marriages are as varied as the people who partake in them IMO.

You both look extremely happy and I am happy for the both of you even if I don't know you. Happiness is hard to find these days and one must grab it when/where they can.

That's what you did and I hope you have many years together being happily married in your own way.

Congratulations!!! You look so happy........such a beautiful couple!!

Marriage is hard work, but worth it when you really love each other.

May your bliss last forever! ♥

Congrats mate, all my best wishes to the both of you. With luck I'll be right behind you as soon as I can expat from here.

Way to go you two

May the gods bless your union forever and a day


But we eventually decided that the above was a load of stinky bollocks and who needs to use everyone else's template for loving bliss anyway? It's about ourselves, and our love and commitment, nuts to what society holds as the norm. - See more at: www.abovetopsecret.com...

Mrs C and got married with us and our best mates as witnesses, their girls were the brides maids and that was it. 6 in total and a registrar. We had such a laugh during the ceremony most unconventional, and one of the best days in my life.

May your marriage be as blessed as ours and then some more if it is possible.

A kiss for the lovely bride

Congratulations !! Wishing you and Mrs Skalla the very best for the years to come !!!!

May your future together be filled with endless days of happiness.

posted on Jun, 2 2014 @ 06:55 AM
link
At Roo...I did everything possible to save my marriage. She was done. She couldn't be honest and just wanted a platonic roommate and au pair. I tried to get her to counseling, I'm not saying I am perfect, but you're right that each relationship is unique. Great advice.

To the Lucky Couple...may your years be filled with Happiness and the Infinite Love which permeates this Universe!

I met my girlfriend on an online dating site...my free trial had expired and I saw her profile and just KNEW it was meant to be. So I paid the $20 so I could reply and we've been living together over a year (been together a year and a half) and the Love grows stronger by the day. I've never experienced something like this. And no, we are not legally ever going to marry. We both did once. That was enough. We are going to have our own private ceremony in a year or so to pledge to each other our Infinite Love.

Seriously, all the best...Love is something more people need in their Lives...

posted on Jun, 2 2014 @ 08:12 AM
link
Many thanks for the kind wishes everyone! I shall convey them to the bride, along with kisses etc

a reply to: the owlbear

I get what you say about the private ceremony, we did a very similar thing about a year ago and i hand made some rings for the occasion, which while not strictly engagement rings, we do wear as such; though perhaps "promise ring" or "love ring" is a more accurate term.
It's funny really though, she's pretty darn unconventional in most ways, but ended up wearing a trad wedding dress, something borrowed, something blue etc etc - and i was completely shocked to see her in a white dress on the big day. It was perfect for us, and i send my own best wishes for your special moment of ritual

Thank you! We are having friends custom make a couple of pieces. I dont wear rings and actually lost my wedding band within 3 months of my last marriage. We thought the dog ate it and had him X-rayed

Now, we're saving up for a trip somewhere fitting of the moment. And renewing our passports.

Congratulations to you both! You both look so happy!
Life's too short to worry about what 'should' happen - good for you!! You're right, it is all a load of bollocks - grab the moment and enjoy life.

My husband and I lived 5 hours apart for a year and a half, seeing each other once or twice a month. It was hard, but really made us strong. I wish you all the best!

G, day mate. Cograts and the best of british luck to you and the missus
old aussie saying . Man is incomplete without a mate and once he has foud her he, s buggered lol
and a cheesey grin

May your married bliss bless you with many an early morning fart and an occasional grunt from time to time.

Congratulations to both of you.

Now you are married.

Your wife may not always be right but she's never wrong. Learn this one quick.

Wives need water, food and compliments. In that order. Failure to provide in all 3 may make her grumpy.

Thank you, this one needs shoes too.

Luckily i like a good long walk and can slip into my own dreamland at will, so i easily outlast her on our (ok, her) occasional shopping trips in the most casual manner. When this is combined with strategic " yes darling"s and "you look awesome smooch" at the correct moments, all is good.

I'm still planning on being a total pain in the bum as always though, i have a reputation to uphold. I like to think that it's part of my charm but i guess that time will tell.