Americans in general have a less-than-stellar image of "big business," with just 22% in previous polls saying they have "a great deal" or "quite a lot" of confidence in big business. This is one of the lowest confidence ratings of any of the institutions Gallup has tested. Americans' poor ratings of the effectiveness of large U.S. companies in creating U.S. jobs could be one of the underlying reasons for this overall negative image.

Americans do seem to recognize that large U.S. companies contribute in some areas. Americans are most positive about large companies' ability to create important new products and technologies. But the other two areas in which the majority of Americans give large companies "good" ratings both have to do with their contributions overseas: creating jobs for citizens of other countries and creating better lives for people in communities outside the U.S. where U.S. companies do business. These are the only three issues of the eight tested on which more than half of Americans rate the job that large U.S. companies are doing as "good."

With low wages and the continued export of American jobs is no wonder a huge majority of Americans see big business supporting jobs and economic growth anywhere but the USA. The same business have bought the American political system, and are doing what ever they can to further there unethical maximum profit schemes.

Its easy to see that tax breaks for the rich from Nixon, Reagan, and Bush have ultimately lead to deficit spending, while the right will blame it on social or entitlement programs. But economic stagnation with the poorer classes insure the need for so called entitlement programs and most of these programs are geared towards big business with tax brakes or subsidies for employees.

The people are seeing threw the charade of the propaganda preached by bid business. The benefit from tax breaks yet the supposed trickle down economics are not believed by the American public.
edit on 29-5-2014 by LDragonFire because: (no reason given)

posted on May, 29 2014 @ 12:40 AM
link
More like exploiting as the workers often put in 18-20 hour days seven days a week for the equivalent of u.s $200.00 per month .. are housed in overcrowded .. inadequet rooms with poor bathroom facilities .. limited cooking facilities .. no healthcare .. all so the company can make its quota of useless things people dont need that are sold at overinflated prices in western countries ..

Its easy to see that tax breaks for the rich from Nixon, Reagan, and Bush have ultimately lead to deficit spending, while the right will blame it on social or entitlement programs. But economic stagnation with the poorer classes insure the need for so called entitlement programs and most of these programs are geared towards big business with tax brakes or subsidies for employees.

Seems to me your pom poms are blinding you from seeing him just carrying on pretty much the same ole agenda as the evil right wingers you are so vocal hating on!

Wake the hell up!

Do you not realize YET that by supporting ONE party over the other that you are actually supporting BOTH??????

I no longer support any party. Obama didn't cut taxes for the rich they just extended the Bush tax cuts and congress along with Obama made some of bush tax cuts permanent. Obviously elitist policies that hurt America .

The positive aspect of this poll (from my POV) is that 60% of Americans realize now that "small is better than big".
That is a new development, right?

Now all you have to do is demand the same reduced corporate tax rates for the honest small and middle class businesses, instead of solely for huge corporations that obviously know no responsibilities.
edit on 29-5-2014 by ColCurious because: (no reason given)

originally posted by: LDragonFire
a reply to: seeker1963

I no longer support any party. Obama didn't cut taxes for the rich they just extended the Bush tax cuts and congress along with Obama made some of bush tax cuts permanent. Obviously elitist policies that hurt America .

I gave you a star for at least attempting to be honest......

Thus my question. "Why do you always support Obama and his policies then?".

I get it you don't like the Right, but why support the current corrupt regime? Aren't they all the same?

Anyone whom supports our current corrupt system, and continues to show up and vote for them, as far as I am concerned, deserves every bad thing that is thrown upon them for believing in criminals to make their lives better........

originally posted by: xuenchen
The amazing part is the 43% that said "Good" to:

posted on May, 29 2014 @ 07:05 AM
link
Help/economic enslavement and taking advantage. Strange how different an behavior can be defined. For those who think corporations are holy they can do no wrong and are divine. For those who see them as en-slavers and destroyers of humankind and nature they can probably do no good.

How would raising taxes on business (a punitive action) create an incentive for business to stay in America and create more jobs?

How does Obamacare (which forces business to pay into the government-run healthcare system) create an incentive for business to stay in America?


The way I see it, the government is creating program after program to push business away from American shores. Business is in business to make money. To make profit.

If there is no profit (for investors or shareholders) then there is no incentive for business.

Now I'm just a very simple man, who likes to think he's a bunny. (or I'm actually a bunny who thinks he's a man)

Either way, I don't understand.

Perhaps yourself or someone else can kindly explain it to me.

It's all a question of swings and roundabouts.

Brritish, German Japanese etc companies invest and manufacture in the U.S. thus creating jobs for U.S. citizens.
Britain is the largest overseas investor into the U.S. and this invest alone creates jobs for 1 million plus Americans.

posted on May, 29 2014 @ 07:25 AM
link
This seems like an appropriate place to voice this opinion, but, I think the American factory worker, on the assembly line, union represented, with full medical, dental and a retirement (ok pensions went to hell in 08, but this isnt a new issue, these companies were leaving before the crash) wants/wanted to make entirely too much money for a rather "unskilled" job. I may be way off here, but, part of the problem(PART! Not all) is that our blue collar rednecked laborers(myself included in that description) want a BMW on a less than stellar salary.

This goes two ways, blame the corporation for maximizing profits... To an extent, yes absolutely.

But nobody ever looks at the greedy workers. People who dont have advanced degrees, people who arent entrepenures, people who have gone to work, and know that there is a ladder to climb, but somehow feel compelled to be compensated for more than 70k per year. Its ridiculous. If you're standing on a fatigue mat, putting screws in a door panel, im sorry, but you deserve every bit of that 12-15 an hour, but no more, especially since a robot can do that same job(if it isn't already)

I'm not trying to rip on every assembly line employee out there, I'm just making an observation, that i feel is somewhat relevant to this topic, that American laborers got entirely too greedy. Its hard to not want better compensation when you see the big picture and billion dollar profits... But let's be real, if you're stationary, and you do one thing, all day every day, why do you deserve 70 or 80k per year? Especially in these states where you can still buy 10+ acres and a 3 bedroom house for WAY under 300k... 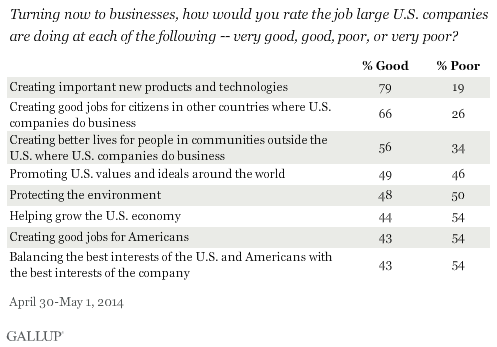 Americans believe that American big business is creating good jobs over seas at 66%.