Waiting out a wildfire

posted on May, 21 2014 @ 10:38 AM
link
Well, I woke up this morning to a heavy haze and ash fall from the nearby Funny River wildfire. We had plans to go camp near Tustumena lake for the week with some friends. Our plans have changed, but our friends still went. We have other friends also in the line of fire who may make our house an evacuation point.
The haze is thick enough that visibility has been decreased immensely and I can smell smoke in my house with everything closed up, and our home has a 5 star energy rating, so it's tight.

I guess I'm feeling antsy, not only have plans changed, but the fire is actively burning only 5 miles from the house. I lived through this once already in 1996 when a massive fire took out countless homes in the Big Lake area. Our family was evacuated the day after school got out that year and we spent the first week of our summer break helping out right back at the high school. Our home survived, but many others did not. One friend's family spent the following winter in a portable military Quonset hut the following winter.

I spent the day yesterday watching the plume from the house and getting ready to either go camping or evacuate eventually. We really are safe, I'm just like that I guess. Here's a photo of the plume from my yard. 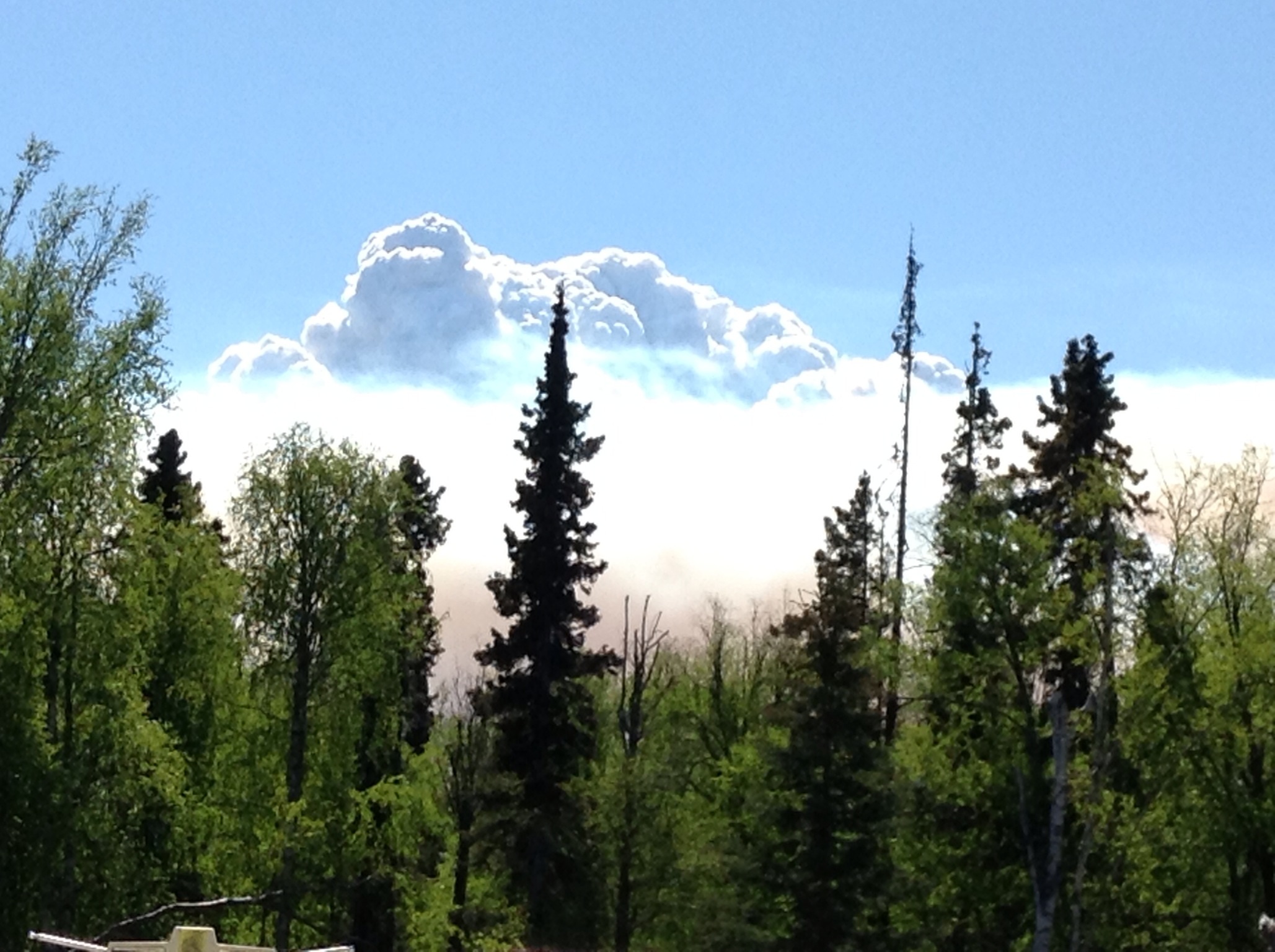 Today the sun is shining blood red through the smoke. I will try to get a photo of that when it comes out from behind the trees.

There is also another fire across Cook Inlet threatening two communities. They evacuated Tyonek Monday evening, or at least started and last night it turned and came within two miles of the town of
Beluga. They have been evacuating elders and other at risk folk to Anchorage and other places to get them out of the smoke. They were evacuated so quickly that they left home without food. They now find themselves on the beaches and other places hungry. The boys and I are going to deliver some food for the evacuees and some water to the firefighters today on the way to see the doctor.

I guess waiting is a tough thing for me to do, so I thought I would toss it out there to my other community today.

All positive thoughts and prayers are welcome!
edit on 21-5-2014 by woodsmom because: Typo

Stay safe and be ready to evac!

Thoughts and prayers for you and your family and home!

Strangely, today and for the past couple of days, I've been working on a fire evacuation "bug out bag", in case we have to evacuate this summer. They say it's going to be a very bad summer for wildfires in our area (Desert Southwest, US).

Thank you both!!
I have my BOBs all lined up by the front door and a loaded camper. If I get the call the photo albums and totes of pictures get thrown in too. We even have the halibut poles grandpa made in the boat ready to be hooked up at a moments notice.

Benevolent Heretic, don't forget to round up the irreplacables. After the Big Lake fire people were more devastated by things that they could never replace. Food and clothes and even walls can be replaced. Be safe yourself, it's rather nerve racking.

posted on May, 21 2014 @ 11:52 AM
link
When I think of what I have that cannot be replaced, the only thing (besides people and pets) are photographs.
Do you have any put away to take with you if you have to leave?

I know it's kind of trivial, but I can build a new house and buy more "stuff", but can't get back the pictures of the kids before they turned into monsters teenagers.

edit to add: should have read the last post better.
edit on 21-5-2014 by network dude because: reading comprehension issues

Nat!!
How are you?
Everyone got so scattered, and I miss you all!
Thanks for your positive thoughts, anything to help at this point. I just read a little bit ago that it has actually started growing in my direction. They are still only talking about evacuations, hopefully they figure them out before roads get cut off. I am in a better position than many others around this beast though. I can't get blocked into my neighborhood.

Network dude, I couldn't agree more. Our munchkins grow too fast. I have totes and totes of them, as well as the fishing poles their grandpa made himself before he passed away. Aside from enough daily gear to get us by, that has been my major focus. I must say though, already having my bare necessities ready to go has given me the luxury of time to figure out the incidentals, like photos and fishing poles.
edit on 21-5-2014 by woodsmom because: Typo

My depression hit hard not too long ago but I've been going to therapy and sorting things out
I had an EMDR session today.. It's a diff type of therapy and it sure helps.

I know..everyone did get scattered.. Ehh.. It happens I supposes.

Hopefully you guys will continue to stay safe and not have to evacuate!!

Well, much love and many hugs to you sweetie. I hope you are feeling better.
Be strong and all shall pass. It's hard sometimes, but it really does. Dance it out right?

Thanks again for your well wishes, and I hope we don't have to either, my gardens are already planted.

Oh me.. I bet your garden is beautiful. I snapped two pics of my favorite plant that's in my tiny garden out front.. See I don't know names of many flowers.. But these lil guys are pink and they close when the sun isnt out and open to the sun... And they are in what looks to be like clovers of some sort.. Anywho.. I just love them..they are so pretty and make me smile when I see them open.

Hello stranger ...Hope your well. And most importantly keep safe. I was wondering where you had gone
edit on 5 21 2014 by TheDoctor46 because: (no reason given)

Hi there!
My hibernation ended early this year, I still had snow on the ground a year ago, and now the state is just lighting up with fires. Most of them small luckily. Things keep shifting around here. I just got word a little bit ago that they have now closed the road between the fire and the other side of the river. My lovely newborn reminded me that it is mostly swamp between us and the river on this side. That helped.

I told my boys that we are getting ready to go camping, just somewhere different. My oldest boy says " mom are we going camping or are we evacuating?" I love that he picked up on things, but darn it, I tried to keep him from worrying too much. Honestly last I heard there are still no official evacuations, we may just go somewhere that the air is a bit clearer.

I hope all is well with you too! Did your move go smoothly?

Yes children sure do pick up on things. They are way smarter than we give them credit for!!. Well i hope things work out well for you there. It must be a nightmare having to consider evacuating your home. Yes my move went great. A nice easy move. I left most things and just took myself and clothes and my car and bits and bobs. I carry light lol. Im not doing to bad in all. Nice to hear from you again

posted on May, 21 2014 @ 06:33 PM
link
You too! I'm glad to hear it all went smooth. Traveling light is the only way to go! It's times like these today that I miss living out of a backpack. Fortunately walls are fixable, I would rather leave them behind to preserve the things that can't be replaced.

And newborn was a bad typo, I really dislike this touch pad keyboard some days, it was supposed to say neighbor, haha.

Thank you Night Star!
We will be safe, I only hope the same can be said for our home and so many others.
We are getting some serious back up now from the bad ass smoke jumper crews from California, Hawaii, and Alberta, Canada. One of the guys from Hawaii even let my boys sit in his helicopter this afternoon. It was super sweet.

posted on May, 21 2014 @ 11:52 PM
link
I want to extend my deepest personal thanks to all of our firefighters and hot shot crews coming in to help us out! You guys are awesome for keeping us safe!!

If anyone out there has any more updated info on where the fire has gone, please share!!
The latest info available was from last night before bed. The fire had then spread to 44,000+ acres. I know there has been spread since then, last I had seen was that it was still 0% contained.

If any Alaska reporters encounter this, please find out what's going on and let us know!!
If any of our awesome firefighters see this please fill us in.

Ya know I live all the way up here in Cortez CO.
and this morning I could see the haze and kind of smell the smoke from all the AZ fires.
and I'm like 265 miles from the one there in Flagstaff


edit to add... you might find this handy to have.
The Arizona Emergency Information Network (AzEIN) is the state's online source for real-time emergency info