S&F for spooking to soon! LOL!

originally posted by: zeevar
Dam this ATS and its infernal clumsy controls... bare with me, post will be up interfrasticly....

posted on Apr, 19 2014 @ 08:18 AM
link
Back in the early seventies I was in a boarding school, a great old house with connections to the brewery's in burton.
It had its spooky moments, ie you would see a shadow sat by the light at the bottom of a door walk past, no one bothered to get up to see who it was because it was a dead end and there was always no one there.
One particular night I got up to go to the toilet, the route took you onto the balcony over looking the main hall, this particular night I bumped into one of the house masters who was engrossed with looking at the main stair way and ignoring me.
I looked over to the stairway a notice a woman waking up the stair, her back was too me, but I noticed she had long dark hair and she wore a grey/white cape coat type thing.
She ascended the stairs (which split at the top) and turned left to go up the next small flight, she vanished from view which would of been normal but never emerged at the top, she had totally vanished.
The house master turned to me and tapped his nose saying "Dont tell anyone."
I later found out from him that he had seen her a good few times, doing the same thing, there were a few other things he hinted at but never told me, shame...But I felt privileged to see what I saw.
When I find it I will post a picture of the stairway, and the old house. 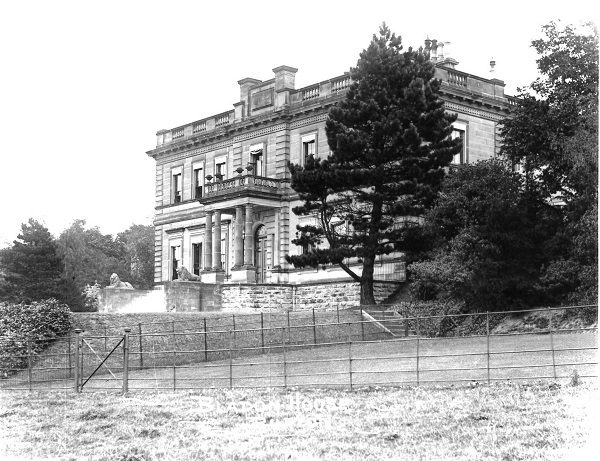 Is the house still standing? Maybe there have been more sightings by new residents.

And look at the lion statues in front. Cool. I want to own that house, and run around the roof.

Did you hear any stories about the ghost lady when you lived there or afterwards? Or was this sighting between you and the employee who signaled you not to talk about it the only one you knew about?

posted on Apr, 19 2014 @ 08:56 AM
link
a reply to: Aleister
Like with any young boys and their hyper imaginations there were always stories, most all of which were just made up to scare the newbies, though one particular story was a girl died i one of the rooms during a fire, and in that room bedding was prone to being pulled off the bed in the early hours.
I think a lot of it was played down as to not alarm the kids there.

I looked over to the stairway a notice a woman waking up the stair, her back was too me, but I noticed she had long dark hair and she wore a grey/white cape coat type thing.


Thing is would you (to this day) have thought you saw a real person if the housemaster hand't told you about her?

I too have seen life like ghosts so real I thought they were real people until someone else told me about them.

Interesting thoughts surrounding what it must be like over there.

posted on Apr, 19 2014 @ 09:41 AM
link
Do you mind stating where the haunted house is located? If not too specific, maybe the state? I always wondered if I visit a haunted house if I would get any unique reactions from any ghosts present. I just heard two strange noises from my house while reading this thread. Sometimes I wonder if something or someone is trying to get my attention.

Such an awesome story and awesome picture!

posted on Apr, 19 2014 @ 10:11 AM
link
a reply to: intrptr
No, it was just strange all round, it was an all boys boarding school, and just unusual to be seeing a woman walking up the stairs, and the atmosphere was a little different, so even with out the housemaster she would of been watched, it was just that she vanished at the point where she should of appeared that put the lid on it.

posted on Apr, 19 2014 @ 10:13 AM
link
a reply to: orionthehunter
Out side burton on trent.
I always equate some noises and moving objects with attention grabbing.

posted on Apr, 19 2014 @ 10:17 AM
link
a reply to: DietJoke
It was built after when tunnels were the must have item, the place was thoroughly checked out, all I can say was there was a typical wine storage cellar and a mushroom cellar.


it was just that she vanished at the point where she should of appeared that put the lid on it.


For you. But I notice you added the House masters comment at the end. Otherwise, others might have doubted the voracity of your story a bit more. You say you wouldn't have doubts about it, okay.

But I bet it helped "put a lid on it" for you just the same.

posted on Apr, 19 2014 @ 11:00 AM
link
a reply to: intrptr
Like many stories on here you have no proof other than their word, the choice is yours to believe or not, if the house master wasnt where he was I may just of walked on without looking over the balcony and not seeing anything, he said what he said because (I believe now) so as not to encourage any shenanigans.
I never told anybody there then because no one would of believed me anyway.
A bit of my past that I have shared., nothing more.

I for one deeply appreciate the candor you have brought to this thread!

posted on Apr, 19 2014 @ 11:15 AM
link
As promised....(a nice historical picture before the house became a boarding school)..of the stair way (with domed window as mentioned earlier).
We were stood pretty much above and too the middle left of where the painting was done as the balcony went all the way round, the woman walked up the steps on the left and turned up the left flight. 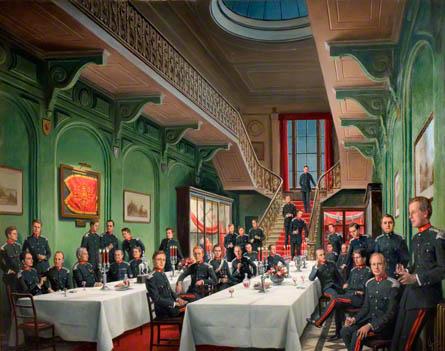 Nice. It reminded me of the Harry Potter dining room, where the ghosts went up and down the aisles.