here is another thread on a subject that has been discussed in the past, but has not been explained to my satisfaction. Here is the video:


I cannot find another pic or video of the same phenomenon. The video looks genuine. Maybe it is photoshoped, if it is its a good job. The full video is here.

Note that not all the clouds have the same effect. What does the shadow use as a "backdrop" to be projected on?

How does this happen? (I am mad because I want to understand......)


My guess is water vapor and or dust and smoke. A shadow has to fall on something. A beam of light (or a shadow) becomes visible when reflecting off something.

Small particles in the air suffice to block light as well (like "cloud shadows"). Otherwise, light is invisible.

Contrails do it, too.


The shadow is behind the cloud projected on the atmosphere.

Which source of light is strong enough to outshine the sun and illuminate a cloud to cast a shadow on the atmosphere or haze/something.

the pictured you show have shadows made by the sun pointing downwards not upwards like in the video.

Do you see the difference?

Perhaps the source is the sun? Let me check where is the sun based on the shadows on the ground.
edit on 16-4-2014 by bitsforbytes because: (no reason given)


The shadow is behind the cloud projected on the atmosphere.


No its not. It just appears that way because the videographer is standing in the shadow made by the cloud.

Oh, wait… thats right, you have discovered the sun on the ground.

Do you think the moon is on the ground too?

i think if this footage is fake (photoshop, etc) the purpose seems to be for steering people in a certain direction (i'm sure there's more than one tinfoil hat wearer out there who knows exactly what & where that direction is) try viewing the associated SheilaAliens(youtube) sky-phenomena presentations and it's almost like following a trail of breadcrumbs.. (chemtrails, triangle orbs, barium/strontium, shapeshifting clouds, melting moons, etc)

i think if it's real, then there's something interesting going on here also..

either way, it's pretty much tinfoil country


I want to understand how the illusion works if it is an illusion. So far a poter has mentioned that because the camera is in the shadow of the cloud it appears to bd behind the cloud.

I dont get it


The shadow is projected on the higher level clouds - its a phenomenon I've seen a few times. The sun is lower in the sky to the side of the cloud.
edit on 17-4-2014 by AndyMayhew because: (no reason given)


Okay, do you mean that the sun is about to set?

The light on the clouds suggest the sun is behind the clouds. No?
edit on 17-4-2014 by bitsforbytes because: (no reason given) 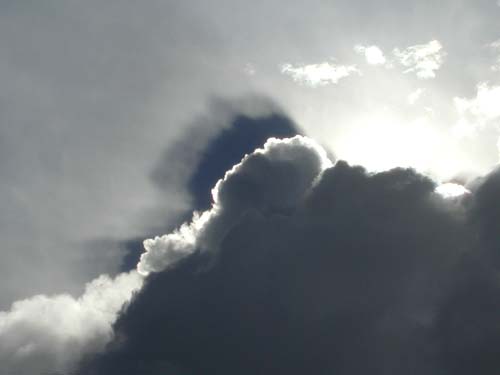 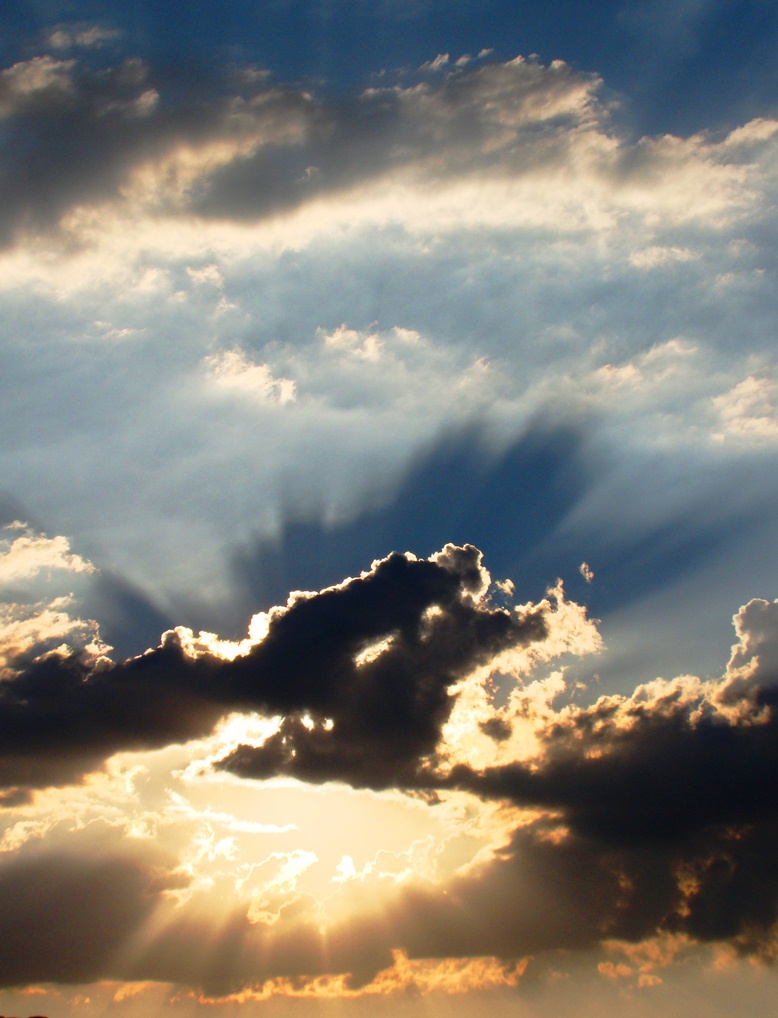 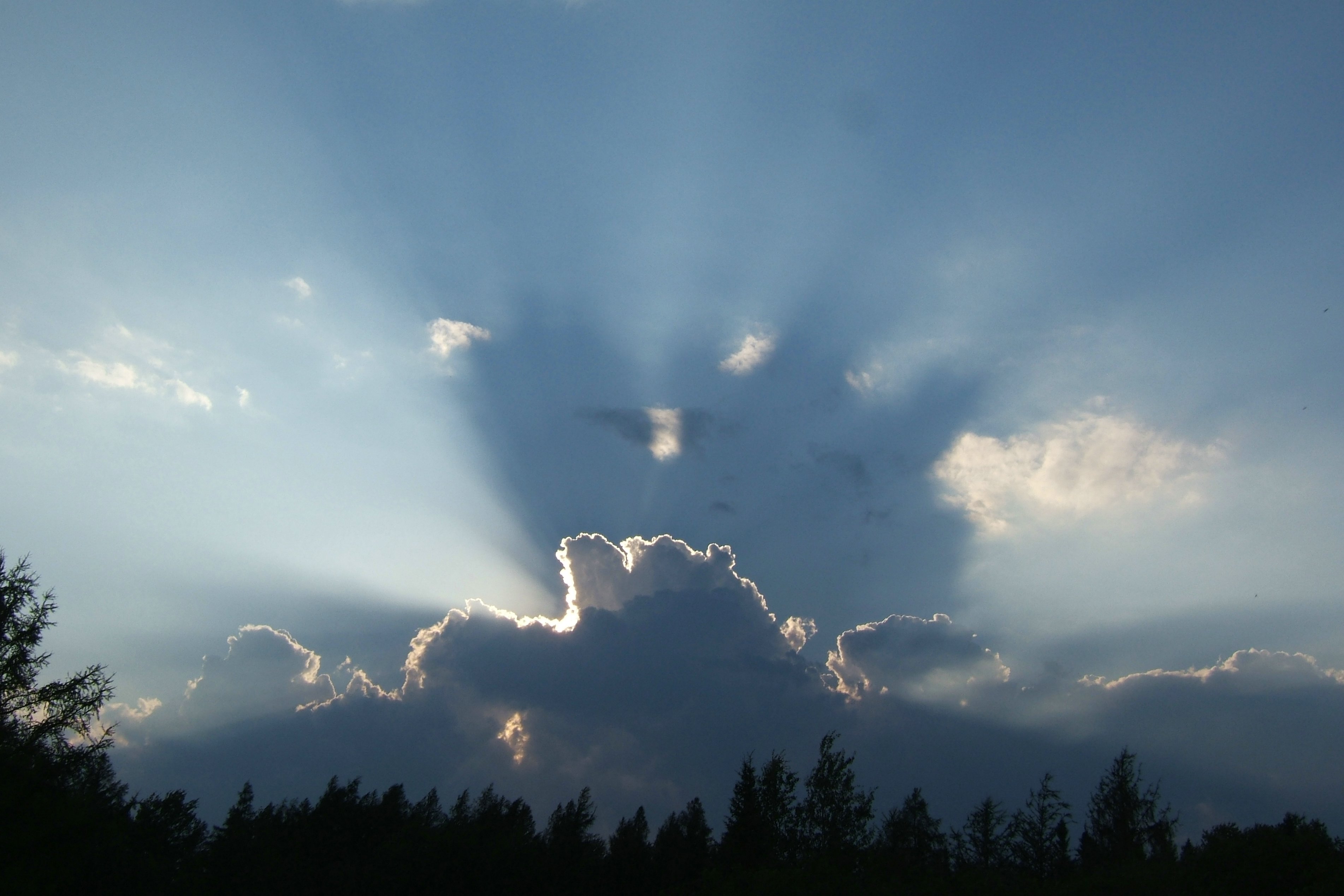 
Ever hear of those crazy anomalies, known as sunrise and sunset?


Nice i see! I am satisfied


Yes! I believe sunrises occur when @$$holes wakeup and sunsets when they go to sleep.

Its okay to call me names to my keyboard, I can take it.

Now, get your head out of the clouds.

posted on Apr, 17 2014 @ 06:27 PM
link
Thanks for the response guys, I understand why this happens now. Those crazy abnormal sunrises and sunsets making me say hmmmm.

Wasn't talking to you, by the way. I was addressing the smart@ss remark from parad0x122.

BTW, parad0x122 I apologize for my bad reaction, I took it personally. I am sorry.

originally posted by: intrptr
Oh, wait… thats right, you have discovered the sun on the ground.

Because clearly, I'm the smartass here.

No harm no foul, I take no offense.

You're right… I apologize for those remarks.

It's all good mate, I was razzing you too :-D Mutual misunderstanding, cheers!