posted on Apr, 11 2014 @ 09:39 AM
link
The mammoth collision likely posed a severe challenge for life on Earth, which first evolved about 3.8 billion years ago. The sky would have filled with dust and become incredibly hot, while the upper layers of the ocean would have boiled, researchers said. 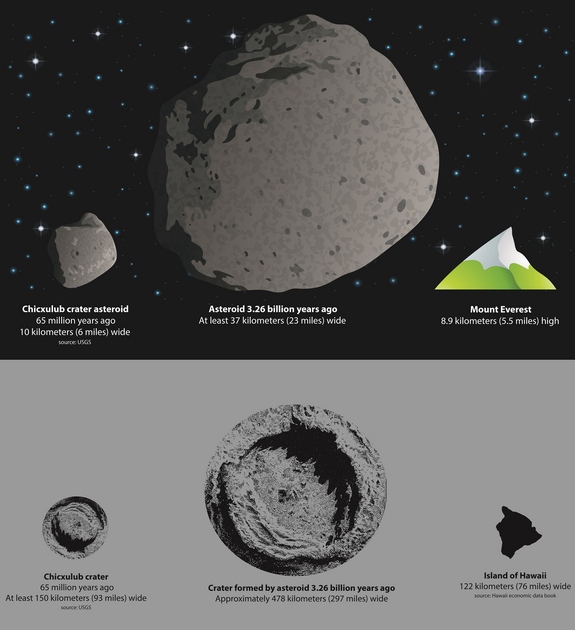 A graphical representation of the size of the asteroid thought to have killed the dinosaurs, and the crater it created, compared to an asteroid thought to have hit the Earth 3.26 billion years ago and the size of the crater it may have generated. A new study reveals the power and scale of the event some 3.26 billion years ago which scientists think created geological features found in a South African region known as the Barberton greenstone belt.

Scientists have reconstructed a long-ago asteroid impact that makes the strike that wiped out the dinosaurs 65 million years ago look like a playful chuck on the chin.

The enormous collision occurred 3.26 billion years ago and involved an asteroid 23 to 36 miles (37 to 58 kilometers) across — four to six times wider than the dino-killing space rock. The impact created a crater about 300 miles (500 km) wide and generated seismic waves far more powerful than those produced by any earthquake in recorded history, researchers said.

The asteroid impact was "far larger than anything in the last billion years," Jay Melosh of Purdue University, who was not involved in the new study, said in a statement. [Wipe Out: History's Most Mysterious Extinctions]

Researchers Norman Sleep and Donald Lowe, both of Stanford University, mapped out the details of the cataclysmic strike after studying rocks in a region of South Africa known as the Barberton greenstone belt.

The space rock probably hit far away from the Barberton formation, in a location that researchers may never find. But it left its imprint on the South African rocks and on the entire Earth, disrupting the planet's crust and possibly spurring a transition from an early tectonic regime to the more modern plate-tectonic system that prevails today, researchers said.

"This is providing significant support for the idea that the impact may have been responsible for this major shift in tectonics," said UCLA geologist Frank Kyte, who was not a member of the study team.

Space rocks hitting our fragile little planet are common. Too common. That one was a whopper.

It occurs to me that the whacky "expanding earth" proponents might be onto something but are just misguided as to how this planet is growing... maybe we gain mass by more asteroid hits than thought?

I am kidding about that, but I do think space rock impacts are a concern we need to be aware of and equipped to avoid, obviously.

I didn't know what the Barberton formation was.
www.barberton.co.za...


According to Dion, Prof Christoph Heubeck of the Free University of Berlin did a thesis on the rocks of this area. He said the site included the best examples of the most important geological exposures. Some of them was shown on the route, one being formations containing the first microfossil evidence of life on earth, such as stromatolites and biomats, which can actually be seen with the naked eye.

what is this,
The Faint Young Sun “Paradox”?


Carl Sagan and George Mullen identified the paradox in 1972. By then, researchers had determined that a newborn star’s brightness gradually increases over time as hydrogen atoms in the star’s core fuse into helium. Working backward, researchers estimated that the sun generated 20 to 30 percent less energy during the first half of Earth’s history than it does now.

The only explanation is that some unknown factor helped warm the planet.

Many climate scientists agree that some sort of enhanced greenhouse effect probably contributed to heating the planet.