posted on Apr, 10 2014 @ 12:25 PM
link
So contrary to Russian rhetoric coming from Moscow and after the annexation of Crimea Russia still continues its destabilisation program in Ukraine's Eastern regions using every means possible 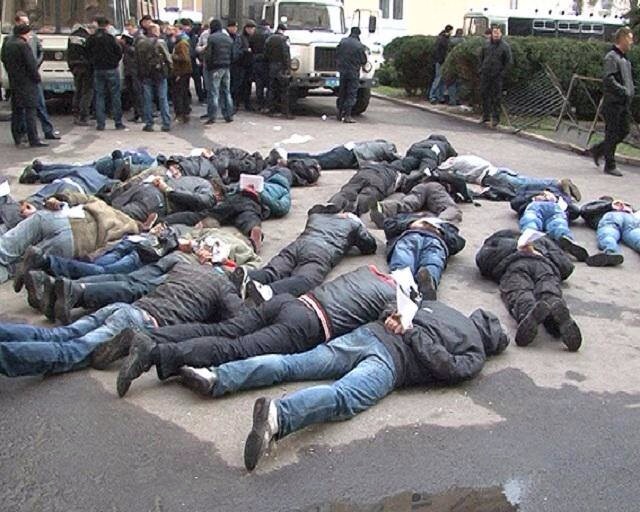 The Security Service of Ukraine (SBU) confirmed March 16 the arrest of a group of Russians in the Zaporizhzhia (Zaporozhye) region of Ukraine. The men were armed with firearms, explosives and unspecified 'special technical means'.

This follows the March 14 arrest near Kherson, Ukraine of several Russians dressed black uniforms with no insignia, armed with AKS-74 assault rifles and in possession of numerous ID cards under various names. One of which was an ID card of Military Intelligence Directorate of the Russian armed forces; commonly known as 'Spetsnaz'.

These men were being guided by an ethnic Russian Ukrainian in what appears to be reconnaissance of the 3 Ukrainian army divisions deployed in Kherson.

Spetsnaz commandos operating in eastern Ukraine would have the missions encompassing general ground reconnaissance of Ukrainian army units. They would also have missions conducting provocateur operations dressed in civilian attire, passing themselves off as local ethnic Russians to stir trouble between Ukrainians and local Russians, organize and provide arms to local militants as happened in Donetsk on March 11.

An 23-year-old 'Russian spy' has been detained in Ukraine amid claims Vladimir Putin is seeking to destabilise the country. Ukrainian authorities say Maria Koleda was on her ninth mission to the ex-Soviet state, wounding three people with firearms and training two armed subversive groups. The detention comes on the fourth day of a stand-off in two cities, as Ukraine's government warned it was prepared to use force against pro-Russian activists who barricaded themselves inside government buildings and begged Vladimir Putin for back-up. Read more: www.dailymail.co.uk... ed-subversive-groups 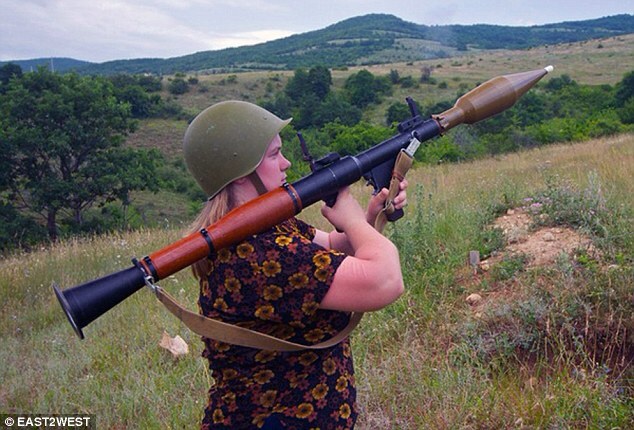 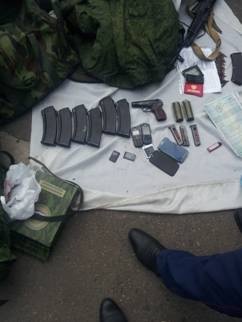 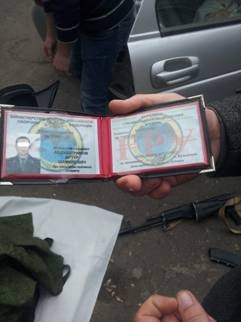 March 14, 2014, a Russian citizen heading to the Autonomous Republic of Crimea was apprehended at 10 a.m. near a temporary checkpoint in Chonhar. A personal search revealed that the man had the AKS-74 assault rifle with 5 magazines loaded with live ammunitions. He was wearing a black uniform of a special force officer without insignia. The foreigner possessed several identity cards issued on different names. The Security Service of Ukraine acquired a document confirming that the detainee worked for the

Military Intelligence of the Armed Forces of the Russian Federation. It is established that the Russian citizen was performing espionage and subversive tasks in Kherson region. The SSU Office in Kherson region carries out urgent detective-investigative actions to identify his accomplices. Relative documents have been referred to the European Court of Human Rights in addition to the evidence base of Declaration 209558/14, Ukraine vs. Russia, of March 13, 2014. The SSU will ensure that all the facts of illegal and dangerous activities, which violate the Convention for the Protection of Human Rights and Fundamental Freedoms, are passed to the European Court of Human Rights and the UN Security Council.


Russia’s intelligence agency has infiltrated almost every level of Ukraine’s government, particularly its clandestine service, since the ouster of pro-Russian President Viktor Yanukovich, making it extremely difficult for the United States and its European allies to keep secrets from the Kremlin as it continues to destabilize the fragile region, current and former U.S. officials told TheBlaze. 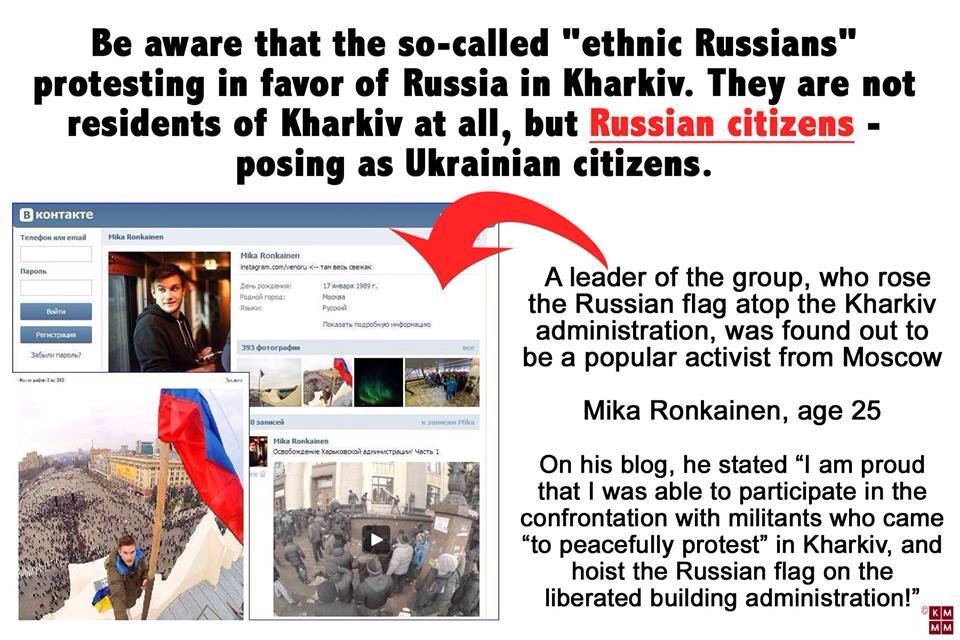 
Andrei Illarionov, formerly Vladimir Putin’s top economic advisor (and personal envoy to the G8) , has warned in an interview with Ukrainian television that Putin has already declared war on Kiev. Putin’s war is being conducted by Russian Spetsnaz (special operations) forces and KGB (now called FSB) agents and is aimed at toppling the pro-Western government in Kiev. The Spetsnaz forces’ orders include the sowing of civil unrest throughout Ukraine via strikes, demonstrations, staged incidents, and street battles. Putin’s subversive forces will also gin up neo-Nazi incidents with Nazi regalia and Swastikas on full display. Their orders include as well the deliberate killing of Russian soldiers and of ethnic Russian civilians to prove the hatred and extremism of radical Ukrainian nationalists. These orders come from Putin himself. Their goal is to create an image of intolerable chaos and loss of civil authority to justify a Russian takeover of all Ukraine. Putin’s goal is the destruction of pro-Western authority in Ukraine, the total humiliation of the West, and a makeover of the geopolitical balance.

Russian activists from Russia, Russian spetsnaz and agents have all been caught red handed operating towards destabilisation in the East of Ukraine all while mr Putin threats action towards Ukraine's government for responding to there meddling in Ukraine's national integrity with force that it has every right to use to stabilise the situation within its boarders

This is not something Ukraine can do alone especially given other crisis such as energy blackmail and threats from the Russians, Russia has its hand firmly around Ukraine's neck right now and I really do fear for the poor Ukrainian people in this violent and messy divorce

Wow that was a quick propaganda piece they got out quick lol ....I like the pic they have of her with the rocket launcher .:>) - See more at: www.abovetopsecret.com...


My thoughts exactly...a little too timely and convienient I say...given that an American merc was caught just yesterday. Makes one think this story was cocked and loaded just waiting for an opprtunity to use it.

What Russian spy walks around with an ID that says...ocupation: SPY. LOLOLOLOLOL

Thanks for posting that RT video....shows just how pathetic the western media are.

I don't trust the people in power in the Ukraine at all.

This just doesn't pass the sniff test in my opinion.

The woman with the RPG made me laugh....she's no killer. Trained subversive groups my a$$. She couldn't walk up two flights of stairs without collapsing from the effort....LOLZ.

posted on Apr, 10 2014 @ 12:41 PM
link
I'll bet there is a lot of Russian spies in Ukraine right now, Russia has a lot to gain if they convince Ukraine to join with them, Their Baltic Sea Fleet is located in the south

Glassbender777
I'll bet there is a lot of Russian spies in Ukraine right now, Russia has a lot to gain if they convince Ukraine to join with them, Their Baltic Sea Fleet is located in the south

If I was Putin I'd be sending the 40,000 odd troops sitting just a few miles from Donetsk and other Eastern Ukrainian city's in across the boarders in plane clothes to pretend to be Russian speaking Ukrainians


Well the first thing that tipped me off was the pic in the op ...I had seen it a day or two ago on another news cycle ..I went to look for it but I thought the SPY id was a gem lol


Right now there are a lot of Russians in Ukraine and has been for quite a while .Putin don't need to send in any spies .And if he did they wouldn't be carrying id that says they are a spy lol

the2ofusr1
Wow that was a quick propaganda piece they got out quick lol ....I like the pic they have of her with the rocket launcher .:>)

It's not quick propaganda

Everybody knows Russia has the country flooded with civilians activists, agents, spetsnaz, and spy's working towards destabilisation in the East of Ukraine... Everybody also knows Ukraine has called on the UN for support and they are assisting Ukraine to stop and deter the Russian flood

.I went to look for it but I thought the SPY id was a gem lol

I can't believe anyone would fall for this garbage. I'm looking for the first pic that was posted by the OP of those so called "spies" lying facedown on the pavement....I know I've seen that before as well.


Right now there are a lot of Russians in Ukraine and has been for quite a while .Putin don't need to send in any spies .And if he did they wouldn't be carrying id that says they are a spy lol 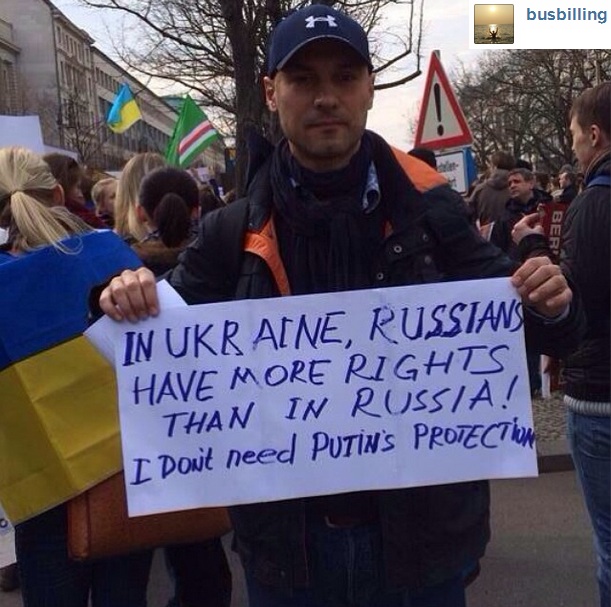 
But we all know the reality 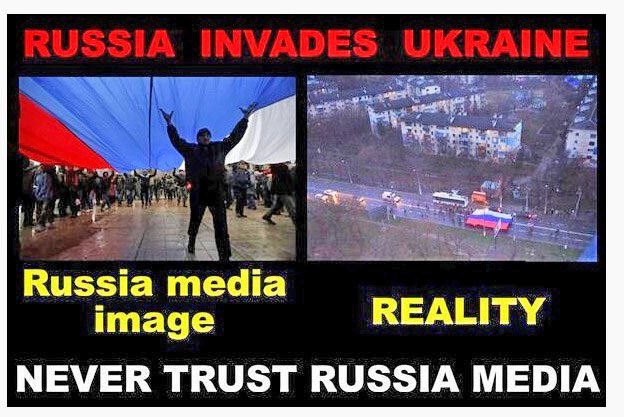 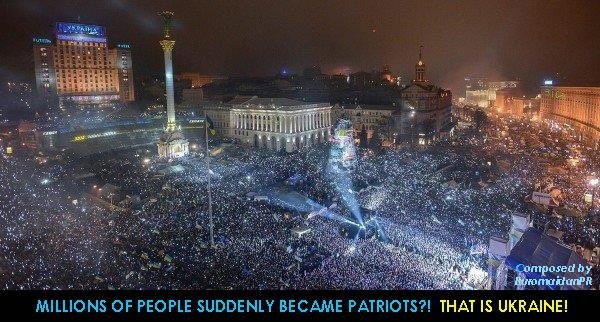 
Russians in Ukraine form the largest ethnic minority in the country, and the community forms the largest single Russian diaspora in the world. In the 2001 Ukrainian census, 8,334,100 identified as ethnic Russians (17.3% of the population of Ukraine), this is the combined figure for persons originating from outside of Ukraine and the autochthonous population declaring Russian ethnicity


I guess that guy in the pic didn't get the memo from Putin who increased the pensions in Crimea by 50 % while the EU cut the pensions in 1/2 in Ukraine imposed by the IMF through austerity measures ..He may snap out of it when he gets his next gas bill if he ever gets gas again .

They went home Dan .It's a long weekend .lol

posted on Apr, 10 2014 @ 01:11 PM
link
And so it goes...............I read a novel once...and every time a person died that saying followed the event.....
Kind of expresses my disgust for the real game of thrones the elite are playing with humanitys world....
I teter on the edge of total withdrwl and active resistance constantly....

Danbones
where is a pic of all the russian troops supposedly massed on the border?
that I'd like to see

Here but one link you can look at
www.dailymail.co.uk... ps-run-three-hours.html 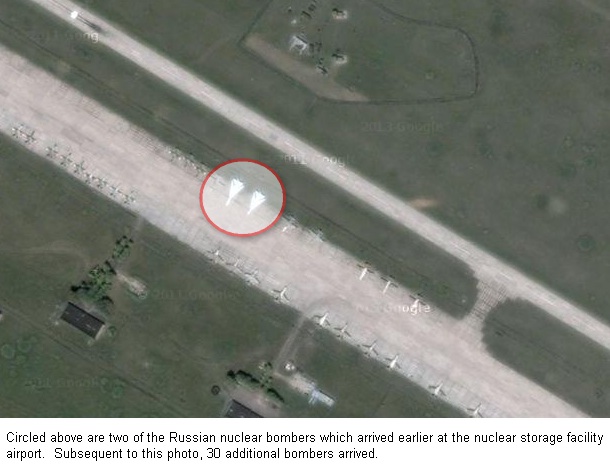 posted on Apr, 10 2014 @ 01:42 PM
link
For anyone that may have jumped into the Ukraine issue and want to see some info that came out early but has been a constant barrage of the propaganda out of the west this is a good vid to watch . judge for yourselves www.youtube.com...

Here but one link you can look at


Here are a few of the tag lines at the bottom of the pictures in the article you posted....


Heading to Ukraine? Armoured personnel carriers near Rostov in Russia

Rostov is just under 388 miles from the Ukranian border....BTW.

This is 70 miles from the Ukranian border BTW....but really... that picture of one lone APC on a truck could have been taken anywhere. I certainly hope that the Russians have more than 1 APC to lend to the effort if they plan on "Invading" the Ukraine....LOLZ.

This is what you use to prove massive troop movements along the Ukranian border?

Setting aside for the moment those 2 "nuclear bombers" look like a crappy photoshop job....where did you get this image? Link?

Reminds me a lot of those mobile WMD launchers in Iraq....hahahaha


Where is this airbase with the 30 "nuclear bombers" mentioned?