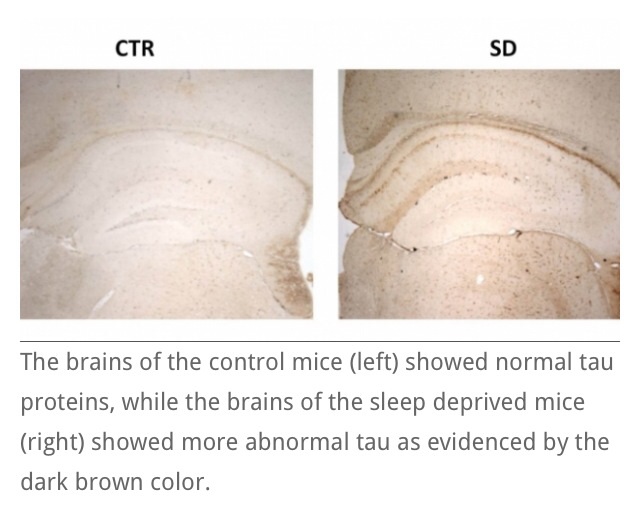 
A recent study was done by Temple University to determine if chronic sleep deprivation is a risk factor for Alzheimer's and Dementia.

People who experience chronic sleep disturbance—either through their work, insomnia or other reasons—could face an earlier onset of dementia and Alzheimer's, according to a new pre-clinical study by researchers at Temple University.

"The big biological question that we tried to address in this study is whether sleep disturbance is a risk factor to develop Alzheimer's or is it something that manifests with the disease," said Domenico Praticò, professor of pharmacology and microbiology/immunology in Temple's School of Medicine, who led the study .

"At the end of the eight weeks, we didn't initially observe anything that was obviously different between the two groups," said Praticὸ, who is also a member of Temple's Center for Translational Medicine. "However, when we tested the mice for memory, the group which had the reduced sleep demonstrated significant impairment in their working and retention memory, as well as their learning ability." The researchers then examined the mice's brains to look at the different aspects of the Alzheimer's pathology—mainly the amyloid plaques and tau protein tangles.

"Surprisingly, we didn't see any difference between the two groups in the amyloid plaques," noted Praticὸ. "However, we did observe that the sleep disturbance group had a significant increase in the amount of tau protein that became phosphorylated and formed the tangles inside the brain's neuronal cells."

Tau protein acts as an important component for neuronal cell health, but elevated levels of phosphorylated tau can disrupt the cells' synaptic connection or ability to transport a nutrient/chemical or transmit an electrical signal from one cell to another, said Praticò.

Alzheimer's runs in my family, developing it is a major fear of mine. If poor sleep habits can contribute in any way to Alzheimer's and Dementia then I want to have excellent sleep habits. Here are 7 sleep tips from the The Mayo clinic.

Never heard of brain tangles before, this is what they look like, definitely looks tangled up.

Image of healthy brain cells vs Alzheimer's cells from alz.org 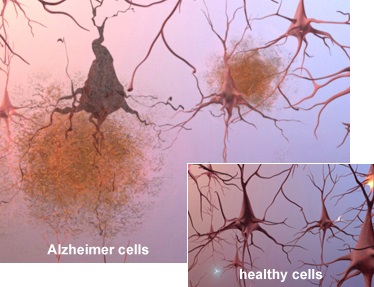 Scientists are not absolutely sure what causes cell death and tissue loss in the Alzheimer's brain, but plaques and tangles are prime suspects.

posted on Mar, 22 2014 @ 02:19 AM
link
A subject close to my heart after watching my grandmother deteriorating over years and eventually passing on few months ago,whats even more worrying is I've only ever sleeped between 5 and 6 hours a night since I was a child.

posted on Mar, 22 2014 @ 03:42 AM
link
The correlation makes sense. Think about it, sleep is our body's way of encouraging repair to all kinds of damage. And I also liken sleep to a computer defrag, sleep helps the brain sort and store information. If damage can't be repaired as easily, and if our brains can't organize the day's information, it doesn't help any in the long run.

Thanks for this nice OP...S&F
I was laid-off two weeks ago so that really ruined my sleep routine big time and Alzheimer's is my Mother's side of genes.

posted on Mar, 22 2014 @ 05:21 AM
link
I'm not inclined to put too much weight into this study. If it were true,every sleep deprived mother would develop alzheimers later in life. Not to mention every shift worker. I read a study that claimed alzheimers to be type 3 diabetes and that the brain deterioration was caused by sugar intake. I suppose alzheimers could have as many causes as cancer and depends on the health of the individual. Multiple triggers depending on physiology?