1. The Chinese have been hacking technology firms in the USA for a long time. Free Scale is most probably one of them.
Tech firms in Chinese hacking firering line
Free Scale is a tech firm
2. The Chinese hackers found out that so many of the engineers would be on a single flight.
3. The Chinese then setup 2 Iranian lads with easy access to fake passports an tickets.
- have a couple of Chinese spies act as black market dealers in Thailand, sell some passports and then allow easy purchasing of plane tickets in Phuket.

How did it happen?

1. Once the flight took off, the Chinese remote disabled the communications equipment. Either through a laptop that had been carried on-board by a passenger or by another means.
2. The Chinese disabled the transponder and beacons on the plane.
3. The Chinese remotely controlled the plane, dropped it down to a level under radar and flew it to an isolated base
- this explains why fisherman reported seeing a low flying plane
4. The Chinese landed the plane, executed everyone ACCEPT the engineers
- they didn't want anyone to know what happened, this is why they didn't just kidnap them. They want the world to think the planes destroyed.

1. Why the plane dropped in and out of radar. Flying low doesn't always work.
2. The passengers mobiles are ringing. Maybe the Chinese were diligent enough to go through baggage and smash all the phones Link
3. Why the Chinese backtracked on reports they tracked the plane 100's of kms away in the wrong direction
Initial report: Straits of Malacca
Backtrack: Military denies tracking plane
4. Why the media seemed to focus on the Iranian nationals
5. Why no pieces has been found
6. The black box isn't transmitting (Apparently it should for 30 days, unless its been turned off) I'm guessing the Chinese have the technology to do this.

I tell you what... If i die in a car crash tonight please remember me!

posted on Mar, 11 2014 @ 11:57 PM
link
That is a very interesting point, S&F, I was talking about this with a few co-workers all day.....that something didn't smell right, and that it was simply stolen....Call it what you want, a hijacking for ransom or kidnapping for other reason, but the plane was taken not crashed.......

Starred and flagged from lj01.

Kind of "stuff" I like to read and think about.

Maybe they had a breakthrough and China didn't like the idea they were coming home to tell daddy.


This is the best theory I have heard so far because you have identified a motive. All crimes require a motive.

posted on Mar, 12 2014 @ 12:07 AM
link
This could also explain why Vietnam, Malaysia and China seemingly arent in lock step in searching for this.

Malaysia knows what happened.
China's trying to cover it up
Vietnam are genuinely trying to find it, but are being blocked at every attempt.

From the time flight MH370 went missing, the nations involved in its search have been out of step - in particular Malaysia and Vietnam.

Vietnam was quick to contribute its resources to the search effort and even quicker to make public each potential development. They promptly announced everything from reported radar readings to oil slick sightings and possible floating debris.

posted on Mar, 12 2014 @ 12:25 AM
link
Was going to make a similar thread earlier, want to say good work on the thread
IMO Thinking along the lines, something isn't right - The plane was said to have appeared then to dissapear again, then said to have changed course... the talk of cloaking... The possible tech being used. As mentioned in prior thread replies to this, the multiple engineers(and related) on the plane, is suspect. Perhaps the experiment didn't turn out too well. Or maybe some were on a certain hit list.
edit on 12-3-2014 by dreamingawake because: (no reason given)
edit on 12-3-2014 by dreamingawake because: correction, sorry tired lol

posted on Mar, 12 2014 @ 12:36 AM
link
Just to be clear, I don't think the plane was cloaked.. I believe it was hijacked.
It was hijacked because the Chinese government wanted to kidnap the engineers who were working on cloaking technology and put them to use for their own military.

posted on Mar, 12 2014 @ 12:41 AM
link
How about instead of shooting the rest of the passengers they drop a few from a high altitude in a few different areas with some type of plane debris scattered about this way the illusion of a crash will throw off some suspicion.

Agit8dChop
Just to be clear, I don't think the plane was cloaked.. I believe it was hijacked.
It was hijacked because the Chinese government wanted to kidnap the engineers who were working on cloaking technology and put them to use for their own military.

And to be clear myself wasn't saying you said that. IMO that's my conclusion about the cloaking.

Kidnapped, can see that as mentioned, the country would be in higher suspect than Iran for example if it were just terror-kidnapping(though updates say the passport theft likely was not linked to that).
edit on 12-3-2014 by dreamingawake because: (no reason given)


and then have a chinese vessel locate it ? 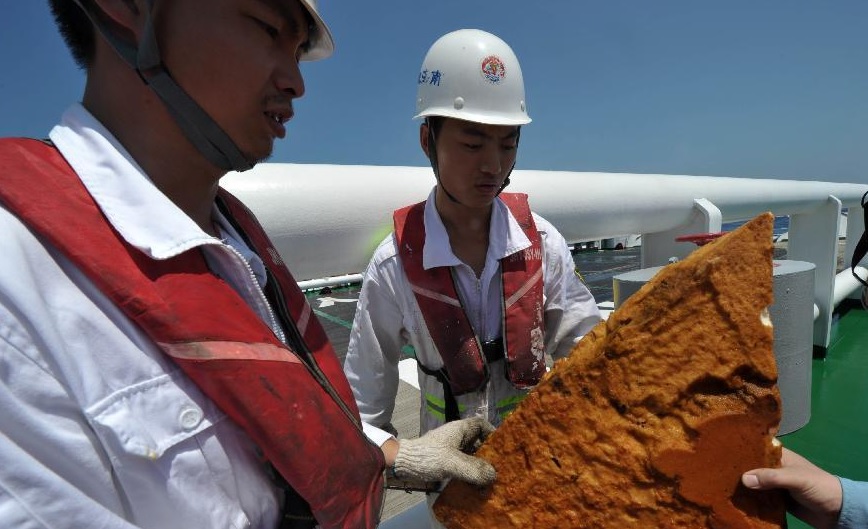 But we still need a couple of bodies with no bullet holes to complete the illusion of a crash.

On Tuesday, three days after the plane disappeared while on an overnight flight to Beijing, the country’s air force chief, Gen. Rodzali Daud, was quoted in a Malaysian newspaper as saying the military received signals on Saturday that after the aircraft stopped communicating with ground controllers, it turned from heading northeast to heading west, lowered its altitude and flew hundreds of miles across Peninsular Malaysia and out over the Strait of Malacca before the tracking went blank.

According to the general’s account, the aircraft was near Pulau Perak, an island more than 100 miles off the western shore of the Malaysian peninsula, when the last sign of it was recorded at 2:40 a.m. Saturday.

Those are pretty specific points to all be backtracked as incorrect.

What airfields could this boeing have landed at?
edit on 12-3-2014 by Agit8dChop because: (no reason given)

The China government simply "arrest"/kidnap the engineers when they land in Beijing, easier

The Iranian is just MSM hashing the Iran hate.


Though I like the theory.
Vietnam somehow suddenly "back off" from giving out details.
China not as rescue, merely "observe", now with satellite,
USA not helping except finding "terrorist" yet using spy satellite to determine the whereabout, blaming Iran and a small team to assist.

All other participants seems genuinely OK, for now.
My theory now change, now its "A practical test of new technology and current ability to catch up",
what technology ? now that an interesting subject

ah yes, forgot, the plane will be found later, crashed of course, all died, blackbox will show electrical error.
Hey, its just a hypothesis
edit on 12-3-2014 by NullVoid because: (no reason given)

1. That it landed in southern China, Nanming Link

Malaysia Airlines had yet to confirm that the aircraft had crashed. It said earlier in the day that no distress signal had been given and cited early speculation that the plane may have landed in Nanming in southern China.

2. That it had crashed and Vietnam had detected the planes transponder signal Link

One Vietnamese rescue official announced the missing Malaysian plane's signal has been detected, according to the latest information released by Xinhua News Agency.

The official told local VNExpress that the aircraft's signal has been detected at some 120 nautical miles southwest of Vietnam's southernmost Ca Mau province.

posted on Mar, 12 2014 @ 01:24 AM
link
My uncle, who reads the Chinese news (for some reason I can't understand; he gets it translated), says that they are saying that they found the plane, and give supposed details about the recovery. If they are lying about it, then you may be onto something.


i like the way your mind works..
been tinkering with a similar theory
seeya in the car crash

posted on Mar, 12 2014 @ 01:54 AM
link
I've been listening to the local radio stations coverage of the scenario....and they kept saying, 'if it is terror, who claims it, it isn't terror if no one claims it.' As if that is the only literal crime left on the planet....I'm old enough to remember when planes where hijacked for MONEY....OMG....Yes, I said it, for ransom of money or some crazy requests......there was once a world without terror as a main political tactic, and as we old folks learned in the original Die Hard, sometimes the left is the distraction from the true intent.................keep the minds open......

posted on Mar, 12 2014 @ 02:09 AM
link
Is it a known that there were lots of Chinese software engineers on that plane? That's the assumption I have trouble with. I have read a few stories, certainly not all, but I didn't read anything about who specifically were on the planes other than the usual suspects, Iranians with stolen passports. You know, just to give the news something to squawk about...

This theory is predicated on the assumption that many of those particular people were on the plane. It's a good idea, and I think that if something nefarious was afoot, it could look quite like your theory describes.