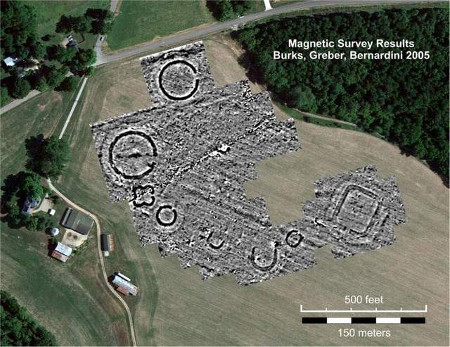 CHILLICOTHE — A week from Tuesday, a privately held Native American cultural site in Chillicothe will hit the auction block, and that has area conservancies and archeologists scrambling to find funding with which to purchase the site before it could be lost forever to potential development. The real estate being auctioned, located a few feet southeast of the intersection of Belleview Avenue and Plyley’s Lane, contains an ancient complex built by the people of the Hopewell Culture. Called the Junction Group, it’s one of the last of the privately held Hopewell earthwork complexes in Ohio that hasn’t been severed or destroyed by a road, railroad track or housing development. The earthworks are owned by descendants of the Stark family, who — with reluctance — now feel the need to sell the land they have farmed and protected for so long.

I found this story and link on a facebook page and found it rather sad. This is part of our early history and it deserves to be known about and studied. The fact that this site still exists is remarkable in and of its self, and the fools who want to pave this over need to be stopped and taught a lesson on the importance of the past.
I am hoping that ATS members can provide some better information on this area and, perhaps, its history as well.


Let's all pitch in and buy it, then we can have a genuine ATS archeological dig site of our very own! But you'll have to foot the Bill for this one, Springer. That's right, give Bill the foot, and buy this instead, haha.