page: 1
35
log in
join
share:
AlaskanDad
+16 more
posted on Feb, 27 2014 @ 10:34 PM
link
Interesting pictures that appear to be man made giant stone structures, I say appear because while many blocks look like shaped blocks it is not really possible to see specific structures. I would love to see some aerial views of the area, I did Google and found a youtube Mysterious megaliths of Gornaya Shoria it has some interesting images and some text at the beginning in Russian. 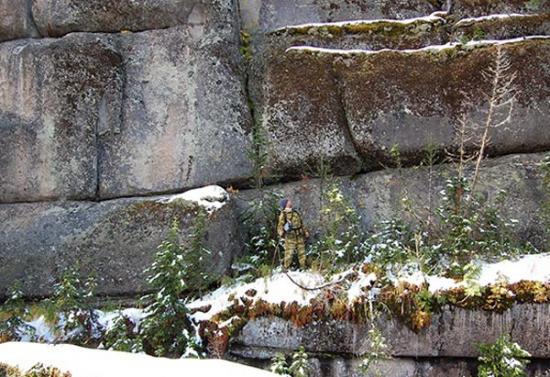 The super megaliths were found and photographed for the first time by Georgy Sidorov on a recent expedition to the Southern Siberian mountains. The following images are from Valery Uvarov's Russian website. 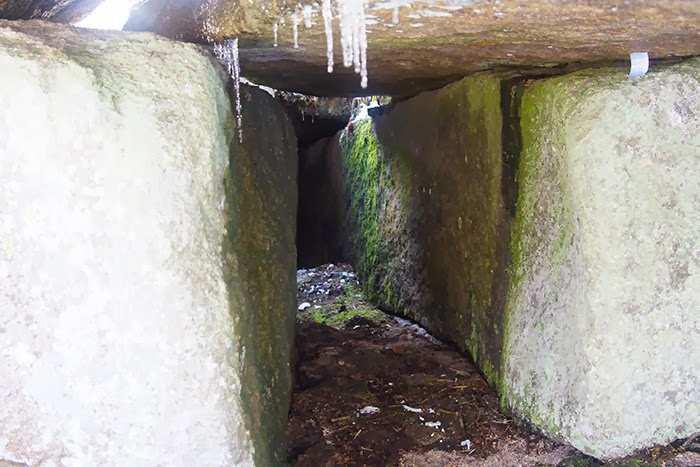 
I seem to read quite a few interesting stories about ancient Siberia, it is an area that I feel needs more exploring as well as further investigation.

At the Daily Grail they ask is this:

evidence for one of the greatest megalithic constructions ever discovered, or are they just a geological quirk of nature

I must say I feel it could be either.

If anyone has any more information on this site I would love to hear about it.

posted on Feb, 27 2014 @ 10:53 PM
link
Those are very big stones if placed by man but I tend to doubt it. It could be natural formations, mother nature can be confusing. I have seen other formations that are natural and look similar.

I would really need to see them close up or have a ton more photos to make my mind up.

posted on Feb, 28 2014 @ 01:00 AM
link
Here an interesting video about this Amazing discovery.
And "someone" has made a hole perfectly circular in the granite... 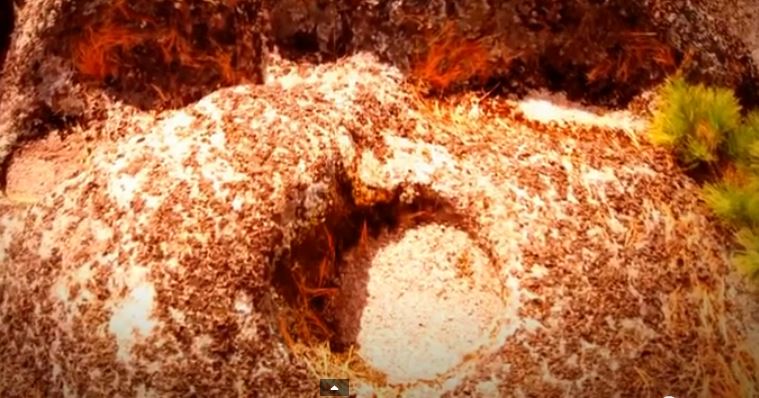 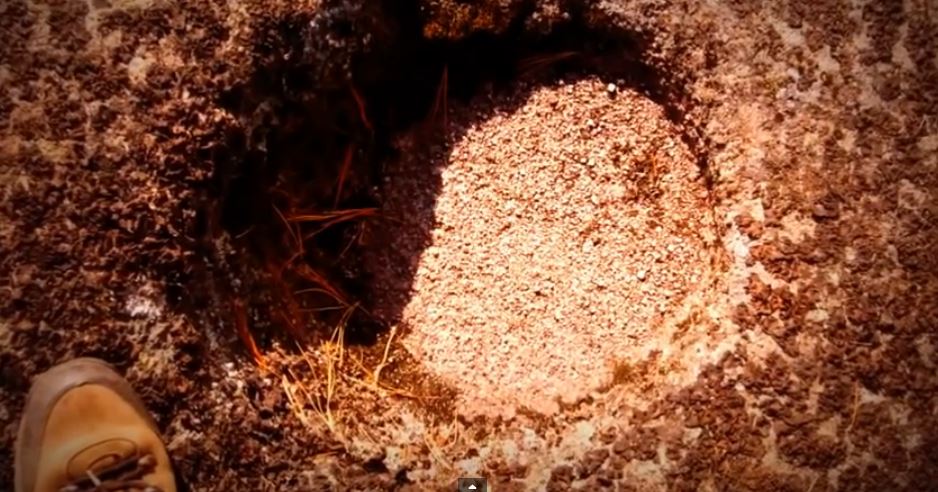 (above post beat me to it.) Anyhow, probably natural formations from the looks of it.
edit on 28-2-2014 by mrwiffler because: (no reason given)

posted on Feb, 28 2014 @ 02:43 AM
link
From the images in the video it seems like they are natural. Who knows, but there are similar natural formations pictured here:

posted on Feb, 28 2014 @ 05:43 AM
link
Now I am an armchair observer so can only give my feeling's and opinion, I Believe this site was of probably importance to at least one ancient culture whom may have used it for ritual and shamanistic purpose.
Among the very first images in the video there is a section of wall amid the linear block like formation's which has two large flat stone's placed into the gap meaning they are not part of the formation but were litterally placed there, this coupled with the indentation's show's the clear hand of ancient man so the site has been used extensively in the distant past.
IF this site were to turn out to be artificial in other way's then I would feel it's age would be more Geological than Human in term's of reference so this in itself makes it even more enigmatic though glacial weathering may mean over 35000 years and be inter ice age in origin, IF it is a mixture of natural and artifical as I feel it is a great lost cult site which need's extensive study and field research, indeed I would say it is important enough to the history of the human race in that part of the world that the russian's should establish a permanent site for study near by.

Even if natural this is Breathtaking and fascinating so thank you for sharing.

I feel it is a site of mixed natural and artifical origin's but it definitely need's more research, I wonder what around that site is under the millenia of dirt and weathering deposit's and how deep into the earth the stone's go, how many coursed down and if it was artificial how much of the site is visible and how much buried. The square straight sided corridor or passage can not be a natural water formed passage as it would be rounded and is too square though if the rock was split naturally site shift's and earth tremor's could have opened it up though it too may indicate artifact nature to the site.

When you hear people saying Natural artifact there is no such thing as Artifacts are produced by man or ARTIFicially and I regard the site as artifact, how much so though with such limited information.

posted on Feb, 28 2014 @ 07:50 AM
link
We have to entertain the possibility that these are naturally occurring formations. There are plenty of 'artificial' looking fractures that occur in nature.

Due to certain stresses, as well as the crystalline structure of minerals, seemingly "intelligent" formations and fractures occur in nature. Columnar joints are a great example of this.

posted on Feb, 28 2014 @ 09:42 AM
link
They're natural, they are referred to as the "Early Paleozoic Large Igneous Province of the Central Asia Mobile Belt" (source)

I believe it is related to volcanic activity in the ancient past, I keep seeing references to it with terms like "magmatic granitoids", and large magmatic formations interspersed with periods of sedimentary activity, with the erosion of the sediment layers, you have the igneous layers breaking down. These layers are also highly magnetic.

Interplay of magmatism, sedimentation, and collision processes in the Siberian craton and the flanking orogens

posted on Feb, 28 2014 @ 11:07 AM
link
Many thanks to users Arken and mrwiffler for adding the working link to the video, I am kind of new to posting here and messed up on posting the youtube link.

While I know the odds are in favor of the site being natural formation, I did see a few things that I felt warranted further investigation and left me wondering.

Siberia has a lot of strange folk lore and some sites of interest, I wonder what if any of these will have archaeological significance or if all are just natural formations. 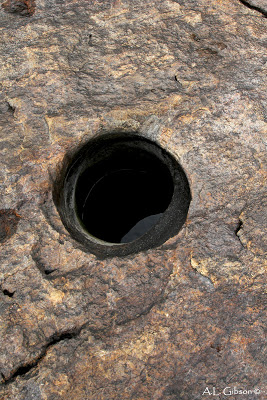 Naturally-worn holes in the granite

Not sure, I have seen rocks and holes like these in the rocky mountains. Is this area anywhere near the ancient cauldron site I wonder.
floraofohio.blogspot.com...


I wonder if the Structures are related to the Metal Cauldrons found in Siberia?(Allegedly according to some people it is in fact an ancient alien weapon)

Boulders cracked at different angles and moved along via an ice field from an ice age, coming to rest on another outcropping, also split from freezing and thawing. The stones appear staked after the ice recedes. The whole effect is smoothed over by thousands of years of weathering.

I believe standing pools of water can leave "dips" in certain types of rock over time.

Also if giants stacked the rocks, the 'hallways' they produced aren't quite tall enough for a standard human.


One of the least explored places on the planet. It is vast and has many treasures i am sure. I remember several shows i watched on some of great things found there. One of my favorites was about the metal bell shaped objects, that one scientist had found. When they went back they had sunk into the permafrost and radiation levels were high. Several on the trek got very ill.

Lots of great myths about this vast area. It is also one of the few places you can still find tigers in the wild. Should be preserved. Very large wild place.

I would just say this, don't discount that it could not be man made. There are fantastic things all over the world that seem impossible. One of my favorites is this hidden underground city in Turkey www.goreme.com...

It is another one of those no way they did that places lol...


Can you source that it is granite? It looks too porous, like sandstone or limestone. Limestone is very common in Siberia.


Yup. Siberia had flood basalt events at the end of the permian era. "The Siberian Traps"

Imagine: 1 millions years of basaltic magma flow over an area the size of Europe.


I wonder when our academics who like to dominate all knowledge will own to the fact that we have a lot to learn about what they term 'pre history'. Its not pre-history at all, its all history but pre-history gets my goat every time because its academia not accepting the newer archaeology and making their 'flock' follow the traditional ideas. We have a lot to learn about the megalith builders and their culture because it could be that it dominated the entire world and was 'pre-Tower of Babel' time.

we take advantage of the natural lay of the land as best we can for shamanistic purposes
like the natural hole in the rock on the family island where the waves would wash through and generations of my family would wash the cloth diapers in
the original hoover washer....