posted on Feb, 26 2014 @ 12:13 PM
link
This is probably one of the most famous bigfoot accounts ever told. It happened in 1924! The account is so amazing and makes one wonder if
it could really be true. I don't know myself, but, it's one hell of a tell!!

" "In 1924, Fred Beck and three other miners say they were attacked by “apemen” at their mine claim on Mt. St. Helens. The creatures pelted the miners’ cabin with rocks, climbed on the roof, and tried to break through the door. The attack lasted all night. Previously, the men had seen unusual large footprints in the area, and Beck, with another man, had shot at an odd creatures they saw at about 100 yards, and then at 200 yards, taking a total of six shots. It appears the attack on the miners was likely in revenge...possibly one of the shots had found its mark. When the men emerged from the cabin in the morning, Beck saw one of the creatures at about 80 yards away near the edge of what is now Ape Canyon. He took a shot and and the creature toppled into the canyon. The group hastily left the area. Beck and one of the men, Roy Smith later returned with newspaper people and investigators." quote and source from article at bigfootevidence.blogspot.com...

Greg Moorhead, a bigfoot researcher from Texas, posted these amazing photos surrounding the story of "Ape Canyon" and a man named Fred Beck. Check them out: 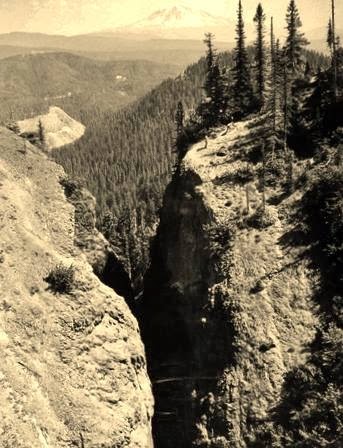 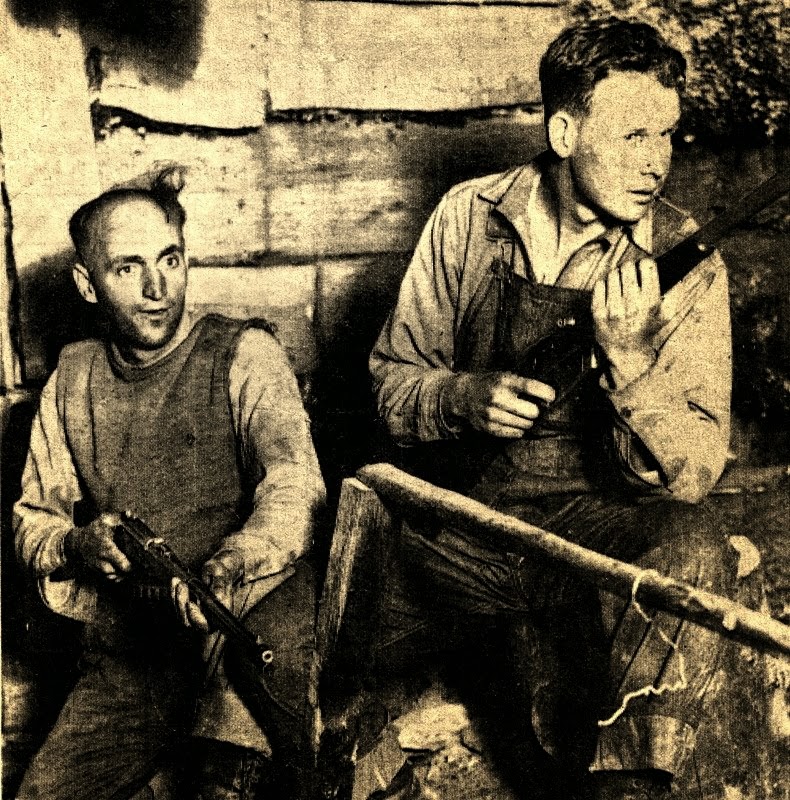 Newspaper photo showing the investigators standing by the besieged cabin. From left to right: Burt Hammerstrom, free-lance writer; Bill Welch, forest guard at the Spirit Lake Ranger Station; Frank (Slim) Lynch, Seattle newsman; and Jim Huffman, forest ranger for the Spirit Lake district. Footprints were found, but photographs have not come to light if they were taken. 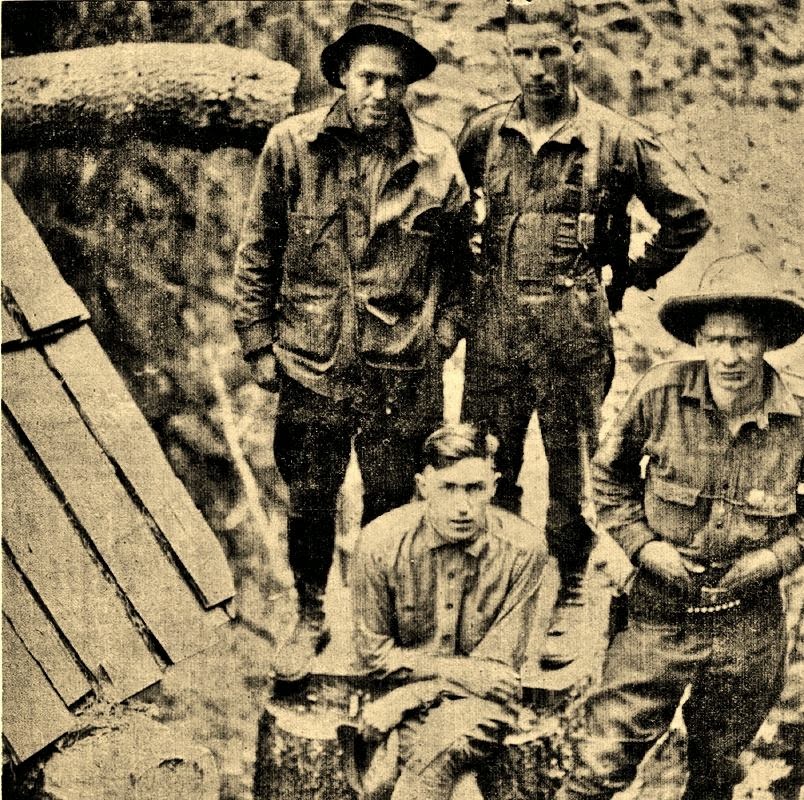 all photo's and written article is sourced from "Bigfoot Evidence" bigfootevidence.blogspot.com...

below is a You tube video I found:


Shawn from bigfootevidence.blogspot.ca... reports:
During one evening In 1924, a group of miners shot at a mysterious 7-foot-tall apelike creature that was milling around the makeshift cabin they had built in the canyon to assay a nearby claim. That night, as the miners tried to get some shut-eye, their cabin was reportedly pelted with rocks, logs and other forest debris by a band of at least three of the "Big Foot" ape creatures—the miners later measured footprints at up to 19 inches long. In the morning, the story goes, the miners came upon and shot one of the ape creatures, which fell some 400 feet into the canyon, presumably to a certain death, although no remains of any kind were ever recovered. It was understood that the cabin was burnt to the ground around 1968 and the exact location of the claim was thought to be lost forever.

But according to information being gathered by a group of people seeking to preserve the famous site, they may have found the cabin -- at least what's left of it. A person named Marc of the Dark Waters Paranormal Group sent this exciting email to us today:

July 2, 2013 2:30 pm, on second day of 3 day expidition. 1924 Ape Canyon cabin site rediscovered. Its been a long haul, but I found it, No surface evidence left, but a good start on sub-surface evidence. Mine entrance not found. That's for next time.


For the past 4 years, the Dark Waters Paranormal Group has been collecting important documentary evidence leading them to the exact location of the cabin. Based on the evidence the group have gathered, they believe they've finally found the cabin. According to Marc, the area is an alpine forest, and the dangerously rugged terrain makes it very difficult to get to. This is perhaps why the cabin was presumed lost." source quoted is from www.youtube.com...


More information (of course) can be found here:
I FOUGHT THE APEMEN OF MOUNT ST. HELENS, WA.

What are Abominable Snowmen? Fred Beck is qualified to tell what they are. He was one of a party of five miners attacked by them in 1924, the most famous of such incidents in North America. The incident has become a legend in the Northwest. He tells the real facts after 43 years of silence.

If you go to that link above you can read the whole account !!

You can read the complete interview!! Example from interview:

"Question: "Do you think the 'blasting' had anything to do with them attacking you?"
Answer: "No, but it made them curious. Our mistake was shooting them."
Question: "Could you explain what you mean by search for consciouness? Aren't they conscious of something?" "

so, what do you all think??? Did this really happen??

At one of Ray Crowe's Western Bigfoot Meetings, someone brought up the topic of corpses of sasquatches after the May 18, 1980 eruption of Mt. St. Helens in Washington State. The witness heard of two sasquatches the Army Corps of Engineers had taken out of the volcanic devistation, this was two months after the inital blast.

Terry Reams heard of a dredging operation of the Cowlitz River and two bodies were found in the sand (probably same case?). A chopper flew them off.

Joe Beelart offered that the crane doing the dredging was from the Manatowaka Company and that the bodies were found two weeks after the Mt. St. Helen's blast of May 18, 1980. He suggested that somebody might want to track down the company and find out who was working the shift that the bodies had been found on.

During a tour of the devastation by helicopter in 1985, the Viet veteran helo pilot mentioned a similar tale to Bobbie Short saying there were military helos that choppered out nets full of burned and semi burned elk, deer, bear and something with hairy charred arms hanging out of the drop nets. They were taken to a common pit where the bodies were burned to avoid disease and contamination of the rivers. (it might be the same story as above) " all the above I quotes is sourced from www.bigfootencounters.com...

which can had here: The Track Record www.nabigfootsearch.com... for those that want very old accounts and such.

posted on Feb, 27 2014 @ 01:32 PM
link
Pretty interesting, but the first thing I thought of was, what a good way to scare somebody off their claim so you can take it over...Id like to know what happened after this...did they decide to get rid of it and go someplace else? I know back then it was law that you had to work a claim and be there x amount or lose it. Just something else to consider.

Wiz4769
Pretty interesting, but the first thing I thought of was, what a good way to scare somebody off their claim so you can take it over...Id like to know what happened after this...did they decide to get rid of it and go someplace else? I know back then it was law that you had to work a claim and be there x amount or lose it. Just something else to consider.

That's interesting. I did not know that. Good point to bring up!!


The crane company is; "The Manitowoc Company Inc"

I have ties but no information, yet.

posted on Mar, 7 2014 @ 11:05 AM
link
I first took Bigfoot seriously in my Uni days when certain anthropologists stated to me, on the down low, that they indeed existed and were more human than ape... and were an indigenous people (or close cousin to homo sapiens) who happened to be hairy, huge and reclusive. They said many folks know about them and the consensus was that they want to be left alone, so they are. They had many stories about finding traces and a few grad students/profs told me they had seen them up close in the Pacific Northwest and Rocky Mountains. It blew me away and I remain skeptical, but far more open to the idea that they truly exist, because one of the Dr.s who relayed that info was not credulous or loony.

Though the T.A. who ate mushrooms and spoke to a Bigfoot was a lot less compelling, heh... but who knows?

They had a drawer in the anthro basement with tracks, hair and scat samples taken by Uni personnel who ran across them when out in the boonies. They didn't advertise because of the giggle factor and the understood "hands off" policy. They wondered if the gov had the same approach...i.e. knowing they exist but since they didn't usually bother anybody, were rare and wanted to be left alone (and couldn't pay taxes) they were left to their own devices.

It's not as "out there" as many fringe topics... and many other fringe topics have more than a little truth to them.

Some of the evidence is good and so are some of the witnesses. The tracks found with proper morphology and dermal ridges is pretty compelling evidence. One that sticks in my mind is the set of matching prints found hundreds of miles apart in the middle of nowhere by different people. I know hoaxers can be very creative and motivated, but there's a tipping point where the evidence just makes one admit that an unknown giant hominid is a real possibility. The other hominids found lately just add to the argument in favor of them.

Again, some of the witnesses are darned convincing. Discounting so many people's considered observations just gets ridiculous after a while.

The Ape Canyon episode is a good yarn... and if true, then I am a little sad the creatures didn't eradicate the gun happy yokels shooting at the hairy people. It does point to Bigfeet being rather pacifistic, though, as several hundred pounds of enraged muscle wouldn't find a ramshackle cabin much of a barrier if they really wanted to hurt the miners.

So, it's weird that we share our planet with different kinds of humans ... or hominids... but it seems likely we do. We did in the past, though, and if Bigfoot, or Sasquatch, ends up as a known then I won't be too flabbergasted... many relatively sane people are already convinced and have been for a long time.