Evidence Of A Galactic Collision 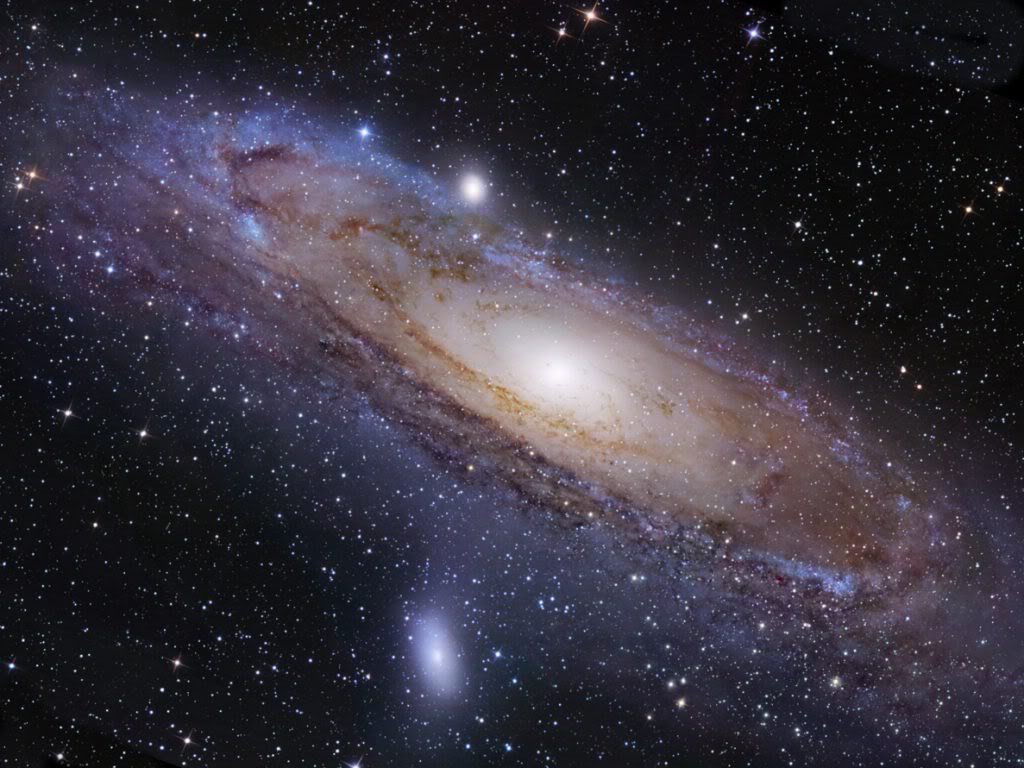 Here is some new information just published in "Nature", about our closest galaxy Andromeda. Lots of bumping around has been going on way out here in our galactic neighborhood!


Andromeda is the closest spiral galaxy to our Milky Way, located around 2.4 million light years away in the constellation Andromeda. It is surrounded by over two dozen satellite galaxies, one of which is a dwarf spheroidal galaxy named Andromeda II, which is less than one percent of the size of the Milky Way. - See more at: www.iflscience.com...


Dwarf satellite galaxies are thought to be remnants of the material that came together to form the giant galaxies they surround. While it makes sense that a disk of such dwarfs might emerge early after they formed, after a few orbits these dwarfs should veer off and live relatively independently, dispersing the disk in the process.


"Mystery" : This is related to other studies that are being pondered about our own "milky way galaxy"


Yeah that is far, but in about 4 billion years, it won't be so far away. Cool thread though. I love studying deep space.


Yeah!! Me too!! Cool mind blowing space!! I added the link to NATURE article above just now... has the full info!! Thanks!!

en.wikipedia.org
The Andromeda Galaxy is a spiral galaxy approximately 2.5 million light-years from Earth in the …


The Andromeda Galaxy, also known as M31 or as the Great Spiral Galaxy[1], is one of the most distant objects that the unaided human eye can see; it lies over 2.2 to 3 million light years away.[2] Locating it the first time is a little tricky, but once you find it, it's hard to ever lose it again.
Note: The best time for finding the Andromeda galaxy is between August through late March, so if you're experiencing difficulties locating it, bookmark this page and try again later. Also, be aware that this is easier to find from the northern hemisphere than from the southern hemisphere.

I remember when you could see it with your naked eye. (when I was a kid at camp in Califorina)


Personally, I find it mind blowing that it is ONLY 2.4 million light years away. Just think about all of the stars and potential planets is both the Milky Way and the Andromeda galaxies...

...and then consider that the Milky Way and Andromeda are just a "tiny tiny tiny" portion of the known universe.

There could be (and almost surely is) intelligent life in some distant galaxy 5 billion light years away who may not even know the Milky way and Andromeda galaxies exist -- or if they do know, we are just two anonymous run-of-the-mill galaxies lost among the billions they know about.


RUFFREADY
How to Find the Andromeda Galaxy
www.wikihow.com...

I remember when you could see it with your naked eye. (when I was a kid at camp in Califorina)


I can still see it with my naked eye on clear moonless nights (I live about 5 miles from a small-to-medium-sized city, but the area of the sky that Andromeda is in is sometimes in the other direction away from the city lights, so the sky is much darker in that direction).

For example, I was out with my dog (doing his "business" for the last time of the night ) a few weeks or so ago, looking up at the stars and noticing Cassiopeia, and I decided to pass the time waiting for my dog by finding Andromeda, as I have done other times in the past (or I just stargaze in general). I know where it is, so I can usually spot it if there is no Moon and the air is dry/clean.

I do find, however, that it is somehow easier to see if I am not looking directly at it, but rather a bit to the side. If I look slightly away, but keep that area in my field of view, I can see Andromeda as a small and dim blurry blob. However, when I try to look directly at it, I find it is almost impossible to see.


Yes, that's how I find it where I live. Using Cassiopeia, but with Binoculars. It looks like a dim cotton ball (not perfectly round). It's so
crazy when looking at it, I'm thinking jeezz that thing is over 2 million lys away...

I've also seen it through 8" to 14" telescopes when in astronomy II while in college., and other galaxies and clusters etc..
when I lived in California up in the mountains) pretty awesome.
edit on 26-2-2014 by RUFFREADY because: goof

Soylent Green Is People
I do find, however, that it is somehow easier to see if I am not looking directly at it, but rather a bit to the side. If I look slightly away, but keep that area in my field of view, I can see Andromeda as a small and dim blurry blob. However, when I try to look directly at it, I find it is almost impossible to see.