Intoxicated woman used as a sex slave by Chief of Police. 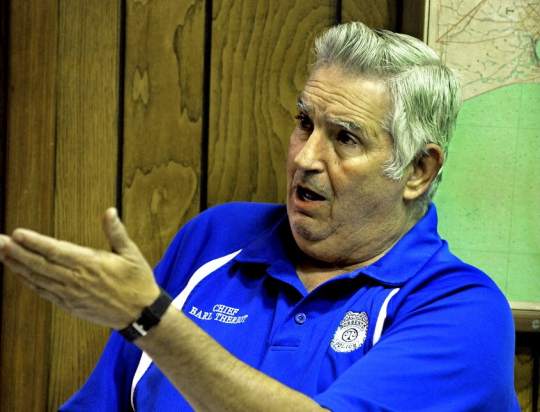 So heres a summary.

Someone from a grocery store called 911 because a woman was "drunken and nonresponsive". For all they know, she could have been on meds.

The Chief of Police responds to the call and does what any decent human being would do, buy her MORE alcohol then kidnap and sexually assault her.

The suit also claims that before the forced oral sex occurred, Theriot had her handcuffed and restrained with her own belt under his desk while Theriot met with Mayor Mike Lambert in another part of his office.


So he basically kidnaps her and uses her as a sex slave...

While Theriot spoke with the mayor, the woman found Theriot’s cellphone and called her boyfriend, saying she was being held against her will.

The boyfriend headed to the Police Department but was told by then Officer Lyndell Aguillard that the woman was all right. Theriot held the woman between 1 p.m. and 5 p.m. Nov. 1 and forced her to give him oral sex at various points, the suit alleges.

Theriot handed the woman over to her boyfriend at 5 p.m. Nov. 1, giving him her belt and a partially consumed bottle of vodka.

Her pants were unbuttoned and unzipped. She was still drunk and incoherent, having to be held up by her boyfriend, the suit alleges.


When the boyfriend came to her rescue, he was stopped by yet ANOTHER cop...

One might argue that the 2nd cop didnt know what was going on. Then why did he claim that she was ok? Just whatever?

What do you do when the cops are the criminals???

No really, what was the boyfriend supposed to do? Round up a posse and storm the g-damn police station?

What if this was your wife, daughter, mother, girlfriend...

posted on Feb, 22 2014 @ 11:19 AM
link
Restrain them with belts in a prison's common area and let the ensuing prison justice suffice. The worthless "upholder of the law" and his sorry lapdog who covered deserve nothing less.


Indeed, I would dearly like to talk with a few of them and find out what their thoughts are as well.

At this point, I see police as nothing more than an armed para military force. I certainly don't trust them with my safety, or that of my family. There are FAR too many stories like this EVERY day. The police disgust me. That means all of you. If you are unwilling or unable to police your own...then you are unfit to serve. You all seem to forget that you derive your police powers from the people that you are supposed to be serving. Uhggggggg....I'm gonna stop now before I start ranting.


Disgusting, this kind of thing really turns my stomach, the despair and helplessness felt by the women and the boyfriend must of been awful and the police wonder why we show them no respect anymore! they can look on there own doorstep for that answer.

I did some googling and discovered there have been 6 lawsuits against this police department since he became Chief in 2001.

All 6 cases were settled out our court by their liability insurer, which dropped the departments coverage in November 2013.

One of the cases involved a female officer who claimed she received an obscene text message from the Chief. Sounds like he is a habitual, classless jerk.
source

Here is another look at the insurance problem.
another link

They will say what they always say....

"We need more investigation as to the facts in this case" and try to steer the thread into another area.

This POS deserves a lengthy sentence, where hopefully he spends his remaining moments on this Earth...

The entrance exam for police needs to be much more difficult to pass, just allowing any idiot to have a gun and a badge is beyond me. So, we take folks who typically aren't smart enough to go to college and we give them a weapon, badge and endless power... Sounds like a recipe for success... There is no surprise to why we see cop incidents reported practically every week, it's because they are too dumb to get away with the crimes they're committing on the people they're supposed to be protecting...

Why even the BS circus of a trial.

Kidnap and rape, yep dont need this guy around.

And for the sympathizers;

Tell it to someone who cares, deaf ears here.


I'm a long time reader of Above Top Secret, but I'm a lurker, all I do is read and lurk---but I have to comment on this.

I live in this town and I know this man, and I have to say I find these allegations impossible to believe. There's alot more going on here than you realise. This all came about because of a feud between the Chief of Police (Earl Theriot) and the Mayor (Mike Lambert). The town council of this little podunk town was trying to shut down the police department by making it impossible to get the department insured--so all the cops (three or four officers) were laid off, but the Chief (Earl Theriot) is an elected official and the town couldn't fire him or get rid of him and he refused to resign. He was trying to get alternative insurance to keep his department open, but the town council just wanted to get rid of him and kept insisting he resign. Back and forth with this for awhile, and then this comes up, forcing him to resign. I really think the timing of all of this is fishy. Everybody thinks so around here. Sorrento Louisiana is a really tiny place, only about 1500 people so everybody knows everybody and everybody knows Earl.

I'm sure there's more going on behind the scenes than we know, but I just wanted to say I read stories all the time about rotten crooked cops that abuse power and all that, but this isn't one of those things.

Like I said, I have never replied to a post online before in my life, so I hope I'm doing all this right! I will now go back to lurkermode!

Thanks for listening,
Catherine


If your town is as small as you say, wouldn't it be pretty easy to verify whether the Chief purchased a bottle of vodka on duty at the time he picked the victim up? I would start there with the story... If it is confirmed he bought liquor on duty, then I'm sure there was some questionable things going on...

posted on Feb, 22 2014 @ 03:36 PM
link
I have to say threads like this really point to the hypocrisy of ATS. Whenever an LEO abuses their power members use it as an excuse to condemn all LEOs. Yet whenever we have posts regarding gun violence members are quick to point out that this was an act committed by a single gun owner. Now I'm not defending the alleged actions of this Chief. If he did what was claimed then he deserves to be strung up. However, if you want to use him as an example for all LEOs then you should also use someone like Charles Whitman as an example for all Gun owners.

Xcalibur254
I have to say threads like this really point to the hypocrisy of ATS. Whenever an LEO abuses their power members use it as an excuse to condemn all LEOs. Yet whenever we have posts regarding gun violence members are quick to point out that this was an act committed by a single gun owner. Now I'm not defending the alleged actions of this Chief. If he did what was claimed then he deserves to be strung up. However, if you want to use him as an example for all LEOs then you should also use someone like Charles Whitman as an example for all Gun owners.

The fact that you are unable to differentiate between the two is troubling.

Gun owners are not a group of people. They are normal people, anybody.

Police are a group of uniformed people under a common rule and set of laws and practices. The government funds and defends them. WE fund them, actually.

A person working as an agent of the government should have their power and rights restricted as much as possible, unless good evidence is proven as to why they need to be granted a power.

A normal civilian should have their power and rights respected as much as possible, unless good evidence is proven as to why those rights should be removed.

THAT is the difference. A cop is NOT a normal person wandering the streets. They are an agent of the government, are required to follow a strict set of rules.

Citizens should be given the benefit of the doubt, officials should be assumed guilty and forced to prove innocence. That is the only way to keep those with power honest and accountable to the people.


The difference would that other gun owners don't try to cover up for the criminal gun owner.

I have yet to see a cop arrest another even when they know full well what is going on is illegal.

BIG difference and if you can't see it, you may just qualify for the lower IQ'd PD.


you are right, it will get swept under the rug, due to the fact of his stature in the police division. someone will find a way to cover it up and he will get off scot free. or he will get a slap on the wrist because of his stature. isn't it great how as long as you have a badge you can do anything and get away with it


The difference would that other gun owners don't try to cover up for the criminal gun owner.

Have you been on a thread about Holmes or Newtown? From the majority of posts on ATS it looks like gun owners either believe these people were patsies or MKUltra victims. How is that not an attempt to defend the actions of these murderers?


So basically you are lumping all ATS gun owners.

Something that you just condemned. HMMM.....