page: 1
46
<<   2  3 >>
log in
join
share:
FortAnthem
+12 more
posted on Feb, 20 2014 @ 10:13 PM
link
As if all the snow dumped on our region lately wasn't enough, the weird weather just keeps on coming in. Now, we're being hit by super thunder which shattered windows in a Philly neighborhood and made residents think a bomb had been dropped.

Police and Peco responded to the 500 block of Hermit Street in Philadelphia's Roxborough section after many people reported that they saw, heard, and felt an enormous release of energy.

It was around 10:15 a.m. when the witnesses say they first saw a flash then heard an explosion.

Anthony Amadio was sitting at his kitchen table when two windows blew in, cutting his head. In all, more than a dozen of his windows were shattered.

Amadio tells us, "I was in Vietnam in 1969, and it was about like that. I thought I was hit with a rocket& that's how intense the explosion from whatever it was - the lightning, the tree, or the transformer  I'm not sure."

This resulted in dozens of houses having shattered windows letting in the cold in this bitter winter we've been having. Like losing power for most of a week earlier wasn't enough, now we have this. I hope those folks have good homeowner's insurance and are able to get those windows fixed ASAP. I just hope their insurance doesn't chalk it up to an "act of God" and leave them hanging.

Another station explained the reason the thunder was so powerful. Its because of the weird weather we've been having amplifying the sound.


Loud Thunder: What Does It Mean?

You can see how those storms lit up Ultimate Doppler Radar this morning. The sound was a direct result of all this action in our atmosphere.

Most thunderstorms form from surface heating, warm air at the surface and cold air aloft. This allows any thunder heard to dissipate faster and in all directions. Sound waves usually move faster in warm air and slower in cold air. This morning the region experienced a temperature inversion. This is simply cold air trapped at the surface and warm air aloft.

Thunderstorms formed aloft along a warm front in this inversion this morning called elevated thunderstorms. The cold air trapped and amplified the sound waves increasing the intensities heard across the region.

Its bad enough we're getting buried and traffic is a mess from the weather we've been having but now, we have to worry about our windows being blown to bits by thunder in this crazy weather.

posted on Feb, 20 2014 @ 10:30 PM
link
I have been in my house and thought the thunder would blow the windows out, along with my eardrums. Before we had the windows replaced there were a few times you could hear them rattling in their panes... but never have they actually blown out.

Just wow! Wouldn't that scare the crap out of you? Mother Nature never ceases to let us know that she is a force to be reckoned with.

posted on Feb, 20 2014 @ 10:32 PM
link
Wow. That is crazy. Do you all have a name for it yet? In the last few years in Chicago we've added ThunderSnow and Polar Vortex to our regular vocabulary. Maybe Sonic Thunder? ThunderBoom?

Has this happened before there or in other places? I started looking a bit and didn't see any other examples of windows actually being blown out by thunder.

nugget1
+1 more
posted on Feb, 20 2014 @ 10:37 PM
link
I had no idea thunder was capable of causing something like this!
Are there any similar occurrences in the past to refer to?

Does anybody else get the eerie feeling that something very strange is happening on our planet?
Maybe I should put my imagination on 'pause' for awhile. Strange sky 'booms'; strange earth 'booms'; strange 'earth lights'; window-breaking thunder; 'burning' snow......I felt safer when it was just Yeti and chupacabra out there!


As far as I know, this is the only report I've ever heard of this happening. They say its because of the freaky weather we've been having trapping the cold air near the surface during the thunder storm made the thunder extra powerful.

I didn't hear any of it where I live but, I've been hearing people talk about it all day. They say it was truly terrifying. It must've sounded like the area was being bombed. A regular thunderstorm can be scary enough, I can only imagine!

nugget1
I had no idea thunder was capable of causing something like this!
Are there any similar occurrences in the past to refer to?

Does anybody else get the eerie feeling that something very strange is happening on our planet?
Maybe I should put my imagination on 'pause' for awhile. Strange sky 'booms'; strange earth 'booms'; strange 'earth lights'; window-breaking thunder; 'burning' snow......I felt safer when it was just Yeti and chupacabra out there!

I would consider it strange or impossible if I had not experienced it to the point that it felt like my eardrums would implode. I have only experienced that sensation maybe 4 times in my 37 years. I imagine that it wouldn't take much more than that to blow a few windows out. When that has happened, it has always been almost like a spontaneous burst of thunder seemingly out of nowhere usually when you think the storm has moved on. All 4 times it scared the heck out of me, and I don't scare easily. You could feel it all around you. Through the walls, through the floor, etc. just a different feeling than an average "boom".

I do have to add though, that I do believe the weather is getting more extreme lately. It is a little scary because it is something out of your control.

posted on Feb, 20 2014 @ 10:52 PM
link
As more and more strange 'phenomenon' keeps occurring, I can't help but think that SOMEBODY in the scientific community has a hypothesis, or a least an idea or two. The fact that nothing is being said speaks louder than any words ever could.
Whatever is causing these earth changes seems to be accelerating.

Silence because it's man-made? Or,something that we have no control over?
My instinct tells me that there are those who know full well what is going on.
My ATS radar wants to know why it's being kept from all of us.

Kangaruex4Ewe
I have been in my house and thought the thunder would blow the windows out, along with my eardrums. Before we had the windows replaced there were a few times you could hear them rattling in their panes... but never have they actually blown out.

Just wow! Wouldn't that scare the crap out of you? Mother Nature never ceases to let us know that she is a force to be reckoned with.


I've heard thunder so loud that my ears rang afterward, and I've also seen it crack windows before. I live in FL, so this is pretty normal for our summer storms, though. The cracked windows were older & thinner than more modern windows in newer buildings, so if it blew out windows in Phili, I'm wondering exactly how old those windows were. Plus, they were stressed from the cold. When glass is cold, it's more brittle. Keeping that in mind, a lightning strike immediately nearby with thunder + winter cold = impromptu breeze.

I actually expect a storm to blast out our windows eventually with thunder, ours are older & quite thin. All it will take is a strike in the parking lot and buh-bye windows.

How odd! I've had lightning strike several times over the years only tens of feet from my house, but without such damage. I wonder if the temperature caused the windows to be more susceptible to thunder? More brittle from cold, perhaps?

Alternatively, as a temperature inversion is mentioned, perhaps there was a small heat burst? Those can do damage like straight line winds - it's a very rare and weird weather phenomenon.

I'm trying to imagine how my dog would deal with thunder powerful enough to break windows. There's not a bathtub deep enough for her to hide in.


It happened at my old highschool years ago. Some super bolt shattered out some serious windows above the lockers and fell on some kids. It's not real rare. Your parts of the country are just not used to how crazy the weather can actually be. A close lightning ground strike is going to sound like the sky is falling on your head. It's awesome!


I think it's been thundering here lately. Can't tell what it is. A rumbling sound I'm attributing to the trains or equipment at the mill nearby. If they're working at night.

posted on Feb, 20 2014 @ 11:55 PM
link
Lightning hit our farm house when I was a kid and it was an experience like no other. I swear I saw sparks dance off the curtain rod in the living room. Time seemed to slowed down as my brothers looked up at the ceiling that was lit up from the windows awash in a nuclear bright light. The air had a distinct smell that I only recognized later in life as ozone. The old lightning rod on top the roof took the hit and held, but a pine tree in the yard got hit from an arc off the rod that split the top. My ears rang for hours after. Now the windows vibrated something fierce but surprisingly held for such an old house. 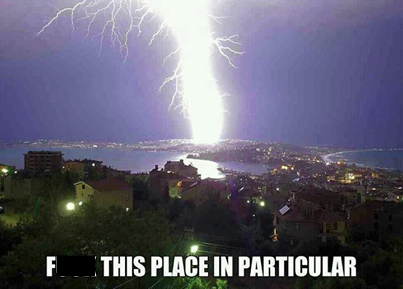 Nature will KILL you.

Just wow! Wouldn't that scare the crap out of you?

I would definitely have to use the litter box after something like that.

We had a day last year where the thunder claps were insanely loud. I'm not particularly jumpy but man did I flinch when the first one went off. I've never heard anything like it. Seattle doesn't really get much thunder though so maybe I'm just a wuss. I would have been less startled if a gunshot had gone off outside though, it was a very eery sound.

posted on Feb, 21 2014 @ 01:52 AM
link
Several years ago I was outside in a drizzle watching an approaching storm and there was a deafening boom of thunder. You could feel the concussion. I have experienced some very close lightning before (100 yards or so a few times on the ground, and a strike in air). This was at least as loud and "heavier" though the strike was several miles away. Our friendly met office told me I had witnessed a "superbolt" and was somewhat piqued he had missed it. Made the news locally (blown out windows, reports of possible explosion, etc)
edit on 21-2-2014 by _Del_ because: (no reason given)

posted on Feb, 21 2014 @ 01:55 AM
link
Sound waves are effected by the landscape
If you are in a spot where the two sides of the sound wave re-enforce each other instead of cancelling each other out because they are equal and opposite.
Also a sound wave travelling into a hollow cone type shape gets focused


Incredible! I have had thunder rattle the house and cups in the cupboard in the past, a number of people must have lost a couple of years off their life experiencing this! S&F.