posted on Feb, 20 2014 @ 03:26 PM
link
I moved back to my hometown area in July 2013 after being away for 25 years....Man I forgot how good some of the local food is here in Western Kentucky. BBQ is huge in this area, with mutton being the local forte. Some sliced mutton on a hamburger bun with a slab of sliced onion and sweet pickles just can't be beat. yummy.

Every second weekend in May is the International BBQ Festival where they block off the first few streets down by the Ohio river in Owensboro and have massive bbq cooking contests..... it smells so good that you can gain 10 pounds just walking by the bbq pits.

Burgoo has to be my all time favorite... a soup made out of bbq'd sheep that is so tasty.

This is a link to the local heavy weight in the BBQ business.... Presidents have eaten there and they have catered to the Whitehouse. You can order online and if you have never had burgoo, this place has the best hands down.

Around Owensboro, in western Kentucky, many of the early settlers came from the sheep-clad hills of Wales. Today, the area is the stronghold — surely the only one in Christendom — of mutton barbecue, served sliced or chopped with the customary tomato-based sauce. As Patrick Bosley of the Moonlite Bar-B-Q Inn, which sells 10,000 pounds of the stuff a week, explained to Krista Reese of the Southern Foodways Alliance, cooking the mutton over gently glowing hickory coals for 12 hours "tenderizes the meat and tames its wilder flavors, while retaining its unmistakably gutsy taste."


Burgoo? Never heard of it?


If you live near the Owensboro, Ky. area, you should really make an attempt to attend the International BBQ festival!


Your culinary senses will thank you!

Now that is where I live. If you want to talk about my hometown of Pittsburgh, well that is food mecca. You can't get away without mentioning Primanti Bros.


Here in the West Midlands UK we have several local delicacies , most notably ...
Faggots and Peas

Or perhaps the slightly less tasty but equally notable ...
Grey Peas and Bacon

And no it doesn't taste better than it looks , simple food for simple folk

Its a sugar coated deepfried pastry.


have eaten many a Beaver Tail™ but have never tried to make something similar at home. Until now. And I’m wondering what took me so long! For the uninitiated, Beaver Tails™ are sort of like an oblong-shaped, flat donut. Basically fried dough. Beyond that, they can be topped with sugar, icing, chocolate, jam, pie filling, cinnamon or just about any other topping

I have never eaten one as i don't eat sugar but when Obama came to town and they made the Obamatail...I am sure now i NEVER will.
Stupid ass kissing dummies.

Another one from up here in the north is poutine.
en.wikipedia.org...

I only eat poutine once a year (too fattening) and usually with smoked meat and onions added. 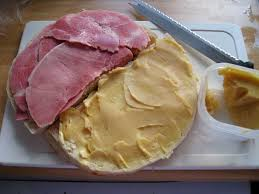 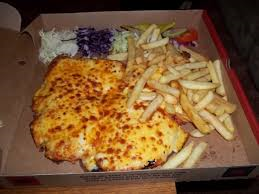 posted on Feb, 21 2014 @ 02:55 AM
link
Santa Maria (Calif) Style BBQ here! Beef tri-tip bbq'd over oak coals. Served (old school style) with pinquito beans, tossed green salad, and garlic French bread, also grilled over the oak. Salsa condiment to cover the meat. Can be subbed with chicken but oak wood is key.
edit on 21-2-2014 by missvicky because: (no reason given)

Very fun thread! My daughter incorporates oysters into her BBQ's and a perfectly grilled lobster is heaven. It's my fav way to eat lobster but very few can grill it perfectly. The traditional Santa Maria BBQ is nearly faded out with tri tips having become so expensive. It's interesting to me how the younger generation adapts...but like I said, ALWAYS with oak wood. I tried "alligator bites" at a Cajun restaurant and thought it tasted a little like cat fish. Interesting. The food was great!