posted on Feb, 19 2014 @ 07:41 PM
link
Best proof yet? At 0:14 you can see a figure dashing across, then subsequently a figure of what looks like someone's head appeared...Creepy and possibly one of the best evidence to date?

posted on Feb, 19 2014 @ 07:48 PM
link
i watched this video last night looks good too good maybe the new landlord wants to up his buisness with a doctured video

No not proof at all.

posted on Feb, 19 2014 @ 07:54 PM
link
The link works fine for me but I'm none the wiser, It doesn't provide evidence of anything at all to my eyes. Perhaps I need a visit to the optician or a more fertile imagination.


footage from " cam 2 " ? why do I have a suspicion that other cameras in the pub would reveal the mundane nature of this ?


It's too hard to tell if fake or not anymore... tech is just too good and it's become impossible to tell for sure.

If they have someone stay there over night and actually have them interact with and react to the 'ghost' then we might have something.....

If ghosts were that dangerous there would thousands of deaths by them every year.
Sure maybe some are, maybe they are'nt ghosts at all.

This is your reality, not theirs.

So that would probably help anyway....... it seemed too staged and framed somehow....

posted on Feb, 20 2014 @ 10:30 AM
link
Highly suspicious. The image appears directly facing the camera lense.
Ghost wanted to be on camera for sure then
Sorry I dont by it or ghosts full stop
Whatever the phenomena it aint the dead for me

For the record, I'm pretty sceptical myself.

However, I don't have any genuine, universally-acknowledged ghost footage with which to compare and contrast and must, therefore, take the only logical line...


i personally like skeptics. I have one in my group as a mater of fact. It helps us eliminate false labeling evidence and thinking outside the box to debunk our finds. If the skeptic in the group is stumped, that's just epic lol. A skeptic will change their views only when they want to. No amount of evidence you can show them is going to change their mind until they are ready to do so, so just don't try. Allow ppl to form their own opinions, it'll keep ya honest.

This was discussed here:


and pretty much debunked.


There is some theory that all times and realities are co-existing right now. If this theory was true then the past and future are happening right now. Therefore mabey sometimes there is convergences of time lines, that people from past or future materialize in the now. Therefore that figure in camera is the camera filming the past which is happening now.
edit on 6-3-2014 by AthlonSavage because: (no reason given)

posted on Dec, 27 2014 @ 04:11 AM
link
a reply to: icyboy771z
The video link did not work for me either, however found the footage on youtube and is one of the most convincing I have seen actually, ever!

The pub's building can be dated back to 1210 which is highly plausible for spirits of this age to be there. There were several appearing within the 1.39 minute clip of the CCTV footage. Remarkable!

I was able to see a blonde haired woman walking in a south direction, then fading out and moments later an elderly man manifests with long white shoulder length hair dressed what appears to be some sort of a cape. He remains in full frontal vision for approximately 8 seconds before fading out then appearing for a further 3 seconds and kind of gliding backwards and disappearing into the rear wall.

If you also look very closely and focus to the top of the roof you can also see the attempt of about 4 other spirits trying to manifest however, blending together and fading out. This is a very rare find and amazing. Peace, Love and Light.

posted on Dec, 27 2014 @ 06:39 AM
link
Of course, this is an ancient building, over 800 years old. I have have had a pint or two on a few occasions there when visiting Bolton to buy computer parts at Scan near the football ground.

Having watched the video there is no doubt that there is something there. The picture attached shows what looks to be a cowled figure like a monk. Is it a genuine ghost or apparition? Who can tell for sure, but it is there, and is a dense enough source that is picked up by cam 2? 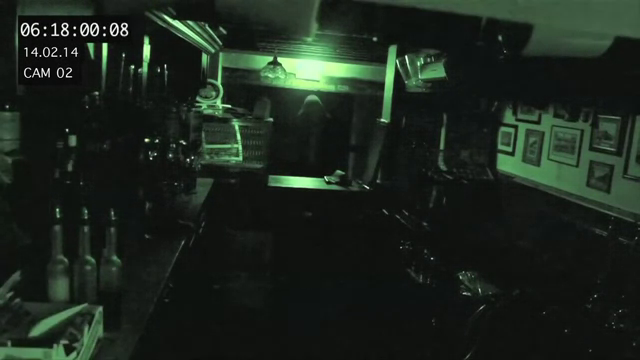 A similar 'something was captured by a Portuguese tourist filming the pub from the outside. The following pictures try to show what he recorded. The first picture shows the upper right window (red circled) immediately before that 'something makes its appearance and dash across (but on the inside) of the window.

The second image shows that something is there. The best description I can give is that it looks like a cloaked Predator (as in the film). Of course, the landlord always waits for a tourist to appear outside his pub filming so he can then play his ghostly tricks. The shape moving across the window is very similar to that seen in the first image in the interior of the pub.

Bear in mind the different times these occurrences took place.