With the law they tried to pass in Kansas failing, I gotta ask. Is Christianity inherently discrimitory?

I'm not just talking about the gay thing. There are more then a few who think the focus on homosexuality over other sins is misinterpreting the text anyway.

My main point is.

Is the concept that if you don't believe in Christ,Then your soul is doomed to be tortured for all eternity, discriminatory? I'm my humble opinion this is why Christianity catches so much flak.

It's not the thought that there's a paradise awaiting the faithful. It's the fact that they think. " if you don't believe what I believe. You'll BURN.

If you look into history. It's at best questionable weather hell was originally intended as a place for all the unbelievers to be punished. Or weather it was a creation of dark age clergy who found more people would sign on if they preached " you'll burn in hell forever" then "you'll get to go to heaven if you do".


What do y'all think?


All Abrahamic religions are both Discriminatory as well as Exclusionary. Because of those two principles within their teachings they have been at war with mankind and each other since they began and will continue until either one of them or none of them remain. There is no other way out for them aside from changing their Dogma or Death.

posted on Feb, 19 2014 @ 10:53 AM
link
Every religious sect is discriminatory in some form or fashion because they close themselves off from other people who aren't part of their "group". When you believe only you and a select few get saved while the vast majority go to hell forever, that develops a superiority complex because they believe they are somehow special because of what they believe. This isn't just limited to Christianity though, it extends out to other religions as well and even into politics.


Buddhism is not a religion? They don't send you to hell for not believing in The fat one, i think


I'll let Sir George say it…Churchianity uses the threat of hell fire unless you believe (read that keep attending church) to line their coffers. Its that simple and that archaic.

Doesn't mean don't undertake spiritual pursuits, just not the man made ones.


Yes, but discrimination is not inherently immoral. We all do it about 100 times/day. You can't stop decision making and value judgements based on experience and data. Might as well give up on that.


Not all religions are exclusive however. Some Eastern Religions like Taoism and Buddhism aren't exclusionary.

One path leads to God = Exclusionary

All paths lead to God = Inclusive

It's really not a good religion. So much hatred as been seeded from within the bible. 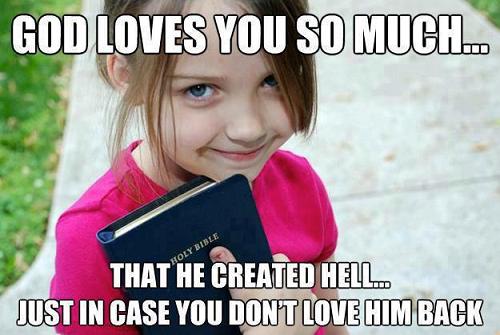 Seriously. It depends on which sects of Christianity you're referring to. The more fundamentalist and legalistic sects believe in everlasting separation from god. Some believe in hellfire, a few don't. I would say elitist would be a better description of the fundies, leaglists, and literalists. Whereas you have other sects who aren't near as exclusive and judgemental.


That is a matter of several things, including perspective, but all I would say about that, it that Christians who discriminate do so out of ignorance, not only of the needs and beliefs of others, but of the intent behind Christs message, not to mention his deeds, and who he associated with in his life, according to the Bible itself!

If you read the sections of the Bible, which contain the words of Jesus Christ, you will not see a prejudicial word amongst them, because his message was forgiveness and love. He only showed anger and fury against those who abused his fathers name for their own gain. You do not see a page where he beats a homosexual over the head, or expresses loathing toward persons who have nothing.

The organisations which falsely claim to operate on his behalf, however, make an awful lot of noise about all sorts of things, but I pay very little attention to them, and I would recommend to anyone, that they do the same.

posted on Feb, 19 2014 @ 11:31 AM
link
The real anger against Christians is usually when Christians tell people they are sinful for murdering and stealing and causing harm to others. Just look at how bad people treat others today and exploit them for gain. Go condemn them and see what happens, most everyone will defend the evildoers..


42 “But whoever causes one of these little ones who believe in Me to stumble, it would be better for him if a millstone were hung around his neck, and he were thrown into the sea. 43 If your hand causes you to sin, cut it off. It is better for you to enter into life maimed, rather than having two hands, to go to hell, into the fire that shall never be quenched— 44 where ‘Their worm does not die And the fire is not quenched.


41 The Son of Man will send out His angels, and they will gather out of His kingdom all things that offend, and those who practice lawlessness, 42 and will cast them into the furnace of fire. There will be wailing and gnashing of teeth.


I am sure about his intent. There are the examples of Jesus speaking out against sin, but he offers no SPECIFIC detail as to which sinners he refers to. He was a man who broke bread with, and gave love to all manner of criminals, deviants, prostitutes, thieves, bandits, lepers...

Context dude... Do not ignore it!


What really!?! Yea , that's why hitler is looked at as a hero not a monster... I mean I can't buy a pack a smokes with out bumping into 10 hitler apologists. ( clerks reference hehe.) everyone agrees murder, assault, theft and rape are evil. Who defends them against Christians. That sounds like a right-wing talking point. That's like saying " the white Christian male is the most discriminated against person in America. Ridiculous.

Christians get blasted for attacking the victimless moral issues. Sex out of marriage. Gayness. That kinda stuff.

Talk about defending criminals. You can get out of jail for finding Jesus, after commiting pretty heinous crimes! Who pleads to courts for lieniency more Athiests or priests and preachers?


Context homie.... The OP is weather Christianity's teaching all none believers burn in hell is discriminatory. You said Jesus didn't preach that bad stuff would happen to you. he preached the good stuff. After the quotes put up. Not seeing what context you are seeing. Maybe ALL Christi's other sayings preach love. But those don't really.... Unless he said bless his heart, or I don't want you to take this the wrong way first.

Context dude... Do not ignore it!


Well said. You might want to take that statement, and re-read the the gospels.

Jesus was not ALL about love and forgiveness. Anyone who thinks so, is reading the gospels looking to confirm their bias. He was very straightforward and adamant about the way to "everlasting life". That he ate with "sinners" is no surprise, considering those who sat in Moses seat weren't doing their job.


‘The stone which the builders rejected Has become the chief cornerstone’? 18 Whoever falls on that stone will be broken; but on whomever it falls, it will grind him to powder.”


Oh joy another Christian bashing thread !
maybe Christians should start going around declaring death to all those who insult Christianity, or they could just come up with insulting names for those who are non Christian and instead of having opinions on homosexuals perhaps just hang them
reject/disown there children if they marry a non Christian

I would like to know one thing what good has homosexuality done for the human race ?
nothing but spread disease and make men have to wear tampons
its a vile unnatural habit that some people find repulsive


You know, anyone would think that you were deliberately trying to scupper any possible reconciliation between the people of this planet, or indeed any understanding of the positive message of Christ.