What is your take on this?

posted on Feb, 18 2014 @ 06:55 PM
link
So some time ago I made a thread where I tested out a myth going around the web called "Fake Snow"/"Chemical Snow". So just as the myths stated, the snow I tested got burnt without a single drop of water. I was thankful to those who posted scientific answers/theories and discussed it. But I was disgusted with the majority of people who only decided to bash the thread to death.

I was still left with questions and confusion though.

So my dad tells me today that he went out to fix my uncles ATV that he was using to plow snow (we live in New Jersey).
He told me that he added starter fluid to the bike and that something went wrong. The bike caught on fire. They panicked trying to put it out. My dad grabbed a shovel and started throwing snow on it...what happened? The snow caused the blaze to erupt and grow. My uncle covered his jacket in snow and tried putting out the fire only to have his jacket quickly catch on fire. They managed to put out the fire luckily without things getting damaged.

My dad was confused cause he thought that snow was supposed to help put out fires and such. I see his logic, I might have a scientific explanation for it, but who knows.

What is your take on this ATS? Do you think the snow has some chemical mixed in? Or is there a scientific answer.
(Please don't bash this thread. These are just questions and about things people are talking about on the web lately).

posted on Feb, 18 2014 @ 07:03 PM
link
my theory is thus.. the fire was not hot enough to generate water for it to put out the fire...
and some times when water all by itself will spread fire as gas and petrol floats on water, so...

posted on Feb, 18 2014 @ 07:09 PM
link
When I was younger we were told by firemen that water isn't the solution to every fire. In some cases, chemicals involved could make it worst by adding water trying to extinguish the fire.

Maybe the product your dad and uncle used fall under this category?

I think that video about the snow not melting was exposed as a hoax, but to be honest, I am unsure. 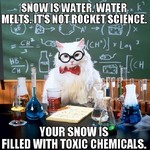 
Don't throw H2O on a petroleum based fire.

That's why there are different types of fire extinguishers.


Before our last big storm (2 weeks ago?) our skies were sprayed heavily, the snow fell and we did the "burn test", and found our snow turned black with no moisture melt.

My daughter lives 150miles away, their skies were NOT sprayed, and her snow melted normal without turning black when put to the "burn test".

That is VERY suspicious to me.

Yet for 47yrs have I never seen snow Form the way it has this year. Seen something on FB about it though passed it off until it snowed! It was like walking on waves frozed in time would be how I saw it that day. Thinking back all them years never seen anything like it before so the snowball burning came back to mind.

Other then the mass volcanos lately, bad air, red dust in TX. Seems it's catching up to us in ways we haven't considered yet.

Although I'm waiting for rain soon, hopefully it does not glow this year! lol

Water is oxygen and hydrogen.

Why doesn't it explode then. I need more science.

I had no idea that water melts either. I mean, that's amazing. This really should be rocket science.
edit on 18-2-2014 by sn0rch because: (no reason given)

posted on Feb, 18 2014 @ 07:30 PM
link
If you got a petrol fire you need to use something that will starve it of oxygen! Water is not a good idea if the fire is too big, just note what happens when fools pour water into a chip pan thats on fire!

As for the snow. If it doesnt melt then I assume it'll still be their during the summer months?


Hydrogen and oxygen are a molecule, they cannot break. They form H2O 'Water'

Alone Oxygen or hydrogen can explode, but together as a molecule, they will never explode or catch fire.

Do you understand now?

Snow should melt and turn to water, not water melts, I just noticed what you're talking about, heheheh.
edit on 18-2-2014 by Booshka because: (no reason given)

posted on Feb, 18 2014 @ 07:57 PM
link
Putting water on a petroleum-based fire just spreads the fire. The fire just rides on top of the water. Lots of people have been killed that way. You need to starve the fire of oxygen, which means smothering it with something like baking soda, a halon or CO2 fire extinguisher, or if the fire is contained (like in a pot) put a cover on it. Obviously that didn't work when the fire was in the open air.


Maybe there was a bit of petrol somewhere.
When I was a kid I filled up a metal bucket with petrol, panicked at the flames when lit. Grabbed the hose to put it out and a fireball shot up into the sky. Plus the water pressure splashed gas everywhere making fires all around. Learnt my lesson though. Petrol fire and water not a good result.
edit on 18-2-2014 by ZeussusZ because: (no reason given)


You might find it pays to be a little more skeptical about so called exposed hoaxes. There are a lot of people on forums like this who are paid to undermine factual logic and premise. You may care to note the first 1-3 responses in threads. While havent got the time to collect data on it have distinctly noted that the first few posts are nearly always negative to the thread subject matter. This particularly so with UFO alien threads and threads like this one.

You might choose to ask your self why is that most of the first few posts on most threads negative or quick to claim hoax?