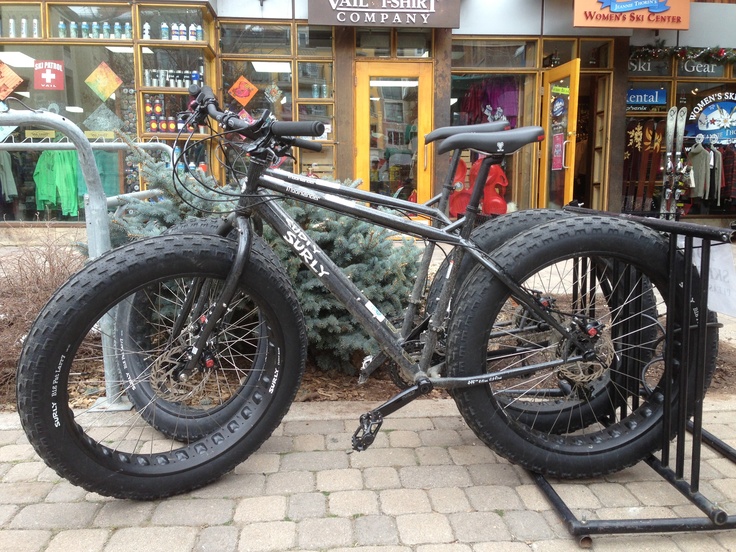 It was upon a recent trip to the bike store to get my Trek tuned-up before the start of this up coming season that I was introduced to these new style 'Fat Tire' Bicycles.

They were invented up in Alaska and designed to ride on snow, sand and somewhat marshy ground. With tires up to four inches wide they give a broader footprint and allow you to traverse ground where you'd have to abandon a more traditional mountain bike.
From Wiki


Fatbikes were invented for winter trail riding and racing in sub-arctic Alaska and simultaneously, for touring the deserts of New Mexico. Their utility has expanded to include all forms of cycling; they thrive in snow, sand, desert, bogs and mud as well as riding what is considered normal mountain biking.

The frame looks more like a BMX styled bike and except for one carbon framed custom high dollar model, their a lot heavier than my Trek.

Talking to the sales guy I learned there are a growing number of people who will ride these on the back trails traditionally reserved for us cross-country skiers. I was also told there are a few ski areas that now allow these bikes on their downhill runs. Though just thinking of pulling a 'Dookie' on a bike makes my nuts hurt. 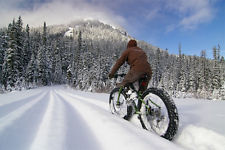 Pulling a Dookie, BTW is when you jump off the ski-lift, trying to look cool as you ski away but in this case you would make a hard landing on the bikes saddle and it's kind of hard to look graceful once your eyes fill up with those big old alligator tears.

I can see where this style of bike will give you mobility where other bikes fail, snow, sand, maybe even muddy trails as long as their not to soupy. My problem is when the wife and I ride we usually have our daughters with us astride a Trail-a-Bike 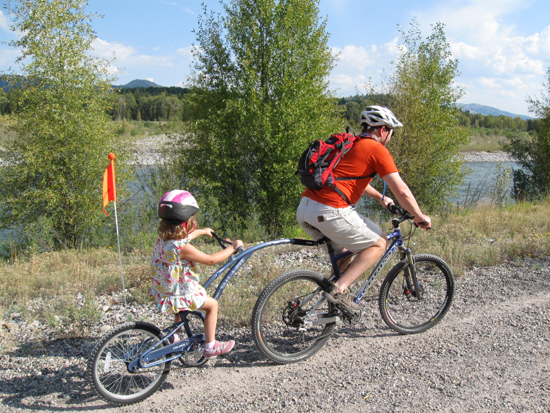 If we wanted to continue using them we'd have to mod the frames to accept a rim and tire for a 'Fat Tire' to match. FYI a normal Trail-a-Bike cost just over $200, to have one modded or custom made might place them right out of our toys budget.

A quick Google search listed 'Fat Tire' bikes with starting prices around $300 USD, that carbon framed one I saw in the store and just over $2,500 cost ten times what I paid for my Trek! and again Google as another carbon bike listed for just under $6k!
Guess I'll have to wait until after I win the power ball before I can afford one of those high end machines?

Seems to me a "Fat Tire' might just be the perfect form of transport in a real SHTF, natural or man made disaster.

posted on Feb, 18 2014 @ 11:09 AM
link
Oddly enough, this is one topic I've been thinking about should TSHTF...but for me it would have to be flatless (puncture proof) technology and other ways for off-road travel, for a myriad of motorized or non-motorized cycles and bikes.


Went to the Surly website and it seems that there are not a whole lot of options for the customer to customize the bike. I was trying to find out how long the tires last. They look rather soft and would probably wear faster on a paved or gravel surface. I ride the 400 trail up in Wisconsin when I go to see my folks in the summer.

I think I'll just stick to my ol mountain bike (K2) as I can find parts for it easily if need be.

I did like their bike trailers though. I didn't know they made them that big.

Trouble is they ride like complete crap on anything that's dry and hard like road, gravel, dry trails, etc...

They definitely have their purpose and for snowmobile trails and things they're awesome.

If you live where there is a lot of snow or dunes or things then go for it. For practical travel get something else.

Something to think about in a SHTF scenario is they dont use the same tires, tubes and rims as 99% of the other bikes out there so scavenging replacements parts is pretty much impossible and stocking up replacements ahead of time is expensive.

On their website one of the team members writes


Needless to say, the tires didn’t work so well, but luckily there’ve been some improvements since then.

but he doesn't go on to say what those improvements are?
still with big name companies like Carbondale who's now making rims and FH1 making hub sets it's clear these fat bikes are quickly going mainstream.

posted on Feb, 18 2014 @ 11:27 AM
link
I first heard of these a few days ago. You can win one at mygrizzly.com by regestering and taking a quiz. As far as I remember you don't have to be a customer to participate.

This is what they're giving away $1600 Ultimate Beast Stalker 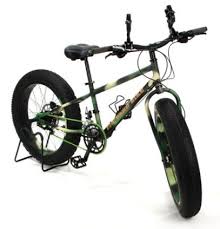 
You know, last week I watched an ep of top gear and on it the showed the coolest thing I ever saw
The Gibbs quidski a four-wheeler ATV that turned into a Jet ski! Living where I do I'd have to drive down to lake Powel to use the jet ski part... one of those deals where it costs way to much, impractical as hell but--- I still want one LOL

I'm sorry, but when it's snowy, 15F, and pitch black outside, the last thing I want to be doing is riding a bike. Cars hit bicyclists all the time, and on snowy/icy roads ... I'm good!


Coming off a ski lift is no big deal..

Several ski resorts make money in the summer catering to mountain bikes. You pay to have the lift take you up, jump off onto your bike and downhill to the lodge.. It is a lot of fun and not very expensive..

As for snow and such, I have never found a time when I would have had to abandon by bike and I have hard ridden all over the United States in sand, snow, mud, clay and everything else I could find to jump into..

posted on Feb, 18 2014 @ 11:38 AM
link
I have done some thinking about BOV and there are many options. If you have a lot of money and want to Bug out in style I would choose a Unicat.

A little better option for hitting tighter more remote areas is the Rokon.

Now while these are good idea they still require fuel. While the fat tire bike is a good idea and doesn't require fuel you still can't beat the tried and true method of back country travel.


A couple of good horses and pack mules is the best thing you can ever get for back country traveling. The native Americans and others have been traveling that way for centuries long before bikes, mopeds, and fat tires.


Just this weekend we had a cyclist fall victim to a hit and run. Even with the laws we have here in Colorado to protect cyclists it's a risk we take every time we hit the road.
But these bikes were not made for the road, their designed to go places a car cannot

posted on Feb, 18 2014 @ 11:45 AM
link
Ugh...I'm too old to go back to riding a bike. I probably put twenty thousand miles on a bike when I was a kid. I don't even care to drive a motorcycle anymore, give me a good old four wheeler or one of those little 4x4 trucks and it won't be so bad. The young can ride bikes, I would rather walk to town on this road than ride a bike. The traffic will kill you.


Tell that to all the guys riding them around my city in the winter time! They ride in the road, in 35 MPH zones doing 15 MPH or less. They clog up traffic, are difficult to see, and act offended at my car and I. It's as if my car is the source/cause of all the world's ills and they themselves with their bikes are the solution.

I don't hate bikes, I hate the attitude of those who ride them. My 2,000 lb killing machine takes a lot longer to stop than your 35 lb carbon fiber bike. I also happen to like getting places on time, and riding in the middle of the road (as per the law here) slows me down considerably.

It's like being on a "gluten free" diet and always talking about how bad gluten is all the time.


That's cool, but if TSHTF then most likely I will be hiking with a travois, or better yet, a travois cart-like contraption, perhaps tied to a large dog or, if I can find one, a donkey or horse, which both may come in handly later for farming needs.

Any way, this is the reason I've been thinking about punctureless tires, that and going to an auto show this past weekend and looking at tires on vintage 1930's vehicles, which to me seemed to be airless.

Here's a company that has re-invented the wheel tire.


I hear ya and have had my own run ins with rabid super green cyclists, esp up in Pagosa Springs where all the rich and beautiful people live--- and give me frownie-faces as I wave at them with my Cheetos stained fingers and breath hi, to give them a good waft of big mac scented breath.

The answer is you need a better brush guard Winx
edit on 18-2-2014 by HardCorps because: (no reason given)


rolling resistance is abysmal - they might not sink in boggy ground - but try peddling one .

Gazrok
I'm with one of the above posters. Once the fuel runs out, I'm relying on the old school method of riding my horse!

Or a horse/oxen drawn covered wagon. That's why I am interested in tires that can go the distance.