Isn't this called "Leading the witness?"


May have been the desks and paper and chairs.
Or magic
edit on 9-2-2014 by ZeussusZ because: (no reason given)

And doesn't dustify concrete and metals

Those are the real questions

How did the metal filing cabinets disappear without the paper being harmed?

Where did all the dust come from? 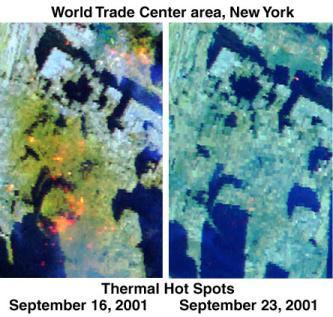 A report on the Government Computer News website quotes Greg Fuchek, vice president of sales for LinksPoint Inc. as stating: In the first few weeks, sometimes when a worker would pull a steel beam from the wreckage, the end of the beam would be dripping molten steel 3

A Messenger-Inquirer report recounts the experiences of Bronx firefighter "Toolie" O'Toole, who stated that some of the beams lifted from deep within the catacombs of Ground Zero by cranes were "dripping from the molten steel." 4

A report in the Johns Hopkins Public Health Magazine about recovery work in late October quotes Alison Geyh, Ph.D., as stating: Fires are still actively burning and the smoke is very intense. In some pockets now being uncovered, they are finding molten steel. 6

An article in The Newsletter of the Structural Engineers Association of Utah describing a speaking appearance by Leslie Robertson (structural engineer responsible for the design of the World Trade Center) contains this passage: As of 21 days after the attack, the fires were still burning and molten steel was still running. 8

The book American Ground, which contains detailed descriptions of conditions at Ground Zero, contains this passage: ... or, in the early days, the streams of molten metal that leaked from the hot cores and flowed down broken walls inside the foundation hole. 10

A review of of the documentary Collateral Damage in the New York Post describes firemen at Ground Zero recalling "heat so intense they encountered rivers of molten steel." 11


None of the official government reports have commented on these reports, although FEMA's Report contained an appendix disclosing evidence of mysterious high temperature corrosion of steel due to a combination of oxidation and sulfidation.

And doesn't dustify concrete and metals

Those are the real questions

How did the metal filing cabinets disappear without the paper being harmed?

Where did all the dust come from?

Experimental weapon, or 99% efficient small yield tactical nuke? Those are around now, but I don't think it was made public back then..

Since nothing we know of explains a lot of what was seen, I think it had to be one of the above.. The Bush's have always been very well connected and on the inside of most black projects and weaponry, so it seems likely.

It would not have left the papers

If there is ONE type of person I hate more than any other on this planet it is the 9/11 truther. These people are so devoid of any actual reasoning they conjure up plenty of BS to fit their wild theories. Even when they are debunked they throw around words like - disinfo, troll and other similar words that a person who has lost an argument will do.

The Aluminum from the plane burned 1800 F for some time during which the trusses bowed and the aluminum spewed downwards towards the plaza etc etc!!

And those that think Aluminum burns silver as that loser JONES claims, well only at its lowest temp, when burning at 1800 degrees it is light orange!!!!! FACT!!

NIST reported that it was Aluminum melting not steel!!

There are NO "confirmed" pics of molten steel, as in pics that are backed by scientific data on TESTED Molten steel!! NONE


Nist and we all know how reliable they are

And i see you didn't even touch on my questions


The smoking gun is the 52nd floor ...according to the NIST report it was reinforced to withstand a collapse of all upper floors with the idea of a big jet hitting it and exploding....how is this significant? The collapse did not even slow down at this floor in either building.

There was no molten steel that i heard of they found alot of melted aluminum but no steel.

With both the os and the main ( see disinfo) conspiracies theories

Will be taken on

Where i will take everyone to the outer limits

With both the os and the main ( see disinfo) conspiracies theories

Will be taken on

Where i will take everyone to the outer limits

I have a question at this point what difference does it make ive never understood that? Heres what i mean there is no way to prove anything at this point its hit like the JFK assassination. You can never prove it its been to long the only evidence left is the official report. So my question why does one put so much time and effort into something that at this point can never be proved? This amazes me to some extent its almost like an addiction people get rabid over this but its like beating your head against a brick wall when do you say hey i think ive had enough?


It is personal to be honest

We watched the towers fall together

We watched his dad die

I drove with him to new York

A great man i never got to meet

posted on Feb, 9 2014 @ 11:57 PM
link
Some say there was no molten steel.. Okay, then what was used to shatter the steel all the way to the ground? No molten steel means building did not fall down at free fall. Or something else caused the very strong beams to just disintegrate.. there does not exist publically anything that can do that to high carbon steel beams, or even mild steel beams.(Things that MELT can do it though)..Maybe it was a witch doctor that did a "steel disintegration ritual" or just good old fashioned Voodoo magic.. even if there were no pics of molten steel (I saw some), would not mean that there wasn't any molten steel..

Just one lie in the Nist report discredits the entire thing and makes everything suspect. That's where they made their critical mistake. But no molten metal poster, you can keep believing in those dishonest people if you like.. also, people who think for themselves is far superior than to think in a majority rules mentality. It is the same as copying the student's test answers in class next to you..
edit on 9-2-2014 by alienreality because: (no reason given)


Sorry to hear that alot of good people died that day. But can i make a suggestion put this effort to uncovering corruption now the US is in trouble and people need to wake up before its too late.our politicians no longer work for the people they are ready to sell us out to the person with the biggest wallet. And if things dont change soon i dont think the US will be around more than a couple of decades and well frankly were the only country left that at least pretends to fight for freedom.Even if 9/11 was a conspiracy at this point you couldnt prove it if they did they got away with it so to speak. Thats why i think its better to try to keep an eye on what there doing now but hey no one ever listens.

PS sorry kinda sounds like a rant i guess i need a break from politics and coffee.
edit on 2/10/14 by dragonridr because: (no reason given)


I do and will continue to do so

I just didn't get it done before the requirement change

Now that my wats is good i plan on completing it

If for no other reason than his memory

I agree with your sentiments though


There's a pretty good FEMA analysis report on WTC 1, 2 and 7 beams, about their "molten steel" - and anomalous sulphidation (thermite?) found on those beams. Link to FEMA

The conclusion in this report is, there is no clear explanation for the reason of the high sulphidation found on the broken beams on WTC1,2 and 7. I.e. why there is presence of highly corrosive sulphites on those beams.

You might read this any way you like, but for many this report and text would imply some level of un-naturally occuring processes, and that even including active implantation of highly corrosive sulphites on these beams with direct intention to bring these buildings down.
edit on 10-2-2014 by deckdel because: (no reason given)