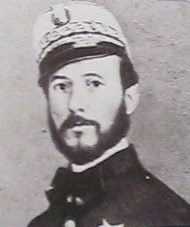 One of the most influential Spaniard from his time General Prim rise to military glory in Spain during the first Carlist war a Spanish civil war fought between factions seeking the control over the succession of the throne in favor of the future queen Isabella II and of the brother of the defunct king Carlos de Borbon.

Long story short Ferdinand VII did not had male descendant to take over so he change a century old rule to allow one of his daughters to become queen, over the old law his brother would have become king. During this 5 year war the subject of this topic fought in favor of Isabella, not being part of the royalty or having any military training he started from the bottom of the military chain but thanks to his bravery and command skills by the end of the conflict at the age of 26, having participated in 35 battles he had attained the rank of colonel.

After this war he participated in conflicts in Africa and Mexico, amount others. During US civil war he supported the union and during a trip to USA he even visited Lincoln.

A liberal man he opposed the government of the queen regent Baldomero Espartero when he started his political career, and soon after taking office in the parliament participated in a successful rebellion against Espartero.
After a lifetime of rebellions, condemnations and pardons in july 1869 Prim became president of the council (president of Spain) and was made a marshal after Queen Isabella II was deposed During the Glorious Revolution. This revolution instituted a parliamentary system in Spain that promulgated a liberal constitution, first in Spain since 1812.

However Monarchy in Spain have strong roots even until our days and the revolutionary spirit that overthrown the queen was in disarray. In a last ditch to remove the Borbons for good Prim started the search of a new king that would act as a liberal puppet, Germans and French were no good but in august 1870 an Italian prince, Amadeo of Savoy was chose as the ideal candidate, in November 3 was promulgated King Amadeo I of Spain.

His triumphal arrival to the country was November 27, same date of the shooting against Prim. His kingship lasted 2 more years during the time the first Spanish republic was formed and the fate of Spain was changed having repercussions in the entire history of the XXI century.

The first president that tried to institute a republic instead of a monarchy in Spain was killed one and a half years after taking the office. At 7pm December 27 1870 while leaving the parliament his carriage was intercepted by a dozen of assassin and shot. His demise was certain as there were groups of killers in all directions from the parliament waiting to kill him.

A tough man had “luck” that day, usually traveling in the other side of the car this time he was on the left, so the best shooters from the party dint have a clear shot; wounded in the chest lasted 3 days more until his death.

The official report of the autopsy revealed that the wounds got infected and this caused his death; during the General Franco regime a second group of expert’s corroborated the finds of the first autopsy. It is good to point out at this point, that before his death Franco make sure the return of the Borbons even during the times of the present republic at proclaiming the current king Juan Carlos de Borbon.

Now after 40 years of the General Franco dictatorship and 140 of the assassination of General Prim happens this: a group of forensic academics of different Spanish universities want to perform routine analysis to the remains of the general as an exercise to assess the expertise of the field in the country, but what they find is nothing routine.

It is said that a mason start from the lower level with a blind fold to represent his lack of knowledge and at the 33 degree highest level of masonry a man has his eyes truly open. This is exactly what the research team found when they first assay general prim mummy, and was quite literal indeed. 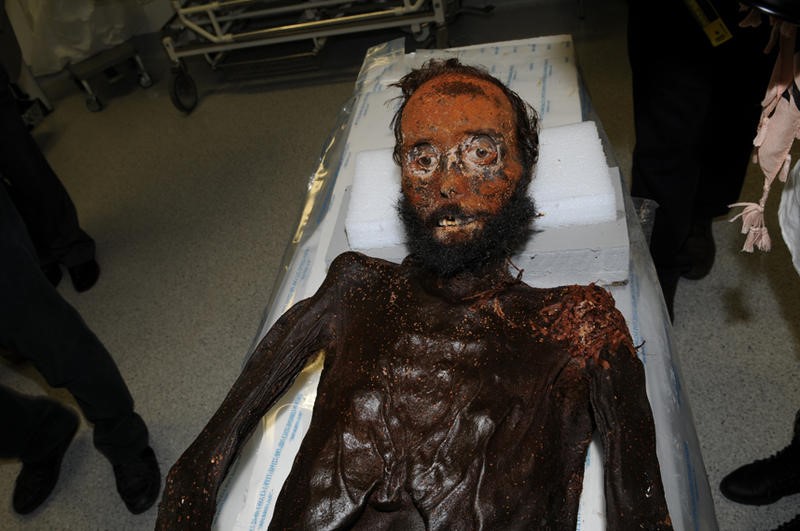 It seems Prim, a grade 33 mason was buried with a special masonic ritual in which his eyes were replaced with glass pieces to represent his enlightenment, apart from this and the 2inch hole in his left shoulder from the bullet hole another thing was pretty obvious to the researchers. The lack of autopsy marks.

Two official autopsies and not one autopsy mark concluded that the cause of death was medical mal practice causing an infection in the bullet wounds, that killed him in 3 days; the new team dint find trace of this infection in the well preserved body, but what they found was a strange mark in his neck. 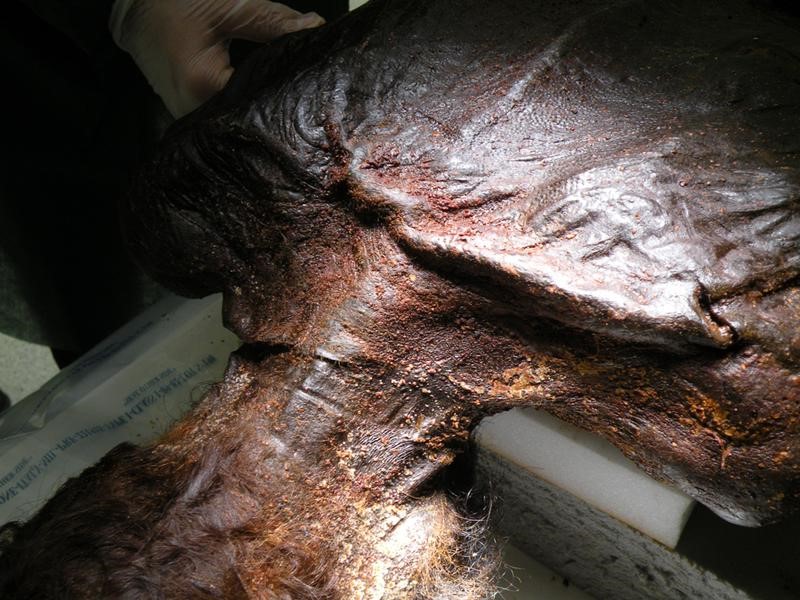 This new research team studied the marks and reached the conclusion that they goes around the neck crossing in a x pattern and can only be the result of chocking marks.

So it seems the stubborn General was not dying quick enough and it had to be executed in his bed, perhaps with a belt thick enough to leave the marks.

Who killed the good general? I am not Spanish nor do I know enough history to make a guess but according to Francisco Pérez Abellán, a Spaniard criminalistics reporter, only one person was in the position to allow a killer into the deathbed of Prim, he makes perhaps sensationalistic claims of masonic complots and links the killing to the failed replacement of the Borbons by the Saboya and claims that another suitor to the throne, the duke of Montpensier was the intellectual author of the crime.

In the meantime one thing is certain, the group of researchers that started the investigation did not had any conspiracy theory when they started the analysis, they reach conclusions regarding the body and the body alone was based on the forensic evidence, and now they face persecution and where quickly disproven by another official group of specialist, according to TV declarations of one of the researchers of the first group it was said of them that it was a shame death penalty was not in place in Spain because they surely deserve to be shoot (fusilados). It is important to note the new team makes no reference to whether or not Prim was summited to the first two autopsy.

A tale from the old world of how real conspiracy are covered even 140 years after the crime, perhaps the same perpetrators learned for future crimes as JFK how to leave no chance of recovery for the victim, I hope my fellow ATSers find worthy and enjoy my first original thread, I wanted to do something special for my 500 post, unfortunately all sources are in Spanish.

WoW my work is really the bottom of the food chain here in ATS, I'll just limit myself to bite my tail from now on

I am a bit confused about the "masonic" ceremony that replaces your eyeballs with glass ones. I have been a mason for a while and only know of the Masonic rights given at a funeral. I didn't know we had any death ceremony. And since the Scottish Rite is an elective side body that not all masons join, It just seems a bit off. Do you have any English sites that can back up that information?


No sorry he is not someone really important after 140 years, I saw the pictures of the body with the eyes and it was weird to me, so I check and I believe in the third link says that about being glass, it seems to me the reporter I name made some things up.

Anyways It is strange to replace the eyes, it's the first time I see this.
------
From the second link and google translator

Prim was a Mason and as such was buried under a Masonic rite which could include putting glass eyes, a foreign element and never found the remains of a mummified body

my bad English is better than google translator (in my mind at least )
edit on 3-2-2014 by Indigent because: (no reason given)

I am trustworthy no? it's not like lizards or reptiles in general have a bad reputation
edit on 3-2-2014 by Indigent because: (no reason given)


Thanks for clearing that up. It seems the guy is good at fantasy. To the best of my knowledge, we don't do mummys.


The mummy part and the glass eyes is not fantasy, it wasn't mummified on porpoise it just got mummified, about the eyes replacement, I guess weird Spanish masons is the best guess they got, yay I'm starting to regret post 500!!!


Really nice murder mystery. So a major figure in Spanish history was murdered and it was covered up for many decades. Ah, the intrigue. Very good thread, even if the Mason angle was a bit off.


Yes i liked it when i first hear about this, the guy was a war hero for the monarch, he fought all around the world for her, when she started to be more tyrannic he overthrown her in order to make a republic, but it lost impulse so he tried to salvage it by instating a puppet monarch, he chose wrong and it got killed for it.

I think all 20 century events in Spain can be traced to the deeds of this man, its curious that some powers still try to hide how he truly die, and there is no official responsible of the murder to this day.
________
The photos link is broken here it is again


Quite an interesting fellow, a pivot point in an entire shift in Spanish history. I've never heard of him, but intend to check out your links and Wikipedia pages. And finding out that he'd likely been strangled when they dug him up, the stuff of movies (or at least how movies used to be before the explosions and car chases and robots run amok).