Another anomaly from Mars - this time it is a Leg

The picture PIA17766 was posted on the NASA website on 29/01. While the picture has great interest, this object, approximately 25% from the left and near the top of the dune caught my eye. In higher magnification, it looks like a leg. Now know this is the brain playing tricks (the brain is very good at finding human shapes). What does seem strange though is the straight line almost pipe like. Hopefully someone can help me with how/why this anomaly seems so straight and smooth - and so devoid of small rocks and stones, which litter the area. 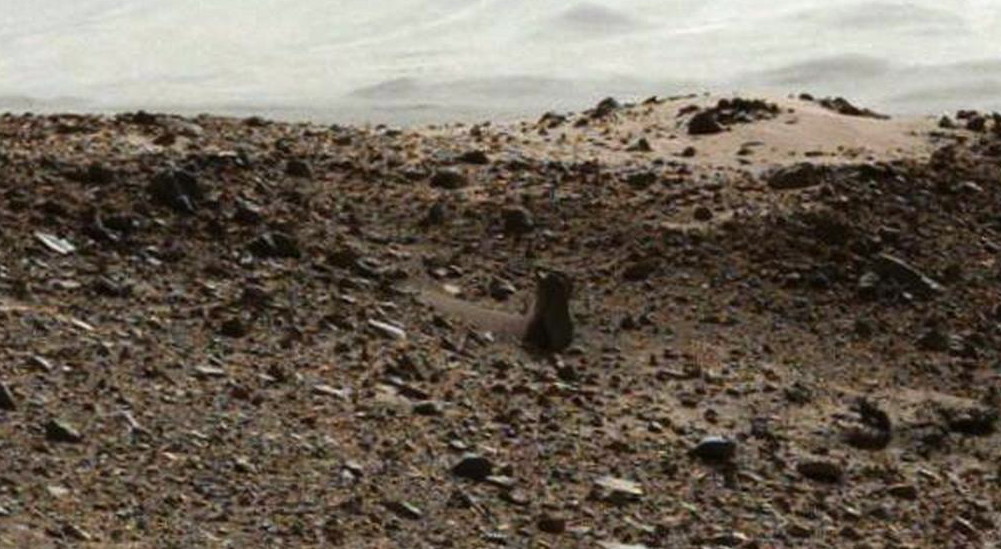 
It's a small sand dune next to an upright rock , there are many examples of small dunes on Mars.


No, he's just checking out your legs.


No, he's just checking out your legs.

I love looking at these rocks!

posted on Feb, 1 2014 @ 05:14 PM
link
I'm just waiting on a pair of buttocks poking just above the surface and the front wheel of someone's bike parked between them. Only then will i believe.

posted on Feb, 1 2014 @ 05:18 PM
link
I can see it!!
The Martians have their own version of the Superbowl.
Regrettably, this guy felt he had to "drop back 10 and punt" and kicked it so hard that his leg flew off!
Or it's a sand doon blown up against a rock.


That black rock, in the middle, it looks like the vulture from this other thread got hungry, then decided to pose in another picture for us.


I will Double that pull Sir, and raise you two fingers. HEE HEE!


Obviously it's not a leg, but the cylindrical appearance of the object is kind of weird. It almost looks like a fossilized tree trunk or something, with the "foot" part being what is left of the roots.

posted on Feb, 1 2014 @ 08:54 PM
link
Or it's a rock. Because it's always a damn rock. There's these things called rocks, and there are a lot of them in this universe. You should get used to them, because you'll see many of them in your life.

If you see a space shuttle filled with Frenchmen and Russians accompanied by the alien from Alien then tell us about that, cuz that would be crazy.
edit on 2/1/2014 by unb3k44n7 because: (no reason given)

posted on Feb, 2 2014 @ 05:54 AM
link
Always look for the unprocessed photos, NASA usually makes those images too dark, I don't know why.

Here's the original, as posted on Curiosity's site.

posted on Feb, 2 2014 @ 07:30 AM
link
That is really disturbing and it makes NASA a bunch of satanist freaks taunting the public. And that is most certainly a leg.