posted on Jan, 31 2014 @ 11:50 PM
link
Apparently, tight t-shirt guy from "Ghost Adventures" has decided to purchase the house that Latoya Ammon's lived in for 35k.

You can read about the Latoya Ammons case here:


"Ghost Adventures" host Zak Bagans has taken on his most terrifying project yet -- he just bought a house in Indiana ... believed to be the site of one of the most terrifying demonic possessions ever ... a rumored "portal to hell."

The house rose to fame in 2012 ... after a mother who lived there reported her 12-year-old daughter and 9-year-old son had been possessed. Shockingly, there are even docs from child protective services that back up her claims.

Among the many scary incidents ... the mother says she witnessed her daughter levitating above her bed.

She also said she saw her son walking on their ceiling ... an account corroborated by several other witnesses. The mother did everything she could to de-demonize the house -- including building an altar and hiring an exorcist -- but nothing worked and she eventually moved.

Zak tells us, he caught wind of the horrifying tale and made an offer to purchase the home for $35,000 -- the owner was all too willing to sell.

It's TMZ, so it's not much of a source, but this strikes me as something Zak would do. As I stated in the original thread linked above, cases like these have very little to do with the house, and much more to do about the people involved. I am sure Zak will make his money back by documenting his stay in the house for television, but I doubt he will encounter anything resembling what Latoya Ammon's and her family dealt with.
edit on 31-1-2014 by DeadSeraph because: (no reason given)
edit on 31-1-2014 by DeadSeraph because: (no reason given)

posted on Feb, 1 2014 @ 12:09 AM
link
In that case, i would like to see him do a "throughout full research get to the bottom" investigation of the place, spanning a year or more.

The problem with Ghost adventures IMO. is they move from place to place without ever getting to the bottom of the place they are investigating, and thats make me believe that it's a fake show, with no intention to really investigate the evidence they find.

posted on Feb, 1 2014 @ 01:15 AM
link
I can't say how "haunted" that house really is, but back when it first happened before it was reported in media, I got a chance to read the police report (I wasn't allowed to make a copy back then). Many things that are being left out would be explained away. The one that mostly gets me is the walking on walls and ceiling one. In the report it said that the child was uncontrollable and his grandmother grabbed his hands and he began stepping away as his grandmother was still holding his hands, he stepped on the wall and walked up and on the ceiling and flipped over, again while his grandmother was still holding his hands, from what I've read, they try to make it seem as though he walked on the wall on his own. My personal belief is that perhaps 'MAYBE' there is something to the hauntings, but what I read in the report can be explained away, I was not satisfied after reading it.

Now that the story is public, I will get a copy of the report and can come back and bring to light what all was reported without the sensationalism if anyone is interested.


This is Ghost Adventures, not Ghost Hunters. I'm not a fan of paranormal TV shows as it always boils down to one thing: Ratings. Paranormal State was confirmed a hoax which lead to it's demise. Ghost Hunters have also been caught faking their night time investigations.

Ghost Adventures did a joint investigation with a man (the name eludes me, my apologies) where the guy had his EMF meter "taken and thrown" from his hands. The GA crew was super excited, but on review they saw that the guy actually threw his EMF meter himself. They called him out on it and apologized.

Even though the GA crew does a few things I don't much care for, out of all the paranormal shows out there I feel they're the most honest. But again, it's TV where entertainment and ratings come before anything else.

**Edit**
Forgot to touch on the OP's story. From what I've come to understand, Zak has a big issue with trying to find an explanation (or proof) from his own past experiences. I honestly feel he wants the world to know that there IS something after death as he's experienced it. And what better way then to buy a house like this? They can have a 24/7 "lock down", fill the house full of sensors, video and audio equipment and pull evidence as it happens.

Sorry, that was actually a typo, i did mean Ghost adventures, but to me it's same same when it comes to credibility.


Sorry, I have to disagree with you. GH have been caught more than once making "things" happen. GA had one episode (mentioned above) with a less than honest participant and they called him out on it and didn't try to hide it. That in itself means a lot to me.

And as I mentioned, it's TV. Anything for ratings, but I'm still hoping there's an exception to that rule and that GA is that exception. We'll see.

posted on Feb, 1 2014 @ 01:35 AM
link
Well, props to him for purchasing the house. I hope he finds something good in there, but i reckon he would be hard pressed to find anything of a demonic source. As has been stated, demons usually pursue their victims... But, if there is still a lot of activity, i'd say his purchase was well worth the money.

As for Ghost Adventures, i much prefer it over the other paranormal shows. Yeah, they are a bit dramatic, but they've captured some good stuff and are generally more likeable than the hosts of other TV shows, in my opinion.

I hope he finds what he is looking for.
edit on 1-2-2014 by daaskapital because: (no reason given)

It's cool, that is your believe, and i can't touch that.

The way i see it is, they never go deep, they allways show things, but do not try to investigate it, but instead move on.

The flying brick in the cellar is one such case, just before it fly'es, they mention " this is the room" and the brick fly, then they all run away like chickens, if you hunt ghost you should be fearless IMO. That was clearly Dramatisation.

There are just to many loose end's.

weirdguy
what if the people are the ones who's haunted and not the house?
Zak just bought himself a bargain

Or maybe it's Zak himself who is haunted/possessed

Anyway do they still make the show, cause havn't seen it for like two year's or something?
edit on 1-2-2014 by Mianeye because: (no reason given)

Please include me as a member of that club! 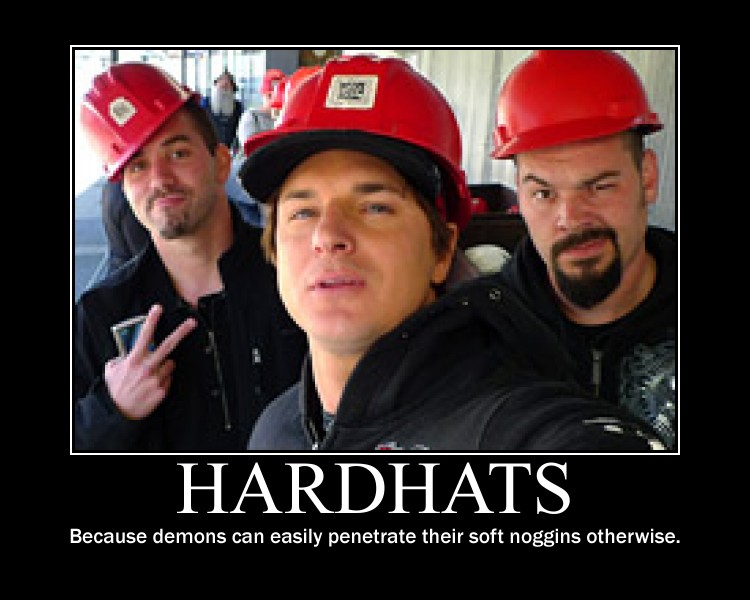 Or maybe it's Zak himself who is haunted/possessed


No I just think he's goofy. Being a reality-TV star has gone to his head. I mean, seriously, the guy wasn't Carl Jung to begin with.

posted on Feb, 1 2014 @ 08:28 AM
link
Zak and his band of yellers might hype themselves up for ratings but I feel they are the most sincere of the lot. He just wants folks to know that ghosts are real and there is an afterlife. That's all I got.

i'd be interested in hearing about what really happened in the house aswell.


I'm wondering if there will be enough room in the house for all the spooks and Zak's massive ego?

Having said that, I find the Ghost Adventure show entertaining...
edit on 1-2-2014 by SLAYER69 because: (no reason given)

He's getting more and more annoying season after season. His "deep thinking" and over explanation of things that "cant be debunked" has really started to irritate me.

Not to mention the reconstruction scenes during the shows... They still make decent episode here and there though.


Still it was a smart business move, looking forward to what ever comes of it, hope he has some kind of show on it.

"A fool and his money are soon parted"