Atlanta is not ready for a major terrorist attack

posted on Jan, 31 2014 @ 11:13 PM
link
I think what happen Tuesday . The 8 to 16 hour long traffic jams , and kids stuck at schools overnight. I think that all shows Atlanta is not ready for a major terrorist attack. Like a dirty bomb, bio or chemical weapons. An emergency evacuation of Atlanta would turn into a living nightmare.﻿


My bud was stuck in that traffic. All because he ran out of smokes and went to a store two miles from his house to get some. It took him just a little over fours hours. He ended up getting stuck in it.

I made mention to him that this is just a dry-run of a SHTF scenario. he wanted to know what he should do. I told him to get the hell out of Atlanta. He says that is not an option. So what else could I tell him...prepare. And quit smoking!

posted on Jan, 31 2014 @ 11:23 PM
link
Wasn't the official Homeland Security Advice to buy lots of sheet plastic and duct tape to seal yourself inside your own house?

There you go - duct tape and plastic!

I knew all those brightly colored, designer duct tapes we were buying for our son's artistic pleasure could save our lives someday ...

posted on Jan, 31 2014 @ 11:23 PM
link
Without a doubt, Atlanta is at the top of the list for a metropolitan sized terrorist attack. All the USA needs to do is let them have access to a WMD. I would say NYC and DC are ahead of Atlanta on that list though ... and NYC remains incredibly vulnerable.


Funny, the only time I feel really safe from terrorism is during foul weather like that, because how would the perpetrator escape? Everyone is just too busy coping with mobility and transportation issues, not to mention just plain survival from the elements.


If the perpetrator doesn't care about escape, it doesn't matter. The Boston bombers were somewhat anomalous in that respect. If a major terrorist wanted to make a dirty bomb or chem attack, I doubt they'd care if they lived through it.


The perps goal is to prevent escape in the first place....is it not? Oh yes and that fear thing...

As for the rest who posted...


True enough, but if they want to inflict the most damage possible, in bad weather where do people congregate? Gatherings are cancelled and people head for home usually, yes?

You are incredibly vulnerable stuck in a gridlock.

I don't know what everyone here was saying during the OKC tornados this past spring, but in Oklahoma, a lot of people have a tornado plan that basically consists of watch the sky, get in your vehicle and dodge when it's coming at you. So, when those big tornados were going through the metro area during evening rush, it got really ugly and you had a lot of people stuck on the highway in their cars with a potential large twister headed their way.

I don't doubt that an evacuation situation in Altanta would move any more smoothly than what we saw, and you have a lot of vulnerable people stuck in cars. 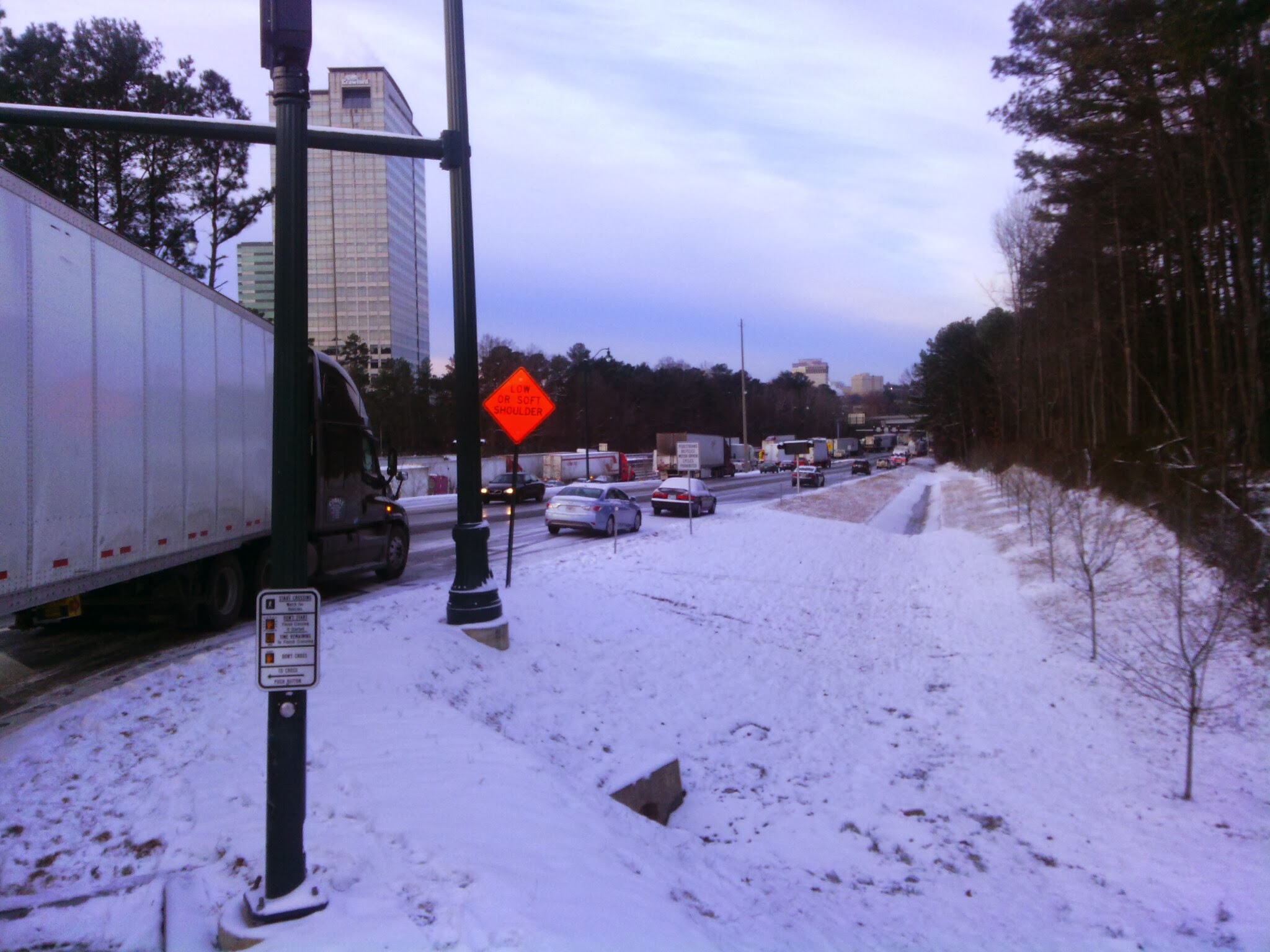 
in a major shtf,the cars would at least be moving,or able to push a disabled car aside.Ice covered roads are by no means an evacuation drill.A terrorist attack,or any shtf scenario,short of a nuke attack,would be isolated to a part of town,not closing all the roads.


Panic closes the roads, and these people panicked. In a terrorist situation prompting a need for sudden, mass evacuation, people will panic again, and the roads will likely get clogged this badly.

Even in a hurricane evacuation you have gridlock, but at least the traffic moves, if slowly.

Anytime you attempt to move this many people over the roads in this kind of concentration, you are looking at this kind of problem - clogged roads with either no movement or very slow movement.

The mayor of Atlanta Kasim Reed , said the mistake was closing everything down and sending people home all at the same time. And that next time there would be a staggered release.You don't have that option during an emergency like a terrorist attack.If People heard the news of multiple dirty bomb attacks, Sarin gas attacks or people being infected with Small Pox around around Atlanta. Everyone is going to try and get out right then. On Tuesday many wireless phone customers lost service.

Having gone through this event...it will make them learn where the weaknesses
are so that everyone can become better prepared.

So... despite the things that happened that seemed awful to those going through it,
each individual family unit needs to walk away and realize what they can and will
do differently the next time. Also the cities/state can learn how they should handle
the situation differently.

Everyone needs to start thinking how can I prepare, instead of always waiting
around for someone to come rescue them. If we all pitch in a try to take
care of our selves and our own situation then the impact can hopefully
be less severe.

A great experience to walk away from and learn from.

posted on Feb, 2 2014 @ 06:56 AM
link
Surly, the National Guard is drilled on a continuous basis, as they are here ( 100 miles North) and everything should be in place for any event. Red Cross shelter set ups, command bases, traffic and riot control, food distribution should all be ready as Homeland Security pays for a lot of the training. My responsibility is to be ready as a temporary command post and/or heliport if the Guard needs it. Also, part of my road frontage may be needed for tents to be set up as to the situation. I also have several sources of fresh water that the guard is aware of.

Your Emergency Management department should have all the plans laid out and ready to go. That was the whole idea of creating the Department of Homeland Security/FEMA to have a Federal overseer to make sure the states are ready with plans to handle any contingent.The ready.gov site should have all the information you need-they better! This is not a request-it's the law. We have another drill the 18th for a flood-like in 2010. It's communication related.

You should be able to go to the Georgia office of Emergency Management website to see all these plans and drills. It's the law.

posted on Feb, 2 2014 @ 07:27 AM
link
What's with the "terrorist attack" obsession? Seriously, the likelihood of being directly affected by a terrorist attack are miniscule compared with natural weather conditions or other disasters.
I know, this is all about preparedness and how to act or handle a crisis, but it makes me laugh when I see "terrorist attack" used over and over again when discussing such issues.

The rest all comes down to common sense, critical thinking and NOT waiting for the government, local or national, to come marching in to save you. Unfortunately, these days, people are so dumbed down that they expect the "authorities" to fix everything and coddle them and, if they don't, they have someone to blame and whine about.


sending them home at the same time was a mistake......even letting the roads be open was insane! The volume of traffic was not the problem,it was the ice and accidents.

I know, this is all about preparedness and how to act or handle a crisis, but it makes me laugh when I see "terrorist attack" used over and over again when discussing such issues.

No, I don't think you know or understand. A terrorist attack is the number one concern among all preparatory agencies. The concern for terrorist attacks far out ranks any kind of natural weather event. The reason is quite simple-Americans have an amazing ability to put their differences aside and help each other in local weather events-that rarely need Federal interaction until after the fact with reconstruction.

The coming tornado season is a just example. People are going to die, lives changed by material loss, devastation will occur in entire neighborhoods. The ability of persons helping each other is part of the healing process-and until after the fact the government stays out of the way.

With terrorist attacks it is the exact opposite. Drills never stop and this time the Governmental response will be swift and prompt-with people understanding that this fight is not theirs to fight alone.

A lady ask me if the drone she saw come over her house had anything to do with the promptness exercise being practiced by the Guard and other locals. I told her it did-although I couldn't tell her why.

Except to say that next time-and there will be a next time-things are going to run much smoother than in New York.