Researchers at the University of Texas at Austin are reporting that they’ve built the first ever one-way acoustic device — a device that lets you hear something, without being heard in return. This breaks a fundamental rule in physics, called time reversal symmetry, that stipulates that if waves can travel in one direction, they must be able to travel in the opposite direction. In short, if you can hear someone, they can always hear you — except, with this new device, that’s no longer the case. 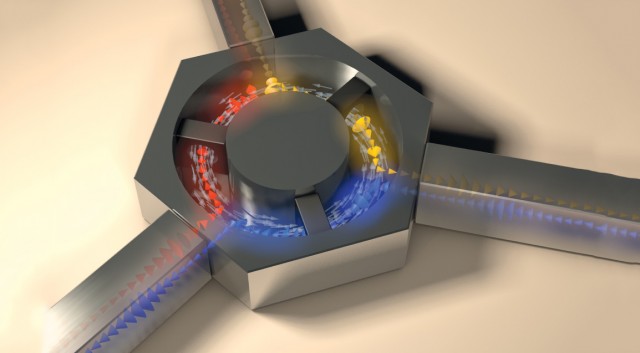 According to the article this device breaks a fundamental rule in physics, called time reversal symmetry. Just thought I would ask my fellow ATS member what they thought about that? And if indeed this is the case?

posted on Jan, 31 2014 @ 02:05 PM
link
The future use for maybe putting one inside a computer sounds awesome to me. Keep the computer price down by using fans instead of liquid cooling but reduce/remove the noise. So cool. Thanks for the article.

When will people learn all this technology is a double-edged sword? When will the scientists working on these projects wake up and realize their great inventions will just be turned around and used as control mechanisms against we the people?

The problem is that the people inventing these things would rather make a name for themselves than stifle the invention and make a better world for everyone. All the scientists and engineers working on all these DARPA robotics projects, MK-Ultra offshoots like Monarch, and NSA spygrid extenders need to rebel against this system and quit en masse.

Better to walk away and leave the world a better place than "succeed" in inventing something that'll just be used to further enslave humanity. Until people start putting the earth and the future of free humanity ahead of their own selfish interests, this death-spirial into technocratic oblivion will just continue accelerating.


I was thinking how neat this would be for isolating rotor noise on my black hawk.
We could do completely quiet night ops with something like this.


The NSA has probably bought these by the truck load! Coming to a public place near you.

This is quite dumb really.


Lets just say there are a variety of applications where this technology will shine, covert or otherwise.

And as the article implies the device seems to negate a fundamental physical rule, If this is indeed true that's hardly considered dumb!
edit on 31-1-2014 by andy06shake because: (no reason given)


What you said makes me wonder if they are using something like this on those supposed "stealth choppers" that were involved in the Bin Laden raid...?


The enemy could have one on an atom or hydrogen bomb that is cloaked and undetectable to radars. War is a two way street.


No, this device doesn't break any laws of physics. Whoever wrote the article didn't do so very accurately.

Also, I don't see any application for this device. It uses standard computer fans to move air in a circle. Those computer fans are not silent. The only way for this device to work is to push air in the direction you want the sound to go, and away from the direction you don't want the sound to go. No matter what you have to push air, and that will create noise, and would not be very covert...

This more of a toy.


They used specially designed sound suppressors on the tipcap of the rotor blades. they also redesigned the rotor head and tail rotor for better aerodynamics and reduced sound. They were still not silent by any means, just less loud. Based on my highly educated guess on the matter of blackhawks, they were probably using T706 GE engines. Those are loud.

posted on Feb, 1 2014 @ 10:52 AM
link
Looks a bit like a radar circulator. We use stuff like this in microwave communications all the time. Didn't think you could build one for sound.
edit on 1-2-2014 by Bedlam because: (no reason given)