Clue to how Coral Castle was built


not sure what you were trying to post there but it's not working. obviously that device doesn't work since it's been printed back in the day, and no one is utilizing it.


Coral Castle has always amazed me.

Its amazing what one guy can do with an electro magnet and some pullies.


While experimenting with the constants of very short waves, carried on by means of quartz resonators, a piece of quartz which was used, suddenly showed a clearly altered appearance. It was easily seen that in the center of the crystal, especially when a constant temperature not exceeding ten degrees C. (50 degrees F.) was maintained, milky cloudiness appeared which gradually developed to complete opacity.

The transformed crystal was so light that it carried the whole apparatus with itself upwards, along with the weight of twenty-five kilograms(55 lbs.) suspended from it and floating free in the air. On exact measurement and calculations, which on account of the excellent apparatus in the Darredein laboratory, could be readily carried out, it was found that the specific gravity was reduced to a greater amount than the change in volume would indicate. Its weight had become practically negative.


I believe this picture is behind the rather cryptic link in your OP. 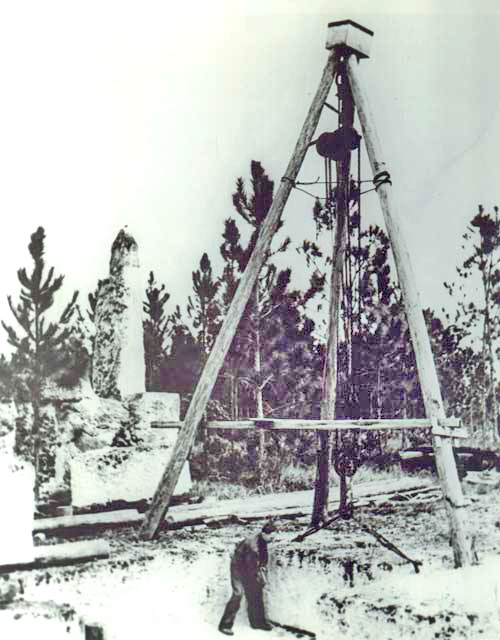 
Thanks for the support!


According to this picture, he's just using a pully system and nothing else. The box on top simply looks like.. a box, perhaps helping to bind the tripod together. It doesn't seem to have anything else to it. Maybe the tripod itself, or the kind of wood it's made of, combined with the pully system is all it took to lift those slabs. Perhaps not.

I'm a big fan of this mystery as well. I do have another theory that I kind of stumbled upon not all that long ago. When I have time, I'll hammer out all the details in a post. I don't know if I'm right, but I would certainly love to know more sides to this mystery because it's really facinating.

The flaw I see in this theory is, the box looks nothing more than a box, as you can see the poles go inside of it, so it's not quartz. Also, there lacks the two metal flats on either side to support the comparison with the first image. Also, if the box was quartz, it seems like the whole tripod would be lifted and not the stone. I think we're missing something here. Maybe the picture was taken in a manner where he didn't want to give up his secret, but if you look close, you can see he's actually lifting a slab with just what you see there.