posted on Jan, 30 2014 @ 04:11 PM
link
U.S. Attorney General Eric Holder was asked a question about Obama Executive orders specifically about the delay of the Obama.Care employer mandate and he sidestepped by saying he has not yet read the legal analysis or at least had not looked at it recently.

Nice twist to dodge the question.

This was a question posed by a Senator in a hearing.

The ironic part is that all Holder may have had to say was that the PPACA law itself may in fact delegate the actual implementation dates of certain areas to the HHS and therefore it may have been "legal" all along.

I don't know for sure about the actual "dates" language, but I'm sure somebody might be able to point to the section of the law that clarifies if and when the employer mandate was set to start on a solid specific date.

The big question is what the impact is of these delays, not so much whether it's "legal".

Many times, delays and exceptions always lead to another problem that may not have shown up without the delay or exception.

The point here is that Eric Holder does not appear to even understand the law either?

But then again, He may be just reacting in his natural way by lying which means he just can't help himself.

Attorney General Eric Holder couldn't explain the constitutional basis for executive orders such as President Obama's delay of the employer mandate because he hasn't read the legal analysis -- or at least, hasn't seen it in a long time.

"I'll be honest with you, I have not seen -- I don't remember looking at or having seen the analysis in some time, so I'm not sure where along the spectrum that would come," Holder replied when Sen. Mike Lee, R-Utah, asked him to explain the nature of Obama's constitutional power to delay the mandate.

Lee had based his question on a standard legal test, first described by Supreme Court Justice Robert Jackson, who said the president's authority to issue executive orders is strongest when he does so with the backing of Congress (category one), more dubious when he issues an order pertaining to a topic on which Congress has not passed a law (category two), and weakest when the executive order is "incompatible with a congressional command" (category three), to use Lee's paraphrase. 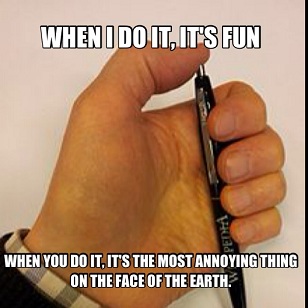 posted on Jan, 30 2014 @ 04:19 PM
link
That is because there are no constitutional basis for forcing people to buy a corporate product.

Remember now it was a TAX.

I can't believe Holder is the highest LEO is this country.

He is the most corrupt one next to his boss.


U.S. Attorney General Eric Holder was asked a question about Obama Executive orders specifically about the delay of the Obama.Care employer mandate

Well Holder certainly couldn't just tell the truth on this could he? That this EO was politically motivated to help democrats facing a tough 2014 election. That would just look bad. 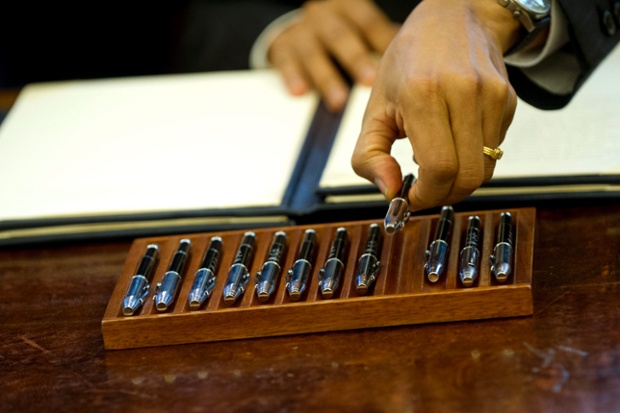 posted on Jan, 30 2014 @ 04:31 PM
link
You can't explain what doesn't exist. There is a loose reference to it in the constitution but it doesn't directly spell it out. It is understandable to see why congress is so upset about EO's because EO's are directed at those inside the government the ones the people should worry about are proclamations those are the ones that affect the people.

Umm, that a 12 pen gauge magazine clip , capable of firing 30 executive orders in half a second .....ghost pen if you will .

Doesn't D.C. have a ten pen clip restriction?
Can we arrest him now?

buster2010
You can't explain what doesn't exist. There is a loose reference to it in the constitution but it doesn't directly spell it out. It is understandable to see why congress is so upset about EO's because EO's are directed at those inside the government the ones the people should worry about are proclamations those are the ones that affect the people.

The question directed at Holder was about the delay of the PPACA employer mandate.

He didn't answer the question.

So maybe we can answer the question ?

Was the "authority" actually in the law? Or was the delay "invented" and executed by Executive Privilege?

buster2010
You can't explain what doesn't exist. There is a loose reference to it in the constitution but it doesn't directly spell it out.

Here you go - the constitutional basis of executive orders


The notion of Executive Orders is contentious indeed, but just as "judicial review" was found and interpreted, or the extent of the Commerce Clause, or Equal Protection, so be it with Executive Action (orders if you want). I don't think Wikipedia is a valid reference, but it does provide a starting point.

The premise falls on Article II, Section 1, Clause 1 which states, "The executive power shall be vested in a President of the United States of America." That alone doesn't clear up the issue, so to back it up, the powers point to Section 3 of the same article and that states, "[the president] shall take care that the laws be faithfully executed..."

That doesn't really give concrete evidence of authority, but that is what has been held.

The general fear of Executive action in the realm of the separate Legislative was identified by Thomas Jefferson, who ironically, utilized such Executive powers that sought to undue his arch-enemy of the political sphere; the Federalist.


“I said to [President Washington] that if the equilibrium of the three great bodies, Legislative, Executive and Judiciary, could be preserved, if the Legislature could be kept independent, I should never fear the result of such a government; but that I could not but be uneasy when I saw that the Executive had swallowed up the Legislative branch.”

According to a journal from Boston University


Jefferson introduced the idea that the members of his cabinet, and most of the subordinate executive officials subject to presidential appointment, should hail from his party

. This journal further highlights the efforts of Jefferson to utilize his Executive power to instill Republican (not to be confused with the modern day republicans) personnel and not, as Washington had, the best person for the job.

In all honesty, it is Hamiltonian that modern presidents have invoked Executive Action.

In all seriousness, I believe the reason why Holder can't explain anything about anything is because he was hired for his skill as a liar and nothing more...but even a liar can't rationalize crimes of the magnitude we are talking about to those whom the crimes are committed against. Not with the recent NSA "revelations" (which weren't really revelations at all if you frequent ATS) about how much lying is going on under people's noses.
You're not looking at an official with integrity at the end of his rope.
You're looking at a snake oil salesman who has just about run out of tricks.

posted on Jan, 30 2014 @ 10:41 PM
link
Why does "Constitutional basis" matter now? Republicans ran on doing the same thing in the presidential election. Go back and look. Using the executive order and "waivers" from "obamacare" seemed to be a priority.