posted on Jan, 30 2014 @ 06:31 AM
link
Archaeologists working at the Giza Pyramids have made several new discoveries. One being a military port and barracks which was discovered by the Khentkawes town. They were being used while the pyramids were being built about 4,500 years ago.

I'm not able to embed the pictures here, but you can see them in the source link.

The archaeologists have been excavating a city near the Giza Pyramids that dates mainly to the reign of the pharaoh Menkaure, who built the last pyramid at Giza. Also near the pyramids they have been excavating a town, located close to a monument dedicated to Queen Khentkawes, possibly a daughter of Menkaure. The barracks are located at the city, while a newly discovered basin, that may be part of a harbor, is located by the Khentkawes town. 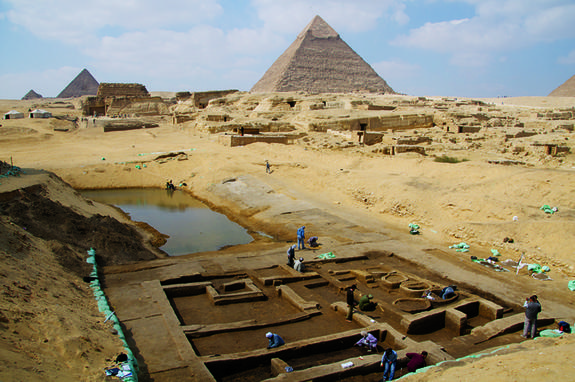 I love stories like this, but my knowledge of ancient Egypt is too poor to contribute anything useful!

Great info though, thanks.


Although we have trained archaeologists they have been 'trained' into a certain mindset and I am not sure that their views are accurate. We also have Dr Hawass who is consumed with the intention of proving that the pyramids were built by the Egyptians and is not open minded freally to any other theory.

But its all theory because there seems to be a divide between the Egyptians having built the pyramids and then having amnesia as to how they achieved it and the idea that we know actually precious little about how and when the pyramids were built or even who was responsible. Sure we know that the earth produced a people that built pyramids, each individually with their own cultural differences etc but just how accurate are we at dating when these stone erections were built or even by whom.

I find it odd that I was reading about a township that housed the actually builders with graves, ovens, workshops etc but that seems now to have disappeared and the theory of the workers sleeping on the different levels of the pyramid seems to have taken over.
I suspect until one can separate the politics from actual historical fact we will still be going round and round in 50 years time.

The only thing that sticks in my mind is that a technology appears to have been lost completely for the movement and construction of these buildings, but that it existed across the globe at one point. I am interested in how this knowledge disappeared and why we can find no real answers to the mysteries surrounding the pyramids and megalithic buildings.

I have always wondered if the ancient Egyptians were not more responsible for the magnificent artwork and carvings of their own history upon these monuments rather that their actual construction. Who knows?


Do you make this stuff up as you go along?

The quarries the stone for the pyramids were cut from, the routes it was transported to the building site, the tools for shaping and moving the finished stone into place, the small cities and "bustling ports" that housed and fed the army of workers that erected them are all in plain view for anyone with half a research interest to follow.


Have they discovered new tools recently then? Last I heard, the tools that have been found nearby were copper. While adequate for working on the limestone outer casing of the pyramid, they would have been entirely incapable of the precision and tooling needed for construction of the inner granite blocks. We'd be hard pressed using today's technology to make something the scale of the pyramids out of such enormous, hard blocks that fit together so precisely.

Could it be that the original (granite) pyramids already existed at the time of the Egyptians, but that they chose to encase them in the limestone to give them they're "smooth" looking appearance? Most other ancient pyramids in the world are of the "stepped" variety, like the granite infrastructure of the Egyptian ones.

While we're on the subject, Robert and Olivia Temple make a very compelling argument in their book "The Sphinx Mystery" that the Sphinx was originally a statue of Anubis, the Egyptian jackal god. They assert that it was carved centuries after its original creation into the face of the Pharaoh as we're familiar with today. They also posit that when it was first built, it was at the entry to a port and was surrounded by water.

posted on Jan, 30 2014 @ 11:17 AM
link
Very interesting OP, thanks for sharing. It seems amazing tat they're still finding stuff in that region all this time later. I mean it just seems like they'd have it already by now!


Exactly what I was gonna say, Lumpster.

I do not buy most of the modern explanations as to how the pyramids were built. To be able to cut granite with such precision is mind-boggling, even by todays standards. Then, to "quarry" granite of that size and transport it would be a massive job with modern tools, rock trucks, cranes, etc.. And to think that they loaded this granite on rafts and brought it down the river......Then stack it to mathematical and astronomical precision? Then, a whole civilization forgets mathematics and other advancements and live very primitive instead? Nope. Not buying it. I've boiled it down to two possibilities: Either there were humans at that time who were more advanced than we are now or it was aliens.

IMO, evidence was found long ago that showed how and why the pyramids were built and who built them, but the elite refuse to allow the other 99% to know about it just so they can keep the sheep in the pen.


All the tools they required. Even a quick glance at pictures will reveal they used a variety of tools and methods, including stone, sinew, (copper), earthen ramps, ships, levers, and surveying instruments. Their walls are covered with pictographs showing their use by workers (stone masons). They invented some (most?) of the tools we still use today.

ETA: The Vanity of the King who wanted the "big-biggest head stone ever" demanded it.

Ancient tools Egyptians used to build the Pyramids
edit on 30-1-2014 by intrptr because: yuck in it up

Shiloh7
Although we have trained archaeologists they have been 'trained' into a certain mindset and I am not sure that their views are accurate. We also have Dr Hawass who is consumed with the intention of proving that the pyramids were built by the Egyptians and is not open minded freally to any other theory.

You might want to update your info - Hawass hasn't been Minister of Antiquities since 2011 when he was dismissed - he also faced a trial for various corruption charges, but I believe these were dropped.


It's a pity that the Library of Alexandria was destroyed, otherwise, they'd most likely have the records of all these ports and slave towns. It'd make these things so much simpler.

posted on Jan, 31 2014 @ 01:07 AM
link
I would like to add something that wasn't mentioned the Egyptians were very smart architects for 5,000 years ago but what I understand as tools that were used copper rope tackle and simple hand tools just doesn't explain how massive Blocks of granite and diorite which are so hard to work with the only thing harder than diorite is diamond and no diamonds have ever been found! The precision of stone cutting is so precise it marvels todays stone cutting techniques! The tolerances
are so precise two ten thousandth of an inch ! Which by our standards is absolutely
incredible ! So I'm at a loss as to how they did this with simple hand tools? They obviously had superior knowledge or had help on building these pyramids at Gaza
Even more surprising is the layout of these three pyramids ! The great pyramid itself rests exactly at the intersections of the longest lines latitudinal and longitudinal of all the land mass of earth! Secondly the three pyramids mimic exactly the three stars of Orion's Belt! And thirdly, the great pyramid's sides corresponds to the four compass headings ! The compass didn't get discovered till thousand or less years later?
Egyptologists and archeologists claim the pyramids were used as burial chambers for pharaohs,but why would you advertise it if that's all you can see for miles!
No mummy or pharaoh was ever found in any of these pyramids at Gaza or the 94 pyramids in Egypt ! No inscriptions or hyrogliphes or cartouche of any kind inside the great pyramid nothing !
So what was it's purpose? Just a big monument; a feat of engineering perhaps
or something else? There was discovered the great pyramid has four inclined shafts eminating from the kings and Queens chambers two shafts point to the circum northern pole stars and the other two shafts point to ready for this? The constellation stars of Orion's Belt
The Great Pyramid was built with the accuracy of a Rolex Watch so perhaps it's functionality was also as the function of a machine? The significance of this pyramid
gets even more stranger you start to put all the pieces together,it has been theorized that the Great Pyramid was a power plant that it generated microwave energy and believe it to be correct!
mainstream Egyptologists and Scientists pose an argument against this! But the proof is in the pyramid itself the grand gallery has 27 pairs of resonators two shafts in the lower Queens chamber mixed a solution of dilute hydroclouric acid in one shaft and the other shaft hydrated zinc to produce hydrogen gas in the Queens chamber then rise up the grand gallery with the 27 pairs of resonators where vibrations from the earth reacts with the gas forming microwave energy and went out the shaft in the kings chamber! Where it went out is
anyone's guess? That's the mystery !
We all Believe that and of course what we
think that slaves were used to build these structures but there are what is the Valley Temples and unlike the pyramids that used three ton blocks on the exterior of the pyramids the valley Temples used 100 ton Blocks to Build these Temples !
The people that worked on these structures were ordinary people that wanted to build for their Pharaoh because they were treated with respect not slaves like we read in the bible or Cecil B Demil's epic version but that's a debate also so o won't get into that one
I just believe that the Egyptians had help from well I'm going to say it ok visitors from elsewhere not from here! Want to call them Extraterrestrial that's fine with me because you just can't move 100 or 200 ton Blocks with all the people in Egypt or the entire continent not possible
there was intervention from a highly evolved species and not human a technology so advanced it's no wonder we couldn't build a pyramid even with what we have today!