Trying to identify what this is

posted on Jan, 29 2014 @ 06:02 PM
link
My son and I were exploring a few weeks ago in an old abandoned gin down the road from us. We live out miles from town . This gin was supposed to have been shut down in the 70's and has just been sitting there ever since. The side door has rusted to pieces and fallen down. It is a huge place and there is a metal cabinet in an office area that had a lock on it but the lock had rusted in pieces as was the cabinet. I opened it and I found something wrapped in old news paper that was dated May of 1934. The day was rotted away. What was wrapped in the paper was what appears to be some kind of staff or walking stick. It is made of wood, very heavy for it's size and has intricate carvings on it. The top was cracked and I could pull it away from the rest enough to see that the wood is a dark reddish brown color. I have been looking on the net a good bit and the closest thing I can find that it looks like is an African medicine man staff but who knows.
I thought you guys might be able to help me figure out what it is. It measures 33 1/2 inches long. 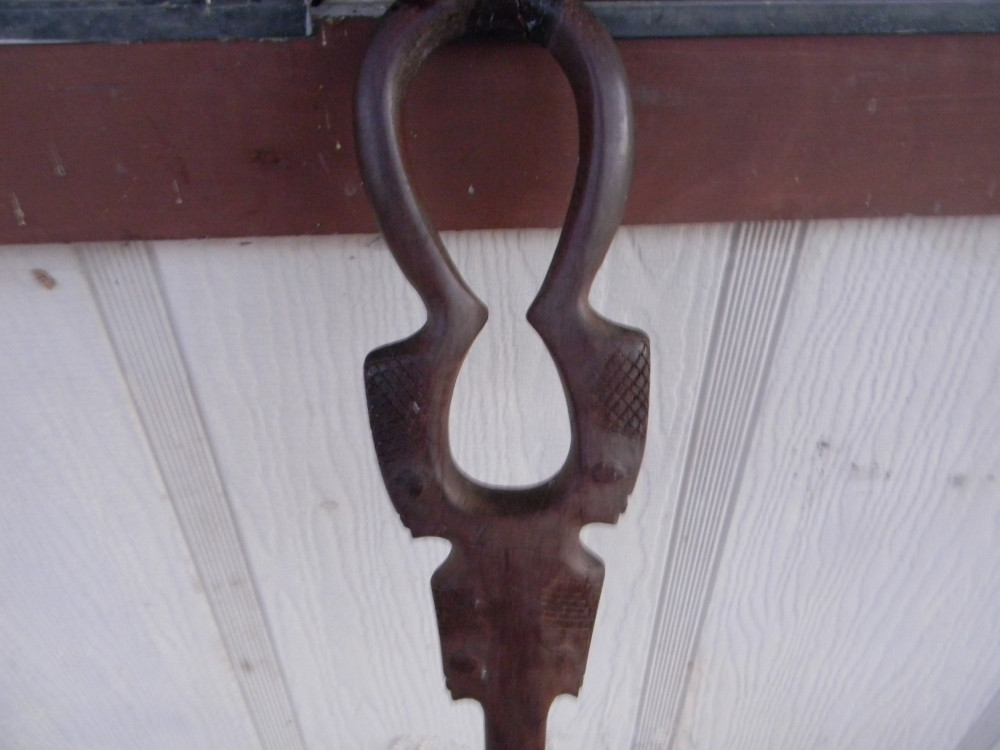 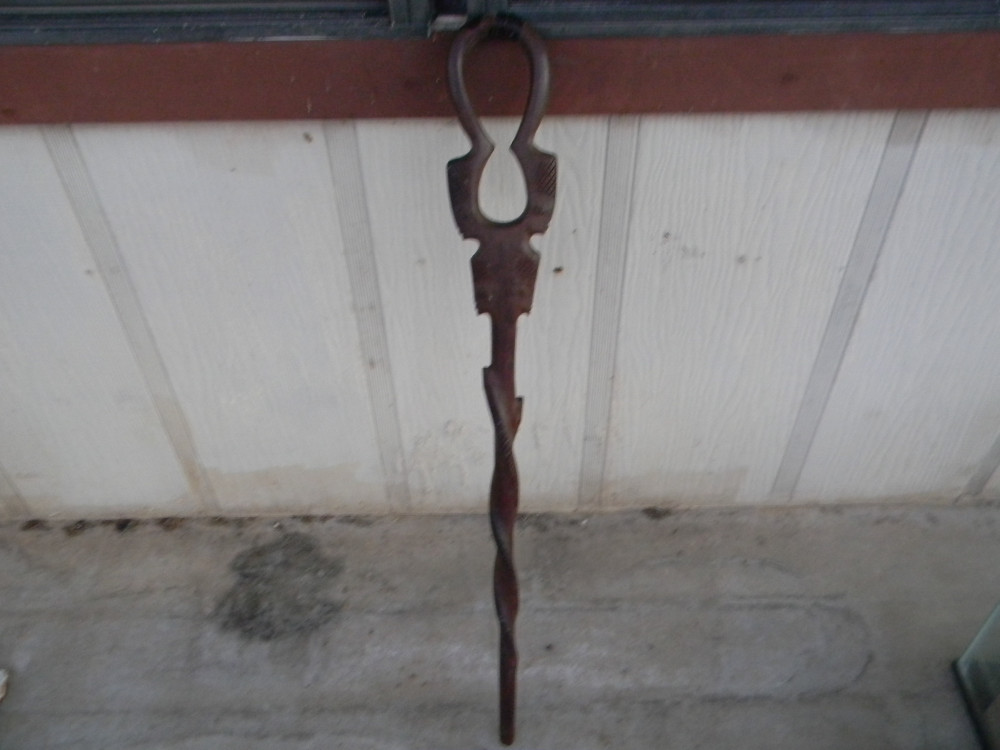 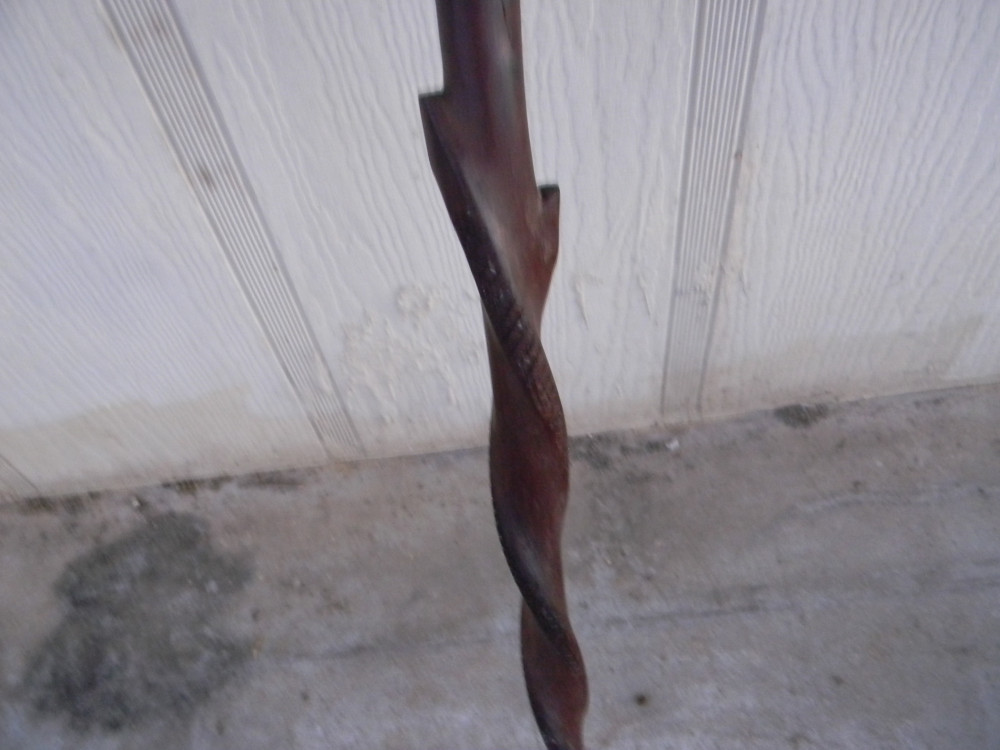 
The shaft looks like a drill bit. Before I read your post I thought it might be an auger of some kind, but after reading it and you mentioned it was made out of wood, forget that thought. It could have some religious significance, but what ever it represents, the way the shaft takes on the shape of a drill, who ever gets the end of that thing is screwed, lol.


I forgot he said it was wood, so my idea is out.

You can see that most of those canes have a circular top and spiral staff.

I think the real question is who owned it or where it came from. Finding those answers may reveal its true importance.

posted on Jan, 29 2014 @ 06:24 PM
link
I am just very curious because the wood is so heavy and dense and the color of the wood itself I've never seen anywhere around here. There are no lathe marks or any other marks except for the ones carved into it. There is a dark spot up top where the crack is. There was a piece of something wrapped around it at that spot but it was rotten and fell apart when I moved it. Also the paper it was wrapped in was so old it makes me very curious.

posted on Jan, 29 2014 @ 06:32 PM
link
Looks like an antique machine part or a wooden drill / screw / gimlet device used for perhaps a soft material, the carvings could be functional for friction and the top of the screw part functional in a way such a rawl plug as in preventing it loosening, the loop at the top also looks functional, perhaps where a rope was attached or some other machinery.

Perhaps part of an old spinning machine or type of corkscrew device or tent peg.


I'm sorry for the confusion, it is an old cotton gin. Where they remove the seeds from the cotton and clean it and spin it.

The gin we explored looked just like this one 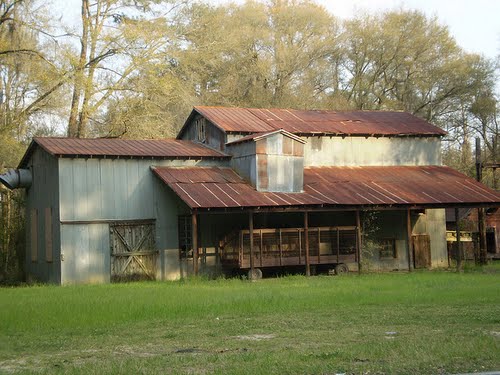 posted on Jan, 29 2014 @ 06:46 PM
link
The way the threads are shaped, it might be a tool to aid in moving or throwing bales. Perhaps even to take a plug out from a bale to check quality?

posted on Jan, 29 2014 @ 06:46 PM
link
I actually have something very similar to this that I got from an old second-hand clothing store in Spokane, it is a beautiful piece of work.

posted on Jan, 29 2014 @ 06:49 PM
link
After you said it came from an old cotton mill ,I started thinking maby it was used for a means of wrapping up the cotton while its being weived on the machine. Not sure though.
Wood looks like Brazilian Cherry or African Rosewood.

posted on Jan, 29 2014 @ 06:51 PM
link
From simply examining the picture, I'd guess it's a walking cane from the late 19th or early 20th century. Canes were an important part of the gentleman's wardrobe in those days and it wasn't unusual to find ornate ones like the one you've discovered. Perhaps it was passed down to the mill's owner, manager, etc. and simply forgotten when the mill closed.
My suggestion would be to take it around to several reputable antique dealers in your area and get their opinion.
Nice find!

posted on Jan, 29 2014 @ 06:53 PM
link
It may be a ground tap for a tent, or some kind of anchor auger for temporary anchoring a tent, tarp or something that needs to be tied to the ground.


Now I know the purpose of the building being a cotton mill, perhaps it was a bore of sorts for planting cotton seed, making a hole in the ground or a spinning machine.
edit on 29-1-2014 by theabsolutetruth because: (no reason given)

posted on Jan, 29 2014 @ 07:00 PM
link
My father in law was just here and he called one of the old timers from down the road and he said he believed that after the gin shut down that it was used as a flea market in the late 70's.