posted on Jan, 29 2014 @ 04:58 PM
link
I'm not a gamer per se, I don't participate in massive multiplayer online role-playing game (MMORPG) like World of Warcraft or EVE Online - instead I might play a non-online adventure game for a short period of time.

But, the world changed not too long ago. Now millions of gamers participate in various different MMORPGs, they're online playing games often in teams, sharing the same goal toward accomplishment with other players.

So to my surprise I just found an article in The Daily Mail that talks not about a MMORPG as a 'game', but instead talks about an epic battle that occurred in the game EVE Online. Apparently over 4,000 players participated in a battle that caused nearly $300,000 worth of damage to their enemy (cost calculated from virtual currency to US dollars).

I've never seen a story written about what happens in a game from the MSM - a story about real people participating in a virtual world and what their actions mean there.

But after thinking it through, it's not surprising. There are millions of gamers so there's an audience for this material in MSM. Virtual currency, time logged on to activities and such can be calculated to real world costs. But the most surprising aspect of this whole thing - it was actually an interesting story (for a non gamer).

Apparently with loads of drama between teams on EVE Online, the battles raging, the strategies used, member reputations, and stunning visuals and such, there are actual stories happening in the virtual world that are interesting if presented properly.

What I'm saying is, I believe we may see the media mine material from games in the future to tell compelling stories about real people playing in a virtual world.

Look out for it - and give this story a read. The hook for writing is obviously the sheer number of people involved in a battle and the monetary loss for a 'normal' reason. But if the media digs deeper they may find even richer stories happening daily in these MMORPGs. And you and I will be reading about it because it will be considered soft news.

Check it out: www.dailymail.co.uk... 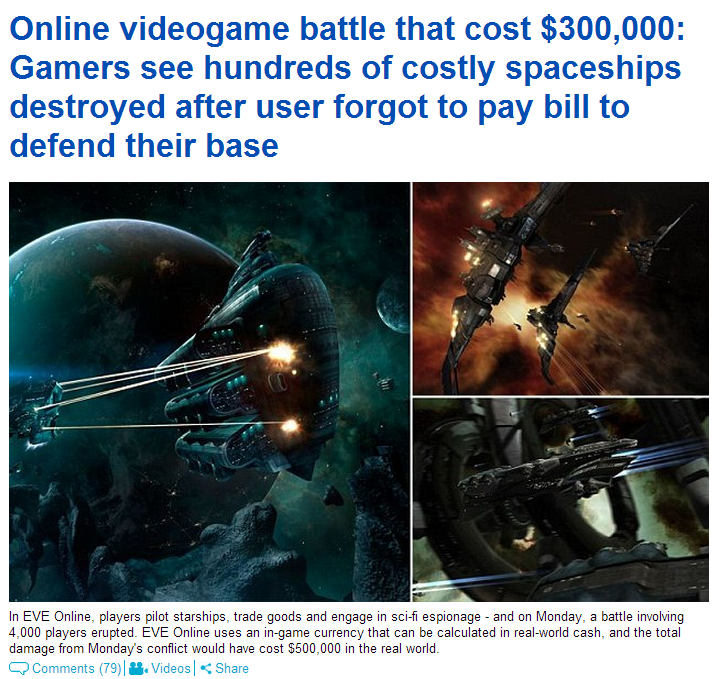 
Oh yeah, free press on the most highly trafficked news site. That alone is probably worth $40K in advertising. Not to mention new gamers signing up to EVE Online...

Still though, it does make me wonder if there's events happening in the games that could be turned into interesting news items. I think there might be...


This doesn't surprise me at all... I play an app game called Please Stay Calm which started like 2-3 years ago and in the early days there was a whole side political game that arose outside of the actual game itself, which led to hacked Apple iTunes cards and creds... Which cost apple a huge amount in losses but no one ever got in trouble...

Lots going on in the virtual world that impacts real life.


I just logged on now to check out EVE online...because of this article.

posted on Jan, 29 2014 @ 10:30 PM
link
I played EVE awhile back and just might renew my membership because of this. The game does have a bit of a learning curve and I wasn't nearly patient enough to learn all the aspects.

Here are some facts and charts. There's also a couple of AMAs on reddit within the link that make for an interesting read.

Around 21 hours of total fighting
7,548 unique characters belonging to those two coalitions participated in the overall battle (i.e. landed on at least one killmail). 6,058 participated directly in the B-R5RB system with 2,670 in system at max
717 unique player Corporations
55 unique player Alliances
CAPITALS DESTROYED


I hope they are crying themselves to sleep.

I don't mind MMO's in general but these online stores don't sit right with me, I couldn't spend so much money on something intangible. A friend once told me he'd spent over 2K on a MMORPG and I was speechless, With that kind of money I have bought a Wii, a PS3, a 360, a guitar, an amplifier, a case of beer...

posted on Jan, 30 2014 @ 04:50 AM
link
I used to play World of Warcraft and I never spent money on the game, other than subscription fees there are lots of ways you can.

The most interesting story I think is of the Chinese "gold farmers". Stories of Chinese prisoners playing the game for hours to earn in game gold which is then sold online and delivered to your character in game.

Also websites where you can pay somebody to level up your character and they wii play them in the arena, promising to win you the best prizes.

Was fun to play and had times when hundreds of people battled, trying to invade the opposing factions main city and kill the king.

posted on Jan, 30 2014 @ 05:41 AM
link
Maybe the players are all hoping that 'TRON' or the 'Last Star Fighter' are for real and they might get whisked away into a virtual world……

Good post OP as i think you are probably correct……there will be stories told about those both in the real and virtual world….good escapism from the everyday mundane…

posted on Jan, 30 2014 @ 06:38 AM
link
I appreciate you're not much of a agmer, but this isn't the first time that the "MSM" have reported on in-game activity for MMO's. EVE often pops up after a major battle and others crop up frequently as well..

One about Second Life way back in 2006

These are just a few examples, but I am a keen gamer and have seen many stories over the years for MMO's. I do remember one about the plague in WoW too - here it is - from 2005

This has been going on for years and is just the media reporting on things we're interested in, not the sign of anything to come.


I hope they are crying themselves to sleep.

I don't mind MMO's in general but these online stores don't sit right with me, I couldn't spend so much money on something intangible. A friend once told me he'd spent over 2K on a MMORPG and I was speechless, With that kind of money I have bought a Wii, a PS3, a 360, a guitar, an amplifier, a case of beer...


I think you misunderstand (and the article itself doesn't make it clear) the ships are only worth that amount if they were to be traded for by the player buying in game currency using their own money - the value is just a theoretical price tag.

It is entirely possible to own one without paying any more than your monthly subscription. I myself have half a dozen Battleships, several mining ships, an Orca (mining capital ship) and a space station, all earnt by trading in game. A Titan might be worth a few Billion ISK, but you can easily earn a hundred million ISK or more by stripping an asteroid belt or trading.

Also, most of the ships that were destroyed would have been built by the Alliances using them and wouldn't have cost any real money.

edit: I know, I know, where have I been the last however long this game has been out for
edit on 30-1-2014 by LightAssassin because: (no reason given)