Fed Chairman Ben Bernanke, who hands the central bank's reins to Vice Chair Janet Yellen on Friday, also adjourned his last policy-setting meeting without making any changes to the U.S. central bank's other main policy plank: its longer-term plan to keep interest rates low for some time to come.

Bernanke is out, Yellen is in.

In my opinion this means many things, not the least of which is that the changing of the head of the privately held Federal Reserve is more significant than the election of a new US President. By looking at their statements from the most recent meeting, they have decided to flat out ignore those who have become discouraged and dropped out of the labor market or those who have aged out of the labor market. As such, interest rates are going to start to go up. This is what we can expect from Yellen.

This will all start on Friday.

Some of his predecessors have questioned his program of buying State and Municipal bonds directly. Bill Hackney was "Horrified" when Bernanke pumped hundreds of billions of dollars into the financial system after the 2008-2009 financial crisis. 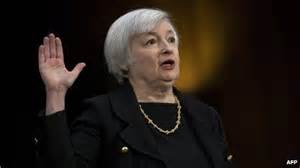 Janet Yellen will become the world's most powerful woman on Feb. 1
edit on 29-1-2014 by mikegrouchy because: (no reason given)

posted on Jan, 29 2014 @ 03:44 PM
link
Janet Yellen will view too-low an interest rate as a "danger", will be portrayed as facing tests both of her predecessors flunked; defusing asset bubbles without doing damage to the economy, and she will do this using two models she advocates; “optimal control” and “communications policy.” This means that she doesn't believe in commodity price standards, and that the Fed will do more to communicate it's intentions.

I wonder if she will do any yelling.


Bernanke is going to leave Yellen holding the bag for the meltdown. She may end up the most powerful today but she's going to become the most hated tomorrow (or pretty soon.)


Janet Yellen, is an old school bureaucrat, it doesn't matter what she does, she will do what those behind the power of the Federal reserve (all private interest banksters) will tell her to do, to preserve the wealth of the filthy rich.

She will not change anything neither accomplish anything that already is been approved by those behind the Fed power, she is been known to have heavy influences on most of Bernanke economic choices and can become Bernanke on steroids and we all know what Bernanke decisions favored so far.

We already has been downgraded under Bernanke's governance, got a economic crisis and the dollar has been so devaluated that our oversea financiers no longer trust the dollar. Bernanke and Walls street has run the biggest Ponzi scheme in history and they are still very much at it.

All we have to know and understand is that Wall street wants her and that is why she got appointed, the rest is just left to the imagination.

"There is a sufficiency in the world for man's need, but not for man's greed." --Mahatma Gandhi

Yup.. Sounds like a common criminal to me. Of course, there is nothing common about that one, but the criminal part is absolutely accurate, in my view. He'll leave the nightmares and math abyss he created for others to ...watch collapse.
edit on 29-1-2014 by Wrabbit2000 because: (no reason given)

Wrabbit2000
Well thanks a lot Ben.... Rob the place blind, then throw some road flares into pools of gasoline on your way out the door... 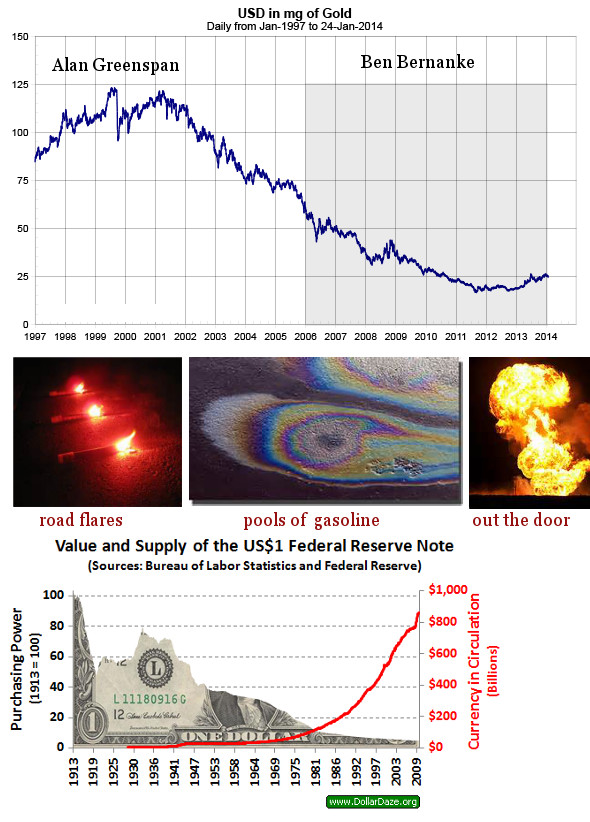 I don't know though, call me crazy, but maybe we will miss Bernanke. If anyone lit everything on fire and then left, it was Greenspan. In my opinion anyway.


Long term? I think Ron Paul is being the old school and decent politician he always has been and saying it nicely. Hyperinflation is a real ugly thing and what the Fed has been doing has a lot of names, aside from insanity. Monetizing our own debt is one though.

I think the problem is, the other part has been spreading funny money all over the world and getting the world totally addicted. Between Military and Commercial aid, some aid went to almost every nation on Earth over the last decade, and generally for each year. Now it's going to be cutting back for austerity reasons at the same time our own house is getting more and more shaky.


Translation - Those Nations who have benefited by that Aid will now see their Standard of Living being Reduced to " Pre Aid " Standards . Food , Clothing , and Shelter will be the first signs effected by it . Next comes Revolution .


The party can't go on forever without means to "sustain it", to use a popular word lately..

I think it may not be real pretty for a bit of time to come. I don't know how long ...but when (or still hoping If) the economy starts to go, it sure will touch all over in bad ways.

posted on Jan, 29 2014 @ 10:52 PM
link
Bernanke got the heck out of Dodge to leave Yellen holding the bag when the dollar crashes.


I don't know about you man , but I see Wars coming to a Country that will lose all faith in their Leaders and Revolt . Africa, Asia , Europe , take you pick .....

If this was a game I'd call it pass the grenade…

boncho
Is it any wonder Bernanke ran cash injections right up to his leaving? I don't think it's a coincidence.

If this was a game I'd call it pass the grenade… 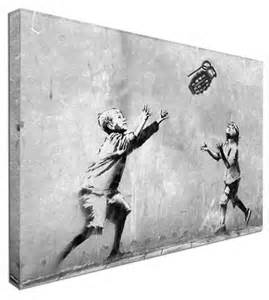 Woah... I rather surprised that I found a picture of that.
From a boy to a girl, no less.

shanegm
Another bilderberg jew? No way! What are the chances of that happening?
edit on 30-1-2014 by shanegm because: (no reason given)


If this comment had just mentioned the Bilderberg group I would have been willing to discuss the implications. But I get the feeling that the word "Jew" was thrown in there in a disparaging way, and to further confuse the issues. Besides, what is the actual point of this comment? That the "chances" can be calculated? No? Then what?


If by "Jew" the comment means, "Well Educated" then sure, yes. 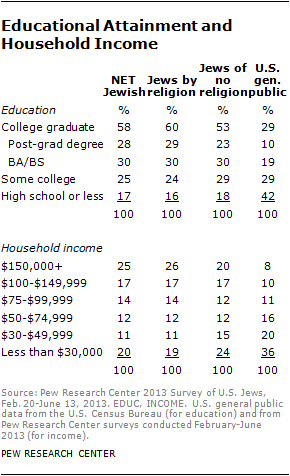 Honestly, my first reaction was to report the comment.