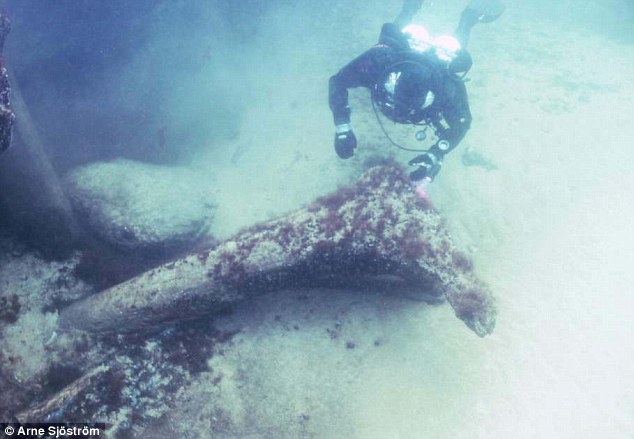 Divers in Sweden have discovered a rare collection of Stone Age artefacts buried deep beneath the Baltic Sea.
Archaeologists believe the relics were left by Swedish nomads 11,000 years ago and the discovery may be evidence of one of the oldest settlements ever found in the Nordic region.
Some of the relics are so well preserved, reports have dubbed the find 'Sweden’s Atlantis' and suggested the settlement may have been swallowed whole by the sea in the same way as the mythical island in the Atlantic Ocean.

The artefacts were discovered by Professor Bjorn Nilsson from Soderton University, and a team from Lunds University, during an archaeological dive at Hano, off the coast of Skane County in Sweden.
Buried 16 metres below the surface, Nilsson uncovered wood, flint tools, animal horns and ropes.
Among the most notable items found include a harpoon carving made from an animal bone, and the bones of an ancient animal called aurochs.

Every time I read news like this it always amazes me how after all this time, we are still finding 'lost treasures'.
Who knows what else we could find in our waters, if we could dive deep enough.

Have a great day,
RR

posted on Jan, 29 2014 @ 08:46 AM
link
Thank you for the post!
Can't wait to see what they bring up!
Just when you think the sense of mystery is gone from this world, something like this happens!

But, from another article that is actually Swedish.


Nilsson admitted that "lousy Swedish tabloids" had blown the story out of the water by labelling the find "Sweden's Atlantis", even though the remnants never belonged to an actual village. The people were all nomadic at the time, he explained, so there was no village. He trumpeted, however, that the finds so far were "world-class" and "one-of-a-kind". He added that was extremely rare to find evidence from the Stone Age so unspoiled.

So to call it "Sweden's Atlantis", is a bit of a strech.


I'm only posting the title of the story, as it is posted.

Yes, I read two news sources for this before posting,and chose the more humble one.

It says it was actually a settlement, and not a village.

Here is the other source: www.unexplained-mysteries.com...

edit on 29/1/2014 by Rainbowresidue because: added a thought


I'm only posting the title of the story, as it is posted.

It's ok, it wasn't meant for you, only the news sources picking it up


Excellent. I am a certified diver and I love reading about discoveries like this. I once dove in one of the infamous Blue Holes in the Bahamas back in 2007. It was very eery, they supposedly only exist in the Caribbean near the Bermuda Triangle, and they are perfectly circular tunnels about 400ft deep or less, with diameters of about 80 feet. It looks like either something entered the Earth there, or exited from it. Like someone just stuck a giant straw in the Earth and sucked out the creamy insides. mmmmmmm.


Nilsson uncovered wood, flint tools, animal horns and ropes.
Among the most notable items found include a harpoon carving made from an animal bone, and the bones of an ancient animal called aurochs.

Well that is not what is in the photo so maybe the photo is unrelated or else they DID did discover something way beyond that.


I'm assuming they wanted to post the most impressive photo of the discovery, and didn't much care whether it reflected the writing or not.

Nevertheless the story got my attention.

I hope more pictures will 'come to surface' -pun intended- of all the relics they've found.

posted on Jan, 29 2014 @ 12:42 PM
link
Awesome thread....I'm sure there are a lot more locations out there yet to be found..Its interesting the date given for this, does coincide with the deluge and final sinking of Atlantis..The daily mail done another piece on an area known as Doggaland,found beneath the waves, which stretched from Scotland to Denmark,Its crazy there are 300 sunken cities in the Medeterranean alone,so this all does bolster the 'theory' of a global deluge and cataclysm..The writing is on the wall it seems!!

posted on Jan, 29 2014 @ 11:16 PM
link
All the best stuff is gonna be underwater I guess. Like the Japanese structure. I wonder how much stuff got covered by strata and Then got submerged. So not only would you have to go underwater but then you'd have to dig into the mud... We need some kind of submarine that can scan the ocean floors for underground/underwater anomalies... First place they need to go is Bermuda. Wait maybe they should go there last in case they disappear forever. And have a rope going to the beach so if they disappear we can find our way to the interdimensional portal. Unless it has a thingy where it slices off the rope and all we get back is a cut rope... O.O


Very cool story. Did you happen to get any pictures? (Ever seen Alien vs Predator? )

I love stories like this Op. There is still SO much more to discover!!!!!


Very cool story. Did you happen to get any pictures? (Ever seen Alien vs Predator? )

I love stories like this Op. There is still SO much more to discover!!!!!


I got the whole thing on DVD. This jamaican guy had an underwater DVD camcorder. It was beautiful. It was shark mating season and there were literally thousands upon thousands of sharks everywhere. They were so legion, they blotted out the sun from above us. They weren't interested in us because it was mating season. They weren't there to feed, they were all too busy with each other. It was like a scene from The Fifth Element where all the flying cars have different planes of traffic and they can fly up or down and join a higher or lower level of traffic. The sharks would interchange lanes every now and then and you'd feel this 12 foot carribbean reef shark just rub up against your side as he swam straight up. They literally acted like we weren't even there, and the guides knew it. There was no danger even though there were hundreds of different species there. Although most of the aggressive species such as tiger sharks and great whites, were not in the area.

I dove about halfway down the Blue Hole. It was pitch black from above, but when you descended down into it your eyes adjusted and it became lit up with a beautiful subtle blue light. Sky blue. I could see one lone sea turtle spiraling his way up the hole and just navigating through the sharks. It was amazing. I came to about 200 feet down, way past the depth of the rest of the group, I love doing that because I'm an experienced diver. I could barely see the bottom of the blue hole. The visibility was that good.