The letter comes from an anonymous person who says that he or she–along with others who contributed to the “notification”–has been involved in the construction and operation of the MetLife Stadium at the Meadowlands Sports Complex.

If it happens, how many thousands could die? How many people sit at the games? ARE THERE MORE PEOPLE SITTING IN AT SUPER BOWLS THAN WERE AT WTC?

What are officials' response to such threats? Are they staging... DRILLS to help be prepared?? 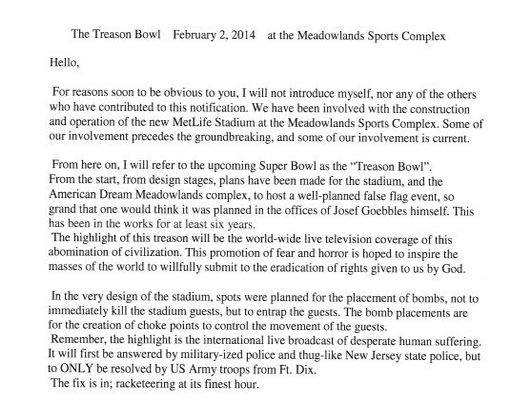 We see it everyday…

What a way to justify expanding The War into Iran, tho.

Wouldn't the 2014 Olympics be more of a world stage event than the super bowl?

Secondly, has anyone contacted the stadium / new Jersey to ask for reaction on the letter, if they are taking it seriously, and if anyone has looked at the Stadium?

There will be workers there who could access these areas and check right?

Absent that I think someone may have been reading / watching The Sum of All Fears.
edit on 28-1-2014 by Xcathdra because: (no reason given)

Another domestic one would be sufficient to just move nextdoor to Afghan, Iraq, Syria, Libya into Iran, finally.

Another domestic one would be sufficient to just move nextdoor to Afghan, Iraq, Syria, Libya into Iran, finally.

Will there be illuminati symbols hidden in them, or in the performance?

Who is going to sing?


Wouldn't the 2014 Olympics be more of a world stage event than the super bowl? /quote]

Methinks this is some troll who thinks America is more important than it actually is.

I highly doubt any of this.

posted on Jan, 28 2014 @ 09:21 PM
link
GAAH! I took a break from work to watch this thing, and I want that 11 minutes back! For eight excruciating minutes, the video recapped dubious connections from a string of conspiracy theories, and only got to this year's Superbowl prediction at ~8:30 mins. Then, the only basis for the theory about a pending false flag at the 2014 Superbowl was that the stadium was mentioned in a Tom Cruise movie, which, by the way, had nothing whatsoever to do with the letter. I guess the video was trying to say that because Hollywood "predicted" various events in the past, it's a for-sure-certified-reality that Scientologist-nutbag Tom Cruise's Oblivion film is the harbinger of Superbowl doomdom for this year.

It's my own fault. I'm like Charlie Brown, running up to kick the football one more time. When will I ever learn?

It's my own fault. I'm like Charlie Brown, running up to kick the football one more time. When will I ever learn?

Probably about the same time I do.