Continuing its rather intimidating streak of acquisitions, Google has acquired the British artificial intelligence company DeepMind for around $500 million. There is no doubt that this acquisition is linked to Google’s hiring of futurist and inventor Ray Kurzweil, and the string of eight robotics acquisitions that ended last year with the purchase of Boston Dynamics, one of the world’s biggest names in robotics. We would not be surprised if there was also a connection to Google’s acquisition of Nest, Google Glass, and its Calico life-extension project. All the pieces are now in place for a Google-created Skynet...

Another large purchase for Google, this one being a company that
specializes in Artificial Intelligence; adding to the recent
acquisition of Boston Dynamics.

The deal was made with an unusual condition, that Google would create
an ethics board for oversight. No details yet on the reason for the purchase
of DeepMind, along with Boston Dynamics, and The Atlas Robot,
though it is fairly obvious where this is headed.
Maybe not Skynet, then again...?

Reportedly, it was Deep Mind that pushed for the creation of an ethics
board as part of the deal; so then we are all good right? No worries?

No details have been released concerning the ethics board - though
one wonders if it will be based on Isaac Asimov’s Three Laws of Robotics?

In the video above, he outlines it (with his odd pronunciation of “robot”).
The code consists of three laws; in his fiction these are hardwired into each robot’s
“positronic brain,” a fictional computer that gives robots something of a human-like consciousness.

Second Law: A robot must obey the orders given it by human beings
except where such orders would conflict with the First Law.

Third Law: A robot must protect its own existence as long as such
protection does not conflict with the First or Second Law.

Asimov's rules may be a good starting point, though it seems
in this complex mix of things there is a large potential for
a future that is exciting, yet dangerous in the wrong hands.
Do you trust Google? Do you trust the NSA?

So many ways this can go, what are your thoughts on this?


Though I see Hollywood as just a stage; one where
those who imagine themselves to be powerful have
an opportunity to shape ideas, people and cultures;
even the future, though I think we have a lot
more power as individuals than we can even imagine.

Pimpintology
I for one welcome our new robotic overlords. LOL

Do you read me Hal?
Open the pod bay doors!


I have had the opportunity to grow up during this age where I have literally watched the gadgets from my favorite sci-fi movies and TV shows come to life (and beyond). Having said that, Terminator is one of my favorites, and I have always felt that it, like so many other good movies, was perhaps a look into our real future.

I would not be at all surprised if we are facing something 'sky-net like' soon. In my lifetime, I can now honestly say that fact IS stranger than fiction.
edit on 28-1-2014 by westcoast because: (no reason given)


What does the NSA have to do with this story?


Being a fan of the Terminator series myself ( though its a bit more creepy to watch
them as of late due to Boston Dynamics recent "creations ) - with Terminator
Salvation being quite a bit more "intelligent" to the end of transhumanism -
it had a good ending too.

It hit me last time I watched it; what was missing was the insight into how
the NSA; and all of the surveillance might play into it. I guess its up to us
to imagine the connections; real as they are...more and more everyday. 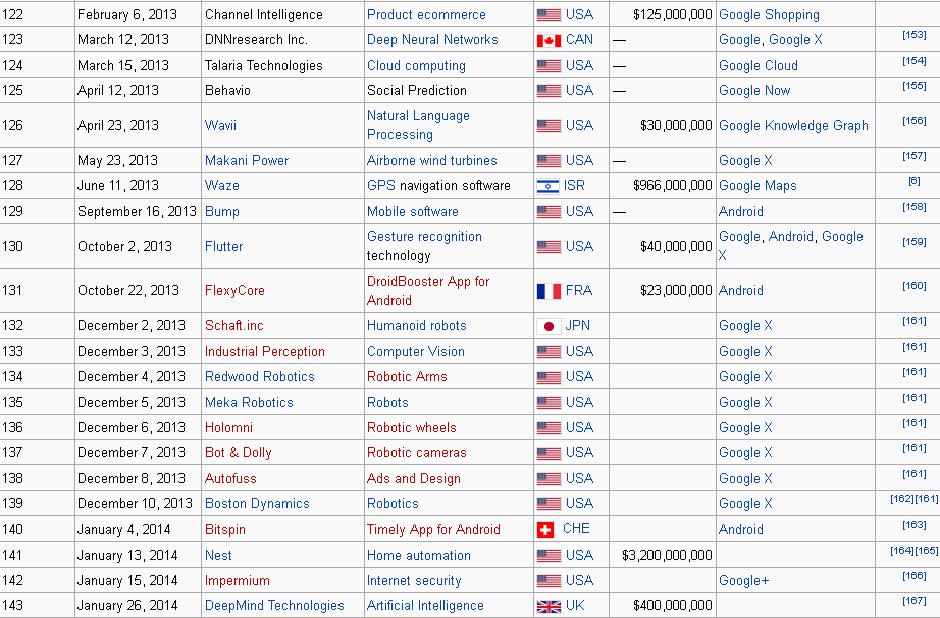 As you can see they've been buying up tech companies like there is no tomorrow. The R&D lab must be something to see back there.

What does the NSA have to do with this story?


What does the NSA have to do with this story?

Actually, you are an NSA automated agent who are programmed to answer this, you just do not know yet.

The GUT
It will never be weaponized or used against the public by "Do No Evil" Google. Right? Right? Hello? Is this mic on?

Hey there dear Gut,
Yeah, they are surely harmless, right?

Not sure what bothers me more; last year I might have said the NSA;
now I am not so sure. What is worse, big brother or google?
Or all of the above in one plus the hardware to go with it.

I think its the purchase of Boston Dynamics that is really
curious, one of these things is not like the other...lol!


Thanks, I was looking for that!

I see several robotics companies on that list, oh joy!

burntheships
I think its the purchase of Boston Dynamics that is really
curious, one of these things is not like the other...lol!


Yeah, surely we wouldn't be looking at a robocop that can scan your ATS posting history on the spot in order to determine whether to shoot you or not haha.


Or...they might do a pre cog on ya and determine that at some
point in the future one would be a member of "the resistance"....

I watched a show on TV last night called "Intelligence". It's about a gov't agent who has a genetic abnormality that allows the gov't to put a computer chip into his brain. He operates as a human and a computer hybrid. It's pretty crazy, but pretty cool at the same time.

I believe we are moving this way, if we haven't already. If the idea is out there, it's prolly already been implemented.


burntheships
I think its the purchase of Boston Dynamics that is really
curious, one of these things is not like the other...lol!


Yeah, surely we wouldn't be looking at a robocop that can scan your ATS posting history on the spot in order to determine whether to shoot you or not haha.


Seriously this video is freaking me out.

'Robocop, future of law enforcement' they say at the end the trailer.

I know what they meant now, it is really coming.

SloAnPainful
"Intelligence". It's about a gov't agent who has a genetic abnormality that allows the gov't
to put a computer chip into his brain. He operates as a human and a computer hybrid.

Will have to look that up since you have me curious now.
(eta thanks you linked us up! )

On that abnormality, do you think that they are searching for those who
have this type of ability? I just read a thread on here about that, though
this also reminds me of another movie....had Bruce Willis in it?

I imagine they are covering all bases, including the "artificial life" platforms
as well as exploiting the traits you have mentioned.

Thanks for dropping by
edit on 28-1-2014 by burntheships because: (no reason given)