NICAP... It's Legacy and a tribute to it's founders

NICAP (National Investigations Committe on Aerial Phenomena) was founded in 1956 by prominent scientist' and military men.

Physicist Thomas Townsend Brown worked with experimental propulsion technologies in the mid to late 50's and was one of the key founders, however was forced to resign from the civilian regulated agency.

In 1956, the aviation trade publication Interavia reported that Brown had made substantial progress in anti-gravity or electro-gravitic propulsion research. Top U.S. aerospace companies had also become involved in such research (see United States gravity control propulsion research), which may have become a classified subject by 1957. Others contend Brown's research simply reached a dead end and lost support. Though the effect he discovered has been proven to exist by many others,[by whom?] Brown's work was controversial, because he and others even believed that this effect could explain the existence and operation of unidentified flying objects (UFOs).

The term "Ionocraft" dates back to the 1960s, an era in which EHD experiments were at their peak. In its basic form, it simply consists of two parallel conductive electrodes, one in the form of a fine wire and another which may be formed of either a wire grid, tubes or foil skirts with a smooth round surface. When such an arrangement is powered up by high voltage in the range of a few kilovolts, it produces thrust. The ionocraft forms part of the EHD thruster family, but is a special case in which the ionisation and accelerating stages are combined into a single stage.
The device is a popular science fair project for students. It is also popular among anti-gravity or so-called "electrogravitics" proponents, especially on the Internet.


The term "lifter" is an accurate description because it is not an anti-gravity device, but produces lift in the same sense as a rocket from the reaction force from driving the ionized air downward. Much like a rocket or a jet engine (it can actually be much more thrust efficient than a jet engine[1]), the force that an ionocraft generates is oriented consistently along its own axis, regardless of the surrounding gravitational field. Claims of the device working in a vacuum also have been disproved.

Donald Edward Keyhoe was an American Marine Corps naval aviator, writer of many aviation articles and stories in a variety of leading publications, and manager of the promotional tours of aviation pioneers, especially of Charles Lindbergh. 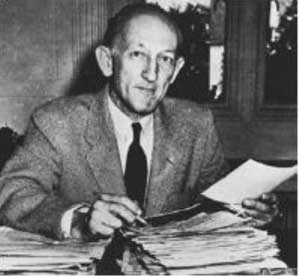 Keyhoe was commissioned as a Marine Corps Lieutenant in 1919 after completing a Bachelor of Science Degree at the US Naval Academy.

After some investigation, Keyhoe became convinced that the flying saucers were real. As their forms, flight maneuvers, speeds and light technology was apparently far ahead of any nation's developments, Keyhoe became convinced that they must be the products of unearthly intelligences, and that the U.S. government was trying to suppress the whole truth about the subject. This conclusion was based especially on the response Keyhoe found when he quizzed various officials about flying saucers. He was told there was nothing to the subject, yet was simultaneously denied access to saucer-related documents.


Keyhoe's article "Flying Saucers Are Real" appeared in the January 1950 issue of True (published December 26, 1949) and caused a sensation. Though such figures are always difficult to verify, Captain, Edward J. Ruppelt, the first head of Project Blue Book, reported that "It is rumored among magazine publishers that Don Keyhoe's article in True was one of the most widely read and widely discussed magazine articles in history."

I found the following interview on the "Mike Wallace Interview" (1958) very interesting. Less than 10 years after the "Roswell Incident". Not knowing that Keyhoe even had knowledge of the incident in 1947. Keyhoe discusses the documents from the Dayton, OH ATIC to the CMR GEN of the Air Force stating categorically that "these things (UFO's) exist" and that they are "interplanetary spaceship's".

posted on Jan, 28 2014 @ 04:30 PM
link
Will we be talking about NICAP's infiltration by psy-ops/intelligence adepts? That aspect interests me a lot. Good thread, btw.

posted on Jan, 30 2014 @ 08:55 AM
link
Major Donald Keyhoe established the UFO tenet of the government cover-up. He believed that the government had a knowledge and understanding of flying saucers, but was keeping it secret from the public. This notion is built into the UFO belief system, but is it true?

The members of Project SIGN were openly talking about their ideas about what flying saucers were, and it was from this chatter that True Magazine's editor, Ken Purdy got wind of the story, assigning it to Donald Keyhoe. The first sources Keyhoe turned to were military, and they gave him material and case details that he used to create the article he would later expand into a book,"Flying Saucers are Real."

Shortly thereafter, Navy Captain Robert B. McLaughlin had a True Magazine article detailing UFO sightings by military personnel at White Sands Proving Ground. McLaughlin's testimony as an actively serving officer gave the topic an air of legitimacy and a big boost in the public eye. Keyhoe incorporated McLaughlin's cases into his book, citing them as key evidence.

In my mind, something does not compute. If all of his material came from military sources, then where is the cover up? Certainly the Air Force and the military in general had operational secrets during the Cold War, but there is no reason to automatically assume that it related to UFOs.

It seems that when Keyhoe asked and didn't get an answer he liked, he called it a cover up. The real cover up seems to have been more about real military secrets and the inadequacy of Project Blue Book. I think that Major Keyhoe did a great job in bringing the study of UFOs into the public eye, and that's what he should be remembered for.