Now we have cows setting fire to stables due to their farts :

Methane gas from 90 flatulent cows exploded in a German farm shed on Monday, damaging the roof and injuring one of the animals, police said.

High levels of the gas had built up in the structure in the central German town of Rasdorf, then "a static electric charge caused the gas to explode with flashes of flames," the force said in a statement.

One cow was treated for burns, a police spokesman added.

The fire apparently started off by the methane gas reacting to static electricity from a massage machine...

Right back to what I am deciding to eat tonight.... beans on toast maybe?
I will definately not be asking Mrs R for a massage tonight.

Every farmer know that a stable with live stock needs to be well ventilated cause of the risk of explosion from gasses building up. 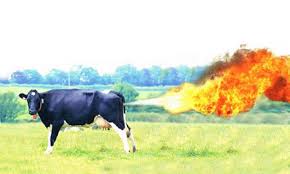 
No steak for you also tonight then? 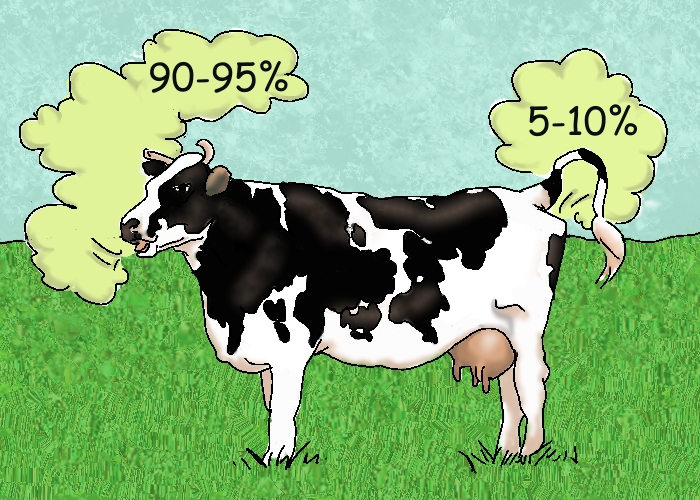 
I always thought it was their burps that did more damage this way...... I know it must be true because Stephen Fry said so and he knows absolutely everything.

posted on Jan, 28 2014 @ 11:16 AM
link
Terrorist suicide bombers. I suppose the government security agencies will try to take the control away from the agriculture departments now.


Well I'm fecked then as I am surrounded on three sides by cattle fields.

Plus I may have to think twice about this old past time: 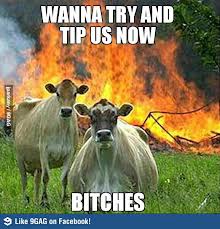 
You have to ask yourself, if this can happen in a barn, why isn't it happening with all the flatulent cows in congress, the senate and any parliamentary government? Of course, since politicians know they are full of sh*t, they probably opted for extra fans.


I just choked on my morning coffee


I just choked on my morning coffee


And end up on Bestgore?

No thanks, just attach them to those drones that you have over in the US and fly them in and drop them on the enemy.

posted on Jan, 29 2014 @ 02:24 PM
link
This is just a cover story for God's sake. The NSA had a secret networking installation there, and since the Snowden interview, thay had to get rid of it fart...sorry fast.

This could have tipped the balance of power back in WW2.