Thought this was an interesting article. I had no idea that as trees get older they actually grow faster and because this goes against the grain (pardon the pun ) of what many people believed in. That larger trees are not as effective as smaller trees at pulling CO2 out of the atmosphere...

It makes intuitive sense to use that most living things, us included, have a growth spurt when they're young, and then slow down or stop. But in a new paper titled Rate of tree carbon accumulation increases continuously with tree size published in the prestigious scientific journal Nature, scientists explain how they've found that this doesn't apply to trees; in fact, the inverse is true. Older ones grow faster than younger ones. This is an important finding because it goes against a widely held belief that large trees are not as productive as small ones when it comes to taking CO2 out of the atmosphere. 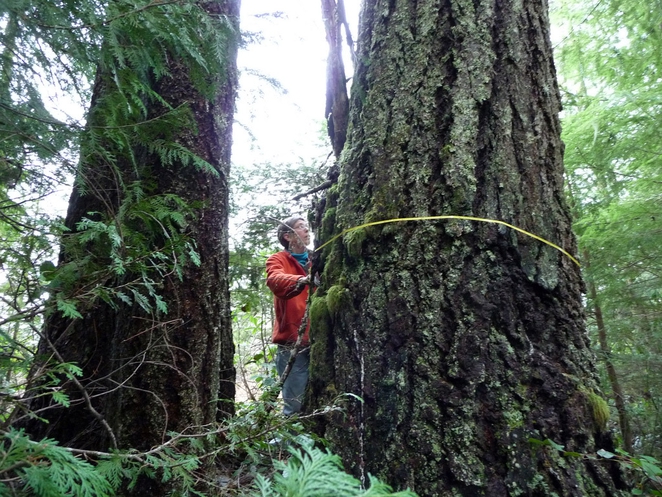 The researchers looked at 403 tropical and temperate species of trees, and found that 97% of them were growing at increasingly faster rates as they aged.
...
Even trees that aren't growing taller keep getting wider and thus turn CO2 into wood at increasing rates.
The study was a collaboration between 38 scientists around the globe and was based on 673,046 individual trees using 80+ years of data. Now that's a broad sample!

Well you learn something new everyday..! Shame we do not get more productive as we get older...

posted on Jan, 24 2014 @ 12:44 PM
link
It make sense that big sturdy trees do a lot of cleanup chores. Thanks for the link and info. This gives ammo to groups wanting to stop the wanton cutting down of old growth forests, should there be any of then remaining
edit on 24-1-2014 by aboutface because: (no reason given)

Don't we shrink or is that an old wives tale? (is it about their husband?) My mind just wandered into a bad dark place. lol

posted on Jan, 24 2014 @ 01:02 PM
link
It is misleading, although they do mention that it doesn't man they grow taller-faster. Young trees grow taller faster than old trees.

That said, this should not be a surprise to scientists that trees get increasingly bigger as they age. It is simple geometry. Trees grow at the boundary of the bark and cambium layer. The internal cells are fixed "dead" cells used for water transport. Even if trees grew only one cell wider per cycle, it is geometrically impossible that the next layer diameter be smaller than the previous. This diameter increase translates to a huge volumetric increase whereby the total cells added must be more than the amount added by previous seasons growth.

In the real case, there could be year-by-year exceptions caused by a a year of excessive growth followed by a drought year, but the overall trend would be an increase in total cells added per yer over the previous year.

Im not sure why this discovery is interesting.

Why did you bother posting in the thread then.. Shall I now refrain from posting any articles or information that I find interesting or important because some members may not find it interesting...?

Each to their own I suppose...

I found it interesting and thought maybe some members of ATS would too. Like a previous poster mentioned it might stop them cutting down older forests with larger trees in them as they are more effective at taking CO2 from the atmosphere...

Our results resolve conflicting assumptions about the nature of tree growth, inform efforts to undertand and model forest carbon dynamics, and have additional implications for theories of resource allocation and plant senescence.

I do not think that there is anything wrong with wanting to be an educated and informed citizen of Earth...


I am not a qualified scientist. Yet I did know that trees get increasingly bigger as they age. I think most people know that. However like I said in the OP I did not know that the older trees were more productive than the younger trees.

I am confused when you say it is misleading. To what extent... Awaiting further particulars....


Slightly off topic but yes people can and do shrink as they age.. Apparently you can begin shrinking from the age of 30...


Oh i dont mean to be rude im just wondering why something so basically logically sound and obvious is deserving of a thread like this.

You know elephants eat a lot of food.


I meant that the article does little to clarify height vs 'bigger' until nearly the last line. The immediate idea in most people's heads is that older trees would also grow taller faster than young trees while the opposite is true.
Tree Age-height graph The graph is a good general example of a typical tree height growth rate. The rate (steepness of line) tapers off considerably with age. I didn't mean that the concept of more growth per year as a tree gets older is misleading, just that it will mislead the average reader to think height as opposed to mass. Hence, misleading. The study is very clear, just the article about it should be more clear up front.
edit on 24-1-2014 by Halfswede because: (no reason given)


Well.. maybe I am an idiot and did not know this or had not thought about it before...

I just did not realise that as trees get older they grow faster. I thought it was like most things as you get older things slow down. That was what was new to me..


Ahh I see. Well I understand what they meant..

They grow bigger when older at a fast rate (&consume more)..


Well.. maybe I am an idiot and did not know this or had not thought about it before...

I just did not realise that as trees get older they grow faster. I thought it was like most things as you get older things slow down. That was what was new to me..

No need to delete, but I think most people are surprised that it took a study to realize this. Imagine a roll of paper towels. To wrap the inner roll, it takes maybe a 1/4 sheet of PT, but to wrap a full roll once it might take a sheet and a half. If you think of the mass of the PT as the growth, it is pretty apparent that "science" should have seen this even if the average joe didn't think about it.

And you aren't an idiot for not thinking of it before. It's not coffee table conversation.


I think they are referring to the fact that humans reach adulthood at which point they do not get taller or gain mass at anywhere near the rate they did when younger (unlike the trees). If you are referring to obesity, that is not the normal course of growth.


I think they are referring to the fact that humans reach adulthood at which point they do not get taller or gain mass at anywhere near the rate they did when younger (unlike the trees). If you are referring to obesity, that is not the normal course of growth.


Yes I was referring to obesity.

Not normal as huge trees but these days obesity is pretty normal... Must say we got skin which can adapt to different sizes, a tree can't get smaller later on like we could. It's not as flexible in that sense, even though we got rubber from some trees