Haven't long to post right now because I am on my lunch break, but I had a strange experience last night, and wondering if anyone has had the same or similar or perhaps some thoughts that may help shed some light on my experience.

I woke up in the early hours of this morning, which is nothing unusual as a I often have broken sleep, however this time when I woke I rolled over and saw a head floating above my my girlfriend who was asleep beside me, just a head, no neck or any other indications of a body, and the head was completely bald, the colour was a lightish brown and semi translucent. When I first saw it I thought I was just imagining things, did the usual, you know scrunched up my eyes and shook my head several times but the apperition did not go away. It was a human female face and I got the impression of Neferiti the Egyptian queen by the look of it.

I remained remarkably calm during the whole experience and then promptly fell straight back to sleep, which is very unusual under the circumstances. Just to expand I am a little psychic and read tarot cards, but never have visions, I get a sense of things bt not images as such. As I said at the time I remained calm but now I do feel a little spooked. There was something there but I have no idea what, I got the head was maybe 8 - 10 inches away from my girlfriend staring straight at her, and I felt it was sort of reading her mind in some way.

I believe that when we sleep our energy changes and becomes more receptive . What amazes me is you went right back to sleep . I have had experiences but was unable to go back to sleep.And never just a head


I recently started a thread about that very subject because it shook me up so much that I honestly thought I'd been awake when all the evidence pointed toward me still being asleep.
edit on 1/24/2014 by wtbengineer because: (no reason given)

davethebear
Are you sure that you were not still asleep, dreaming that you were awake? I have done that on many occasions.........


That, or that twilight/hypnogogic sleep just before truly awakening, where the eyes are open, but the mind is still dreaming.


Next time, catch it. Paranormal experience can become dangerous especially when you show fear which is seen and felt as a weakness and nourishment (for some) by them. Making contact may proves really more rewarding than just shaking in fear or just observing although the latter way is a safer way as long as you control your emotions. But these experiences are opportunities imho. Too bad they are wasted because of old superstitions...

posted on Jan, 24 2014 @ 07:57 AM
link
Well, I have had a similar experience, and to this day, I am not sure if it was real or if I was in some kind of weird dream state. It was when my daughter was much younger, about 7 years old. She loved sleeping with me whenever I would let her, and this one night, I did. At some point in the night, I woke up and looked over at my daughter. I saw the head of a man right over her face. It was not extremely solid - it was kind of wispy-looking. He was looking at her face and smiling. And yes, strangely enough I sort of fell back asleep, although I felt like I wasn't totally out. I then saw in my mind a vision of a man who was obviously dead, and he looked like he had been crushed. In my mind, I knew that he had been in a terrible car accident. I remember thinking "don't show me the children, that will upset me too much." Why I thought that, I have no idea. I then became more awake, but in a very relaxed state. I somehow "knew" that this guy, whoever he was, was attached to my daughter for some reason, and it was his head I saw over my daughter.

For the next couple of hours, I just lay there having thoughts toward this guy like, "you have to go away - get away from my daughter...", etc. What's weird is that I would have a thought that didn't feel like my own thought. The word "No!" popped up in my thoughts. Was that just my imagination, or was he responding to my demands for him to leave?? Don't know, but I spent the next hour or so repeating very firmly in my thoughts that he needed to leave NOW! Finally, another thought that didn't feel like mine said, "I'll go."

I let my daughter sleep with me the next few nights, because I was a little concerned (of course I told her nothing of my experience). Nothing else ever happened.

I have never had an experience exactly like that before, and haven't since. I don't know what it was, but it was strange. And I am a middle-class, middle-aged, college-educated woman, not prone to fantasy. Very, very weird.

posted on Jan, 24 2014 @ 08:35 AM
link
It has be said that some entities, ghosts for example can decide only to show certain parts of their form if they wish. Like cases where all the form was there, hands, arms, head, legs, but the eyes were not present. Also some people have seen ghosts or apparitions in which the legs were visible and nothing else.

posted on Jan, 24 2014 @ 10:28 AM
link
I don't have an answer what this means, but from our experience it was there for a reason, good or bad, but I assume from what I have experienced, an adjustment is how I define it. Also, I think emotional states can bring these to us.

A year or so ago, my wife woke with an orb the size of a golf ball, white and glowing come out of her head, hover in front of her and then go over and hover just over my head. Like you, she was calm and accepting of this event. We both felt the effects of it the next day. The next night, I woke in discomfort, rolled over and saw a glowing woman in white beside my bed. I was mentally urged to close my eyes and sleep, oddly I did immediately.

Then this spring my wife was very upset with family greed and was sitting on the toilet of all things. Out of nowhere, her long dead aunt manifested in front of her, told her "Tell your sister we know you did not do these things, we know". Then her aunt went away. In this case she has a phobic sociopath sister whom keeps lying and accusing to further her own nest, where my wife is the opposite and has problems dealing with greed and lies.

posted on Jan, 24 2014 @ 10:45 AM
link
The feelings you describe in your post are similar to something I experienced some time ago. I roused from my sleep one evening and squatting down next to me just staring was a unnaturally pale woman with short -very- red hair and completely black eyes (I know... cliche, which is why I loathe to share this). I scrunched my brow and stared back in a kind of wonder but I felt absolutely no fear simply peace and wonder. I began to feel fairly sleepy, I then simply rolled over towards my fiancé and went right to sleep. Though it did seem completely real, the nature of the appearance of the potential apparition caused me to dismiss it as some odd waking dream state that simply felt completely real. 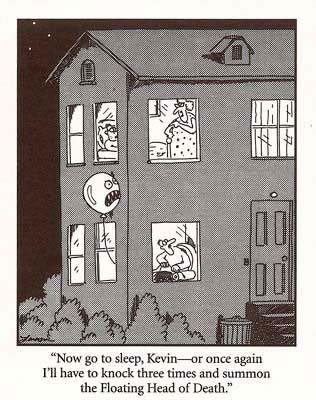 Perhaps you were a bad boy?

Good one.
I was reminded of Mr. Mackey's floating head in the South Park episode where he got high.

i can understand why some think I was still in a dream state, to be honest if I read this post I would think exactly the same myself.

I was quite awake, what is disturbing me the most is I know my reaction should of been different, I knew the head should not be there, and that I should of investigated it, yet I fell back asleep, something that never happens when I wake during the night, it always takes me at least 30 minutes or so to get back to sleep, I did move my position several times to get a better look the head did not move, was completely still just staring down at my girlfriend and then I was just asleep again, Hard to say if I fell asleep myself or was somehow induced to sleep. I don't believe I fell asleep naturally though.

When I woke again I felt concerned, although peaceful at the time, it felt sort of wrong when I woke up again, I cant explain what happened. I have studied the paranormal and as I said in my first post I do have some psychic ability but this has me at a total loss, I have no idea or any sense of what happened

posted on Jan, 24 2014 @ 01:05 PM
link
Its most likely a hypnagogic hallucination. Basically you are waking from REM sleep and your dreams are sort of overwriting reality. You should go to a sleep doctor and see why you are having “broken” sleep and waking out of REM.


No idea what you saw but the first and only time I have seen a figure (I saw the whole figure not just a head) I did the same thing you did and fell right asleep. I was awake at the time but was not tired in the least and right after the figure disappeared through my wall I fell right asleep.


I pretty much agree with this.

I have had lots of experiences in between sleep and awake that I thought were paranormal - floating heads and eyes and the like.

One night I woke up to see accelerometers above my head.

That convinced me it was my brain playing tricks.

posted on Jan, 28 2014 @ 01:54 AM
link
Well that is kind of unnerving. I had a dream yesterday night about a floating robotic head, which is an unusual occurrence in my usual dreams. When I saw your post it was just... weird.

I see this is an old post, but I wanted to reply to you as I too had a similar experience quite a few years ago. To this day I still can see it vividly.
I was asleep in bed, and when I rolled over, I saw a male head floating above my then boyfriends head. It was bald, and all I saw of it was the head and neck. It reminded me of Mr. Clean with that bald head and white complexion. I remember looking up at it, and it looked down at me. I closed my eyes hoping that when I opened them, the figure would be gone, but it was still there and still looking at me. I flipped over again and covered up my head. I fell back to sleep shortly after.
To this day (and I believe it's been 13 years now) i can still remember it quite well. I have always wondered what it was and why it was there. The guy I was living with at the time was an alcoholic

Joking aside that is very much like my experience, can I ask have you had any other paranormal experiences?

posted on Oct, 14 2016 @ 04:46 AM
link
a reply to: PrinceDreamer
as a kid i had a fever, and i got theese images in my head, of this floating bald head repeating words in a robotic voice, like it was trying to hypnotize me,but i wasn't dreaming