-Warning- I wrote this a little loopy on Benadryl so it may all be wrong and seem disjointed. My allergies are angry right now. VERY angry.


We've all heard of these towers by now, but this latest news is rather troubling.

I don't have much sympathy for the guy that essentially sparked this ruling. Sounds like a dirtbag. Just a heads up I'm barely even going to mention him in this thread. I would think there would be better ways of tracking him than what you're about to read though. Or at least a better way of not potentially violating the rights of a bunch of other people in the process.

So here's what it is. 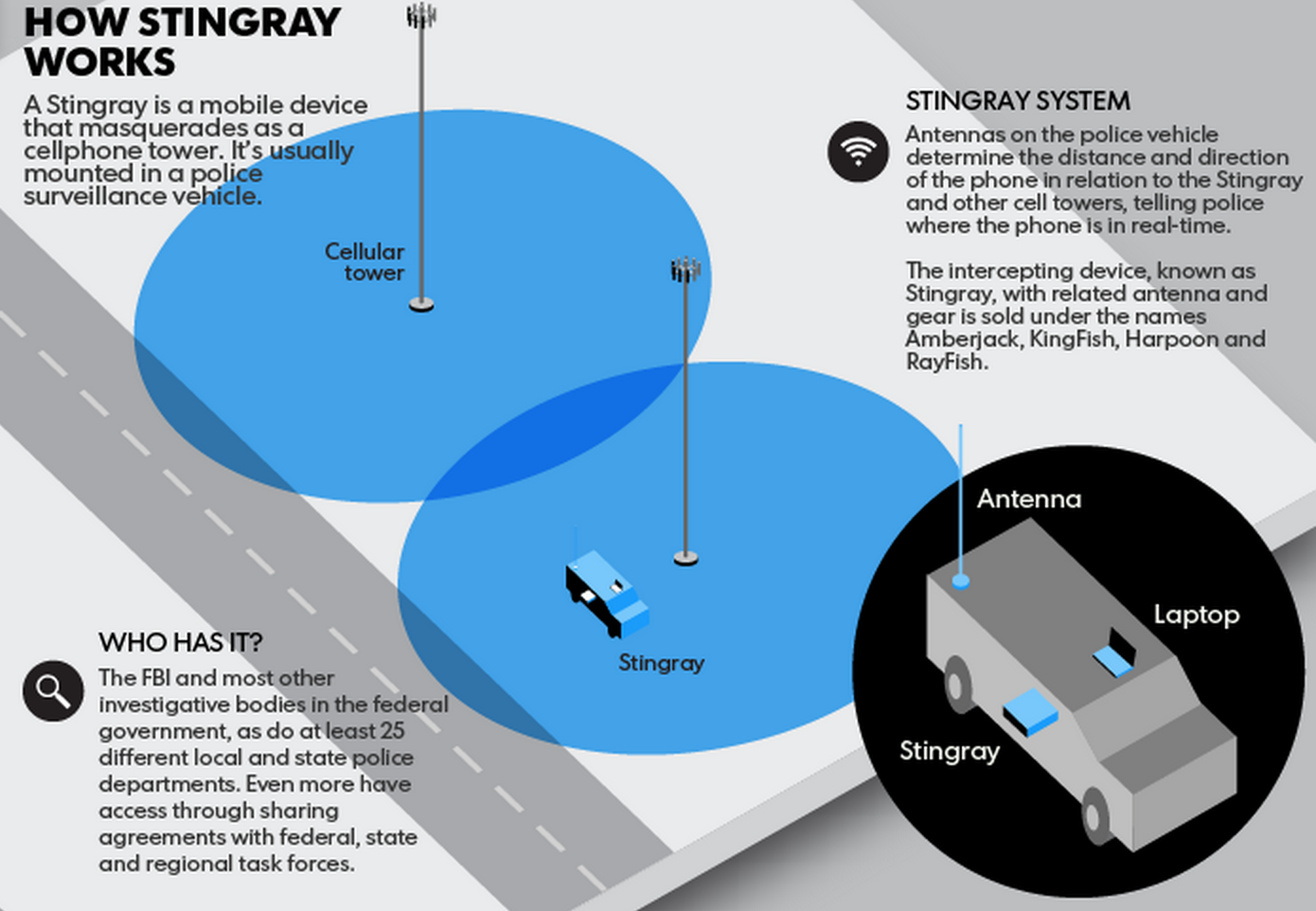 Stingrays are designed to locate a mobile phone even when it's not being used to make a call. The Federal Bureau of Investigation considers the devices to be so critical that it has a policy of deleting the data gathered in their use, mainly to keep suspects in the dark about their capabilities, an FBI official told The Wall Street Journal in response to inquiries.

The feds use them hoping to have the phones of people they're tracking connect to the device (instead of a real mobile phone tower), and then using signal strength to figure out how far away they are. Do that a few times and you can triangulate someone's location, even if they're not making a call, and without having to ask the telcos for any location info (which, so far, they've been more than happy to turn over anyway).

Armed with new technologies, including mobile devices that tap into cellphone data in real time, dozens of local and state police agencies are capturing information about thousands of cellphone users at a time, whether they are targets of an investigation or not, according to public records obtained by USA TODAY and Gannett newspapers and TV stations.

That's a little freaky. The 4th Amendment stuff aside, I would have thought this to be illegal according to the FCC. I don't know much about it, but I thought interfering with another device (without a warrant or whatever) is illegal.

I was a little surprised to learn how many departments are doing this. The technology is currently cost prohibitive for smaller departments, but that will change and the prevalence of these devices will increase. They are suitcase sized and mobile. Move it into a neighborhood where you want to gather info on a certain someone and end up gathering records from all the other cell phones that mistakenly connect.

It seems to be an easy way to skirt getting a warrant, and I do wonder what exactly happens to all the data gathered from those not deemed a target. What happened to having enough to obtain a warrant, then contacting the service providers and having ONE person's data?

The court also didn't seem to much care about the DOJ hiding its use of the stingray from judges:
The judge also ruled that the government was not in the wrong for failing to disclose to a magistrate judge that it planned to use a stingray to track the defendant, or to explain to the judge how the tracking device it intended to use worked. He characterized this information as a “detail of execution which need not be specified.”

Well I think it's an important detail. Failure to disclose this is like a cop breaking into someone's house they suspect and getting enough info to then get an excuse for a legal search. Yeah the hunch may be correct, but that doesn't make the practice acceptable. Also it's more like breaking into every house in a wide area.

The prosecutor, Frederick A. Battista, said the government obtained a "court order that satisfied [the] language" in the federal law on warrants. The judge then asked how an order or warrant could have been obtained without telling the judge what technology was being used. Mr. Battista said: "It was a standard practice, your honor."

I think that may have something to do with certain technological advancements not being covered by that language.

Last week, the feds argued that they should not have to explain how they tracked Rigmaiden, because it would reveal too much information "since its public release could harm law enforcement efforts by compromising future use of the equipment."

WOW. So we may have just violated the crap out of the 4th, but we shouldn't have to tell you if we did or not because terrorists. I kinda see their point, but I also think it's a crappy one. These 'towers' are the kind of thing I only want to see used in the gravest of circumstances. Imminent terrorist attack (and I mean legit).

Apparently these devices only can locate a person. Well what's the source on that? LE? The guys that don't want us to know about the thing in the first place? How do I know that's not around the corner or further down this slope that we all seem to be slowly falling down? With judges like this will we even know?

I don't know why I'm bitching. Somewhere every glorious naked picture I've sent is stored, along with my phone conversations and emails. I pity the poor bastard that ever gets assigned to me, but I doubt that will happen because I am incredibly boring. I have nothing to hide, but I'd rather it all stay hidden.

The crappy part is I WANT the FBI and CIA and NSA to succeed. I WANT them to be good at what they do. I want them protecting us from people running scams, and terrorists, and The Olive Garden. I just don't want to lose what I want them to protect while they're doing it.

what if they never cared about any of the "terrorists"

the movie sneakers said it best. No More Secrets


Haven't seen 'Sneakers' so I'm not sure which one of us took more Benadryl but I'm giving you the benefit of the doubt and assuming it was me.


Haven't seen 'Sneakers' so I'm not sure which one of us took more Benadryl but I'm giving you the benefit of the doubt and assuming it was me.


i'll have your benedryl tho domo!


You can have a beer and a star. That looks like a good watch.

WOW. So we may have just violated the crap out of the 4th, but we shouldn't have to tell you if we did or not because terrorists. I kinda see their point, but I also think it's a crappy one. These 'towers' are the kind of thing I only want to see used in the gravest of circumstances. Imminent terrorist attack (and I mean legit).


Or on the other hand I'd rather let fate take its course and if I'm about to get killed in an attack, oh well. Terrorism is bred out of policy. Every - single - instance.

In other words, terrorism = political failure.

And in the current setting, usually blowback. * Or in many cases, false pretences for political progression on money making schemes.

A live and let live mentality is amazing. Not only does it work in your personal life, it seems to work right across the board, except that many do not adhere to it. Supporting them is the first thing you can do to violate this mantra. Either side.


Boncho, I want you comments and thoughts about the other things in the OP. We can argue terrorism later. I know you like poking buttons, but I really would rather hear what you think about everything else. Pretend I misspoke about terrorism. Ignore that part. I think you're a smart chap and want your opinions on the false cell phone towers first.

I'm having trouble figuring out who to accuse you of shilling for, but stop it. You stop it.


since i didnt really comment on the proper OP i think i would liek to add, that this is quite dispicable, and not explaining to the judge the exact details because it might "compromise the integrity of further investigations" is a mega cop out.

the USA used to stand for something in the world.

okamitengu
what if what they do, is only this.

what if they never cared about any of the "terrorists"

the movie sneakers said it best. No More Secrets


Hasn't it been completely obvious all along that the American people would be the eventual victims of the spy apparatus that's been going up under the pretense of stopping terrorism?

The only question I ever had was how they would turn it around on us and how long it would take.

Sure does seem to be crashing down, this little house of cards.

We've 'liberated' SO many countries; I wonder who will be first to return the favor?

I wonder who will be first to return the favor?

They better airdrop some adult diapers because I will crap myself if any country ever gets ballsy enough to mess with my Red White and Blue.


Boncho, I want you comments and thoughts about the other things in the OP. We can argue terrorism later. I know you like poking buttons, but I really would rather hear what you think about everything else. Pretend I misspoke about terrorism. Ignore that part. I think you're a smart chap and want your opinions on the false cell phone towers first.

I'm having trouble figuring out who to accuse you of shilling for, but stop it. You stop it.


Well, I think you made a very solid judgement by not looking at the individual case. I don't know what else to comment. Without warrants and specific targets (where there's no accidental interception) I do not see how this should be legal.

Also, the technologies are developed by private companies, which means they can be used by security contractors, intelligence, (if not being used already), and for them to become a standard within law enforcement, I simply think it's too much power in the hands of mere humans.

Humans are weak. We don't manage control over others very well.

Also, failing to disclose things in court cases, I thought this was already covered. You know, with the disclosure thing…

posted on Jan, 26 2014 @ 03:35 AM
link
I'm having trouble coming up with a good reason why location data is currently illegal or unconstitutional. What's the difference between a machine watching where you go or a public investigator following you? A PI is even available to a private citizen to track whoever they want.

There are issues of scale to argue over, particularly when you get into location behavior analysis, and using that to determine innocent/guilt (or even precrime) which a machine can do unlike a human.

I'm against blanket data storage with these devices for that reason, but when targeting an individual for a specific reason I'm having a real hard time figuring out why it's wrong when other less high tech methods of accomplishing the same thing are ok.

posted on Jan, 26 2014 @ 03:56 AM
link
We have really used similar technology ever since the cold war. DME or TACAN ghosting was a tactic to confuse enemy navigation systems, make them sync in on a faked beacon, and obtain location of forces.