Site contains an inscription in Greek with the names Mary and Jesus, says excavation director Dr. Daniel Varga • Church is believed to be 1,500 years old, dating back to the Byzantine era. 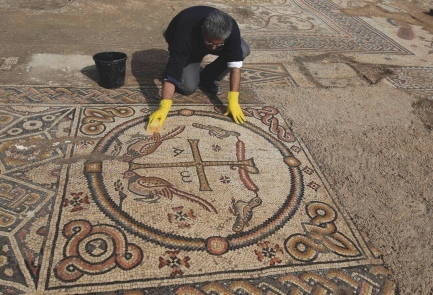 Among the finds were a colourful mosaic and five inscriptions that attest to a once-vibrant Christian community in the region. 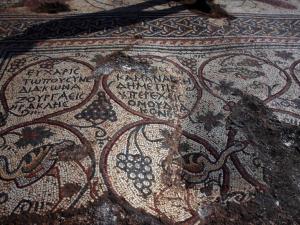 
It looks to be in great condition! the colors are so bright! I know they say they were digging for a housing project, but they have been digging around like gophers since finding that treasure list. Great place to look for stuff !


Firstly this is about the subject and it's connotations and not the thread author whom has heilighted a very serious matter.

Typical, I am a christian but part Jew of direct maternal descent so don't get on the anti semitic band wagon ok, the Israelis will build there housing over and desocrate this ancient and important christian site so where is UNESCO when you really need them eh, this site need's protecting, this was a region that was fully christian and the Syrian orthodox church which is being attacked, victimised and murdered by Al Quaeda in Syria is the true christian legacy of the messianic jew's whom followed christ so it is a direct legacy of the jewish synagogue's not the Khazerian converts and it is being expunged, and it has some of the oldest christian catacysm in the world, Mary is very important as an intercessor and though it split in two and half joined the catholic church because of enmity with the orthodox church, NO THEY DID NOT GET IT FROM THE CATHOLICS ok.
This was a vibrant christian country which was conquered, enslaved and slaughtered by First period islamic army's (so anyone saying Islam is a religeon of love and peace is a blatent liar) and has been corrupted to that until the crusaders (Whom where not true christians but barely pagan savages and also murdered the local christians) came and for a short period reclaimed it for themselves then it fell back to the islamic army's, now it is under the Khazerians and they are often seen to be murdering palestinians and have a hatred of christians (despite the fact as proven by Genetic study that the Palestinian population of all persuasions has more beni coen genes than the israeli immigrants have).

What was done and is used by the Isreali state as an excuse by the Nazi's was truly horrific and unforgivable and it did happen but what the modern israeli state is doing to many equally innocent people is also unforgivable to the same degree and two wrongs never make a right.

But what we in the west are doing is even more unforgivable as we are fostering the community's of those whom are opposed to our very existence amongst us and killing our own children by doing so.

Thanks for sharing it with us. It's interesting to see that the mother son combo ideology goes back at least as far as this and no doubt further back again.

I'd be interested to know where the earliest recordings of mary being an intercessor are actually.

*edit* A quick google search reveals that she was mentioned by church heirachy as early as 110 ad in a defense of people taking about her. source


Though there are many revisionist historians (the very worst kind) whom try to make christianity out to be a third century invention the last word's of christ on the cross to his apostle whom he loved where "Behold your mother" and to his mother "Woman behold your son", the apostle whom symbolically is the archtypal christian in that he is identified as the apostle christ loved then took her to his home as his mother, meaning that she is the mother of all Christians.
And if they say otherwise then HOW can they be christian's.

posted on Jan, 23 2014 @ 04:30 PM
link
Very interesting, especially for all those Christians who run from Mary. But is it his mother or his wife? That's the question!


Oh Man. There is heaps of ignorance out there in a dya when the word is so open for all to see. See past tradition. Mary was a human being born of humans, but she have birth to a god/man. But we are given life by the Spirit not our flesh. Mary has no biological link to you and I. She also has no spiritual link to you and I. She is the mother of Jesus yes, but we are born of the spirit, and the spirit came fro m Jesus. Mary is not spirit. get past this Mary nonsense. I'm looking forward to meeting her one day but she hold 0% influence toward my salvation and 0% towards yours.


the original poster didnt raise any of these issues, they just seemed happy to being us a great piece of art from times long gone before.

dan brown didnt make anything up, he stole everything he thought from holy blood holy grail...
besides that this was a piece about the discovery of a beautiful mosaic, that is being recovered ... and you turned it into your own rant to suit your own ego. please take your ideas about the early church and the oppression of orthodoxy and create your own thread.
hell, link this one if you want a point of reference. but leave those of us who just want to appreciate the recovery of lost art in peace.

of course he admitted that, he was being sued by the authors of holy blood holy grail...
i wouldnt admit to stealing ideas either if i was being sued.

of course, that doesnt fit what you want to believe.